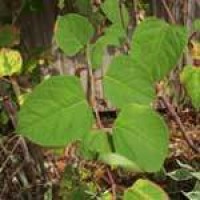 A superweed spreading throughout the UK could be brought under control by introducing plant-eating predators from Japan, scientists believe.

Japanese knotweed was first introduced as an ornamental plant, but has since plagued the environment; removal is costly and time consuming.

Now a team has identified natural predators from its native home that could also control it in the UK.

The plans have been submitted to the government for approval.

If the proposal gets the go-ahead, it will be the first time that biocontrol - the use of a natural enemy to control another pest - will be used in Europe to fight a weed.

All this week, BBC News will be taking a closer look at some of the alien invaders that are in the UK.

This year has been particularly bad for knotweed spread in the UK.

James MacFarlane, vegetation adviser for Cornwall County Council, said: "The weather patterns have ended up with us seeing a lot of knotweed spread in a number of areas."

In Japan, the original home of knotweed, the plant is common but it does not rage out of control like in the UK.

Dick Shaw, the lead researcher on the project, from Cabi, a not-for-profit agricultural research organisation, said: "In 2000, we went out to Japan to see whether the plant had any natural enemies that it had lost when it came here.

"We found that it had a lot: there were 186 species of plant-eating insects and about 40 species of fungi."

The team then began to test the predators to find those that only had an appetite for Japanese knotweed - and not any other plants.

Those that attacked any plants other than Japanese knotweed were ruled out, explained Dr Shaw.

Eventually, the list was whittled down to two: a sap-sucking psyllid insect (Aphalara itadori) and a leaf spot fungus from the genus Mycosphaerella.

Dr Shaw told the BBC: "We have done some efficacy trials here in the lab and they are showing a significant impact."

Dick Shaw shows the effects of the sap-sucking psyllid on Japanese knotweed.

Successful biocontrols do not eradicate the target weed - this would mean wiping out their only food source and effectively making themselves extinct - but they do bring them under control.

Dr Shaw said: "The psyllids are having an effect on the plants' height and the treated knotweeds produce tiny curled leaves rather than big light absorbing leaves, which means that less resources will get to their root system.

"The nymphs are literally sucking the life out of the plant," he added.

Japanese knotweed, like many other non-native, invasive plants, was first introduced to the UK for horticulture.

Its 3-4m-tall (10-13ft) stems, ornamental leaves and clusters of white flowers made it an attractive option for gardens.

Simon Ford, a nature conservation adviser from the National Trust, said: "Japanese knotweed first came into the UK in 1840 through Wales - but it was only about 10 to 15 years later that people started to see it as a threat."

The plants grow incredibly quickly - some have been shown to grow four metres in just four months, they can spread at a tremendous rate, and they can quickly obliterate any other vegetation growing nearby.

Mr Ford said: "By the time they realised this it was already far too late."

Today, Japanese knotweed is prevalent throughout the UK.

It has not only caused great damage to plant biodiversity but it is also causing problems for hard structures, including buildings, paving stones and flood defence structures.

It has been estimated that to remove all knotweed from the UK would cost several billion pounds.

Cabi scientists believe that natural control could offer a much simpler solution.

Dr Shaw said: "In comparison to the current control methods, if it works, this will be significantly less costly."

The team has submitted its proposals to the government.

The Department of Environment, Food and Rural Affairs (Defra) along with independent peer reviewers will assess the work before it is submitted for a public consultation.

Dr Shaw said: "We do not know if this is going to be the silver bullet for knotweed, but if we were able to just stop the thing spreading at the rate it currently is, or make it easier to kill, I will be very happy."

The research project has been paid for by a consortium of UK sponsors including Defra, the Environment Agency, the Welsh Assembly Government, Network Rail, South West Regional Development Agency and British Waterways, coordinated by Cornwall County Council.