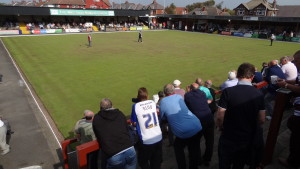 Pitchcare were privileged to be invited to attend the British Crown Green Bowling Association All England's Men's Championship hosted at the Waterloo Bowling Green on the 17th September. Pitchcare have been advising on the maintenance and products that have produced the turf this season.

The day was unseasonably warm and the atmosphere at the stadium was friendly and tense as local player Joe Urmson had played up to the quarter finals. Unfortunately Joe was knocked out by Craig Newton of Yorkshire though the local support provided an exciting match.

Many players commented on the improvement in the green saying that the green had a lot more reach than it had in previous years. Mark Audin the Green Keeper has undertaken an incredible amount of work in preparation for this game and also for the Champion of Champions game.

At this late stage of the season and with such high standards of play, much of the play hasn't ventured into the corners because the pace of the green has been so quick, even the notoriously heavy hotel corner. Understandably given the footfall over the turf through this season, up to 40 jacks regularly on the green in practice, the crown had burnt off a little. The high temperatures and lack of rainfall during September have contributed to this surface but as we move into October we're now looking to turn the condition around with the end of season renovation.

The weather has been incredibly kind and the warm ground temperatures will hopefully enable the Johnsons Premier Green seed to germinate and grow away rapidly as more reliable autumn rainfall arrives.

The fertiliser for the green has focused so far this season on relieving stress and encouraging consistent growth. This strategy has worked well providing good coverage even at the very end of the season but with a change in the weather and the presence of turf diseases such as Anthracnose and Fusarium evident it's now time to give some thought as to how to proceed into the autumn; Anthracnose is indicating that the grass is under stress which will have to be alleviated. However given the disturbance in the thatch layer that will take place with the air injection and over-seeding it would not be wise to provide an abundance of easily degraded nitrogen that would force growth, particularly amongst the endemic Annual Meadow-grass which would produce lush growth that will be susceptible to Fusarium which is already present bubbling away in the background.

We'll be considering applying nutrients such as Phosphite to help alleviate stress and biostimulants such as BioMass Sugar to stimulate beneficial micro-organisms to assist the green through what could be a potentially tricky autumn transition before considering traditional high potassium autumn fertilisers such as the slow release Lebanon Country Club 8-4-24 to maintain that consistent growth into what will hopefully be as benign an autumn.

In the intervening time the green will be regularly scrutinised to jump on any imminent outbreaks of disease and treated quickly with a fungicide such as Interface to ensure that the grass coverage remains high and the famous Waterloo green has an even better start to 2015.