1 All weather racing - a success story at Kempton Park 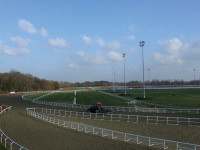 Kempton Park's £18.78 million all-weather track is at the forefront of a new age for horseracing, which saw more than 6.15m visits to racetracks in 2011.

The Middlesex course hosts ninety-five fixtures a year, eighty-four on the all-weather, and also steps in with extra race meetings as the British Horseracing Authority and Horserace Betting Levy Board moves to address loss of income when turf fixtures are cancelled due to ice or snow. 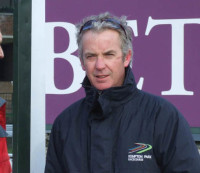 "It's a moveable feast," says director of racing Brian (Barney) Clifford. "These fixtures are often arranged at short notice, so the racecourse team works hard to fit the meeting alongside existing conference bookings and make logistical arrangements, such as getting stewards, doctors and vets, as well as marketing the meeting to trainers and to racegoers."

Kempton Park is also famous for its national hunt racing and finished 2011 on a high, with a record fifth win for Kauto Star in the course's flagship King George VI chase making headlines around the world.

"It was an emotional day for everyone, and the meeting was a huge success," says Barney.

There's a distinct contrast between the buzz and glamour of a Christmas national hunt meeting and an icy weekday night on the all-weather, when all but the most hardy racegoers stick to the grandstand and only see the action via the television screen, but Barney states that the two sides of the business complement each other.

Barney, a former jockey, who trained as a clerk of the course at Sandown Park, came to Kempton Park in 2000, and after a stint overseeing both Kempton and Wincanton, was appointed to the technical group created to develop the all-weather project in 2003. Construction began in 2005, with the brief that the layout should work for both the new all-weather track and the existing turf course. "The all-weather is laid out as an oval on the inside of the jumps track, overlapping after the finish post and at the end of the back straight. Previously, national hunt horses had to cross the old sprint course after the finish, which received a lot of water and thus presented very different going," Barney explains. "They now run onto all-weather on the bend, and cross a raised turf area which makes the ground more level and consistent, and I believe there is far less risk of injury as a result."

Large volumes of water needed to produce the ideal all-weather going necessitated investment in a state of the art irrigation system, which uses a high capacity ring main fed from a borehole with a 86 cu.m licence via powerful pumps to Briggs reels and booms. The irrigation system can put 25mm of water on the entire track in forty-eight hours, which also benefits the turf course.

The surface itself was commissioned from Martin Collins Enterprises and is a new generation Polytrack mix of sixty-three percent silica sand, recycled materials and binding waxes.

"Water is added to give 'life' to the surface - in direct contrast to turf, the warmer and dryer it gets, the slower the going - and to prevent 'kickback' which is uncomfortable for horses and riders. Our maintenance programme is dictated by the air temperature and moisture - the material also generates heat and, with an air temperature of 22OC, the ground temperature can be 48OC, so the aim is to get water on and keep it to a temperature of around 20OC," explains Barney. 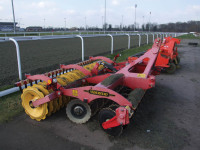 Minimising excessive compaction is also important to provide a consistent, safe surface - the aim is to achieve the equivalent of good-firm going on the turf.

Preparation for racing involves using a Kuhn power harrow to 4in deep and a rotavator to 5in to break up any compaction, with a Vaderstad disc cultivator on heavily compacted areas such as crossings.

The Cousins Gallop-Master, which combines spring tines with cage rollers to condition and level the surface, is then used to a depth of 3in, with 4.5 and 5m units working wheel to wheel to give a consistent result across the course.

"Eventually, the material begins to break down and the surface is given an annual audit by Professional Sportsturf Design Ltd to ensure that its co mposition is right, comments Barney. "We have a very good relationship with the manufacturer, which uses Kempton Park as a training academy and Martin has actually run his own horse here!"

Results from the most recent audit have indicated that a top-up will be needed in 2012, rather than a simple rewaxing, which can sometimes rejuvenate an all-weather track. Some 700 tonnes of sand plus wax will be added in the summer and incorporated by the autumn at a cost of £250,000, which will give the material an extra five or six years' lifespan.

With more prestigious fixtures and trials on the calendar, all-weather racing has moved away from being the poor relation to its glitzy turf cousin.

"Owners are increasingly sending higher class horses to run at Kempton Park and, from the famous colours lining up in a maiden race, you might think you are at Epsom on Derby Day!" says Barney. "We are used for preparation races for horses heading for the Dubai racing festival, and our qualifier for the Kentucky Derby was a huge success."

Sadly, the economic climate has restricted the opportunities for global racing challenges but, with the divide between turf and all-weather narrowing, group race winners often start their careers at Kempton, and the course offers the opportunity to spot a star in the making when young horses gallop on the all-weather before being auctioned at the Goffs Breeze-Up sales.

Existing facilities were adapted to cater for the differing needs of the all-weather racing audience, with the grandstand ground floor refurbished to offer an 'indoor racing experience'.

Even when Britain shivered in sub zero temperatures for evening meetings at the beginning of February, racegoers - if not jockeys, horses or groundsmen - were able to stay warm.

But, is all-weather racing snow proof? Unlike sport on synthetic turf surfaces it would seem so, as long as horses and punters can get to the venue.

"At minus 11OC the surface is still raceable," comments Barney. "We snow blade to within 25cm of the surface and then power harrow the rest in, before using the Gallop-Master to prevent the surface 'balling' in the horses' feet. But, in January 2010, when we had cleared the course and the car parks, the road infrastructure around us was closed and the London Ambulance Service was stood down due to the weather, so we reluctantly had to cancel!" 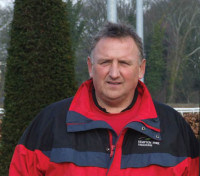 Head Groundsman, Steve Gudge, and his two deputies lead a team of ten groundstaff, who multi-task between the all-weather and turf courses, ensuring continuity of coverage for holidays etc. The well-motivated team are mainly qualified to, or working towards their advanced racecourse groundstaff course.

Steve has worked for Jockey Club Racecourses for thirty-one years, moving from Sandown Park some six years ago as deputy head groundsman. He explains the regime for the turf course: "At the end of April, we put the jumps courses 'to bed' with a reseed and application of fertiliser, and they are left alone until the middle of August when we start preparing for the national hunt season once again."

Mowing is down to Lloyds gangs plus a 3m Lastec front deck, used in conjunction with a blower.

"This arrangement was already in place when I became head groundsman, but it takes as much as a day and a half to cut the whole track. I have been very impressed with the productivity offered by the ride-on mowers at Sandown Park, and will consider that system when it is time

As Kempton Park is situated on gravel, an Imants Shockwave decompactor is an important part of the armoury, used to alleviate compaction whenever the turf course is felt to be a little 'tight', and routinely twice a year to encourage root growth.

Wetting agents are used to help retain moisture, and the fescue dominated turf reseeded with ryegrass to provide better footing.

"We use the services of an agronomist twice a year to help keep the turf in optimum condition and produce the consistent going that is required," explains Barney. The grounds team is backed up by a handful of casuals at an all-weather meeting, to rake crossings and tidy up. Treading and fence repairs require up to fourteen casuals at the turf meetings, with Steve and his deputies attending to emergency procedures in the usual way.

Kempton Park's site includes woodland, an ornamental lake and a large outfield area, which used to be bordered by the sprint turf course. This area is now rented to a local farmer for haymaking, and also supplies some of the packing materials for the national hunt fences.

Like most racecourses, Kempton Park plays host to a number of non-racing events, so year round presentation of the site is crucial. The Trilo vacuum also comes in handy for clearing up after regular antique and general markets, which take place on the car parks!

Working with the elements

Whilst the use of covers has become a lifeline to save winter meetings in icy conditions, they remain costly to deploy - in the region of £30,000. Therefore, predicting the weather accurately to decide whether or not to cover is as important before a national hunt meeting as it is to plan irrigation before an all-weather fixture. "We use a wide variety of weather forecasting services from Metcheck to a Met Office subscription, and have contractors Sports and Stadia Services on hand with covers, in addition to the sheets that we ourselves put down on take-offs and landings," explains Barney.

But, sometimes, the weather can give the Director of Racing a few heart-stopping moments. On January 14th Kempton Park was scheduled to run its prestigious Lanzarote Hurdle day, offering important pre-Cheltenham Festival trials for a number of fancied horses.

"The forecast for the 14th was never less than 1-2OC, and we made the decision not to cover as there was no indication that we needed to. Using frost covers for every fixture is a significant financial outlay, and can hit the profitability of specific days and affect overall prize money levels that we are able to offer. But, equally, it would have been costly to lose the meeting," he says.

"On the Friday evening, the temperature dropped below zero and, at 7.00am, was minus 5OC. But, by our final inspection at 11.00am, the temperature had risen back up to 1OC and, when the first race was run at 12.30, 4OC, so our decision was vindicated."


All weather racing - facts and figures

Lingfield was the first all weather course in the UK, and its original Fibresand track was replaced with Polytrack in 2001

Southwell came next, and is the only remaining UK track surfaced with Fibresand, although owners Arena Leisure are said to be considering US-based former trainer Michael Dickinson's Tapeta Footings surface, recently installed at the Meydan racecourse in Dubai.

In 1993, Wolverhampton installed its all-weather course, bringing floodlit racing to the UK for the first time.

In 2005, the first group race on the all-weather took place at Lingfield. The Surrey course now hosts the £100,000 Winter Derby and its Winter Derby Trial is a listed race.

In 2007, Musselburgh drew up plans for an all-weather track, improvements to the jumps course and new stable block, but was refused planning permission for the all-weather.

Great Leighs in Essex was granted planning permission in 2002, but it was six years before the track finally raced. In 2009, the Jockey Club refused to renew Great Leighs' licence and the administrators were called in. At the end of 2011, the course was purchased from West Register by MC Racetracks, who plan to redevelop it.

In 2010-11, all-weather tracks were praised for hosting extra meetings and keeping the industry's finances healthy during one of the longest winter freeze-ups for many years.