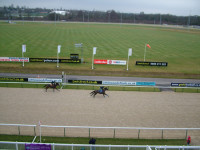 Wolverhampton is currently Britain's only floodlit horse race track and one of only three with complete all weather artificial surfaces. The venue is owned by Arena Leisure Plc, the UK's largest operator of horse racing venues with seven racecourses in their portfolio.

It has invested over £3 million pounds into new track facilities at Wolverhampton alone. After its 2nd generation All Weather Track was opened in October 2004, Wolverhampton was described by a leading jockey as one of the best in the world. 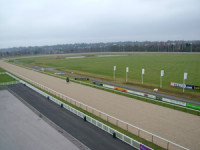 The regeneration of the course began in the early 1990's when approval was given to build housing and a hotel on parts of the site. This provided funding for the racecourse buildings, conference facilities and improvements to the track. The new course, complete with a Fibresand artificial track, was officially opened by the Queen in 1994.

Artificial racing tracks have been around since 1989. In the early days there were a number of sand ameliorated tracks Whilst innovative in their day they have been superceeded. They were inconsistent in depth, with considerable migration of material to the inside, following the camber. Kickback, where the surface is displaced by the horses feet flicking material up and backwards was greater as was the level of injury to horses.

The tracks required a high level of maintenance. The migration of material to the inner meant that re grading and depth testing was an on going operation. During dry weather irrigation was a major requirement, with the track being irrigated prior to racing using an automated pop up system. During cold weather, with moisture being an important element of the track, the battle to stop frost penetration was not easy.

Application of vacuum dried salt and a requirement to move the material at least three times an hour, to stop it freezing, was hard on the staff and the track. That worked until the temperature dropped below about minus 8 Celsius!

With the development of modern materials the early fibre sand systems are now being replaced with new second-generation products such as Polytrack. Polytrack is made from a blend of polypropylene fibres, recycled rubber and silica sand covered in a wax. The resulting product provides greater elasticity than other riding track materials, thus lessening the chance of bone fracture that can result from repeated exposure to high impact. 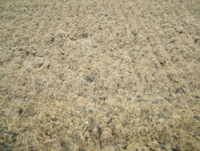 Wolverhampton replaced their old fibre sand system with the new 2nd generation Polytrack in 2004. At £100 per tonne it is significantly more expensive than the Fibre sand, however savings are made with reduced maintenance costs. Irrigation is no longer required and the material does not migrate in the way that the original surfaces did, thus greatly reducing the need to regrade the surface.


The new track is a one mile oval, tight left handed with a 180 yd. run in. The bends have a camber of 4 ½ degrees, with a transition into latterly flat straights.
The track is constructed of a fully grid piped drainage system overlaid with 40mm diameter coniferous limestone to a depth of 200 mm. On top is 100mm of 20mm diameter open textured porous tarmac and 175mm of the polytrack artificial surface material.

Wolverhampton's Clerk of the Course, Fergus Cameron and Estates Manager, Geoff Adcock, have been very pleased with the new surface's performance. They count amongst its many advantages:-

Geoff first came to Wolverhampton Racecourse in the capacity of Assistant Head Groundsman some nine years ago and, within 3 years, found himself promoted to Estates Manager responsible for both the grounds and buildings.

In theory, maintaining the polytrack surface is fairly straightforward. All it requires a programme of harrowing, cultivations and rolling to have it ready for racing.

Geoff and his team use a combination of specialist machines to maintain the track, namely a power harrow for deep cultivation to help take out any deep forming pans caused by compaction, a Vaderstad Rexius Carrier to remove intermediate compaction to a depth of 100mm, and the Gallop Master that prepares/finishes the surface for racing. 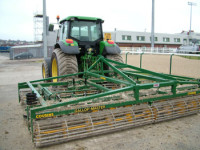 Once this has been completed the two 5m wide Gallop Masters are then used to re-level and firm the surface. Weather conditions and particularly the level of moisture will determine the number of times that the gallop Master will go over the surface. (Usually the drier the track the greater the number of runs).

The track condition can vary dependant on the weather. Generally, during the winter months, particularly after rain, it tends to become compacted. Heavy frost will necessitate the track being 'opened up' with the Power Harrow. This will allow the water repellant properties of the wax binder to remove all moisture, thus stopping the track from freezing. This same binder, in extreme hot and cold conditions, can solidify and become compacted. In each case either the Power Harrow or the Vaderstad Rexius Carrier is used to open up the surface.

The 15 metre wide track usually takes between 4 and 5 hours to fully prepare ready for racing. After every third race the Gallop Masters re-level the surface and remove any hoof prints, which is completed within fifteen minutes. During the course of an 8 race card, where a maximum of just over 100 horses will use the track. As with soil, track conditions will determine how quickly the track will compact. 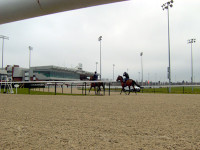 The track is prepared and reinstated to achieve the desired going for racing. Fergus Cameron, Clerk of the Course is keen to ensure that the condition of the surface will produce Standard going, which would equate to the quick side of good, in turf racing palance, where conditions allow.

A great value is placed in track and going consistency. Trainers are more likely to enter horses where the surface is reliable and safe. The form guide of the horses should in theory be more accurate as the structure of the surface is identical the whole way around the track. This in theory should make it easier to pick a winner!

The Jockey Club and Wolverhampton Racecourse are committed to providing a safe and consistent surface for racing. To ensure this happens a number of testing procedures and inspections are carried out throughout the year. This involves enlisting the help of Alex Vickers, from Turftrax and Cranfield University, who conducts a number of inspection and surveys to monitor the performance of the track.

Alex is interested in the physical make up of the track and usually measures a number of characteristics, bulk density, infiltration rates and particle size to see how the track materials are standing up to wear. Being a fairly new material it is important to ensure the polytrack continues to support the needs of the horses and jockeys in that it provides a stable, consistent and safe surface for racing.

All in all it seems that everybody is pleased with the new polytrack. An increase in the number of race days, the support of the Owners and Trainers rainers and more paying customers are all positive signs, and the reason why Wolverhampton has now become one of the busiest racecourses in the country. 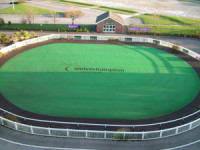