0 All you need to know about Photosynthesis 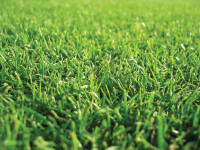 All you need to know about Photosynthesis

Probably the most important chemical reaction on earth is photosynthesis. It provides us with our food, oxygenates the air and reduces atmospheric carbon dioxide levels. For the turf manager, it provides the vital engine of turf growth (it also provided the petrol for the mowers).

Most people are familiar with the concept of plants absorbing light, but it might just be worth answering a few questions on the actual process of photosynthesis and turf growth.


Q. I've often heard it mentioned that photosynthesis has something to do with light and carbon dioxide being absorbed by plants - but what exactly goes on?

A. Yes, indeed light is absorbed by the plant and used, in combination with atmospheric carbon dioxide (CO2*) and water, to synthesise sugars. It also produces oxygen as part of the process. This is only a very brief summary however. It is, in fact, a complex process which has for the most part been uncovered by some extremely painstaking and intricate biochemical analysis. Some indication of the complexity is the fact that two photosynthetic systems are at work. These absorb light of two different wavelengths and depend on the transport of electrons derived from the splitting of water molecules; but we won't go too far into the biochemistry.

Q. So how does a grass leaf actually absorb light?

A. The answer is chlorophyll. This is a molecule which absorbs light at two wavelengths, both of which are at the red end of the visible spectrum (therefore because grass is absorbing red light, it appears green in colour).

The chlorophyll molecule is very similar in shape and properties to the haemoglobin molecule which transports oxygen in the bloodstream. It is organised within cells near the leaf blade surface in systems known as chloroplasts. However, the chloroplasts will only produce chlorophyll when light is present, so grass kept in total darkness is white in colour. 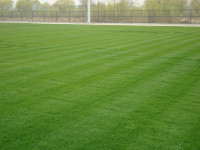 Under conditions of low light, such as in many modern stadia or under trees, the grass will compensate by manufacturing more chlorophyll, making the turf appear intensely green and healthy (which it is not).

Magnesium and nitrogen form part of the chlorophyll molecule and so if either of these is deficient then chlorophyll cannot be produced. For this reason nitrogen-deficient turf is very pale green or yellow.

Q. So how does carbon dioxide get from the atmosphere to the cells inside the leaf? Does it simply diffuse in?

A. Not quite. There are 'holes' on the leaf surface, known as 'stomata', which allow carbon dioxide, oxygen and water vapour in and out of the leaf. Normally, these stomata are open, but in dry weather conditions they close up in order to reduce the amount of water vapour being lost and so prevent leaf dehydration. However, an inevitable consequence of this is that the amount of carbon dioxide getting into the leaf is reduced, so photosynthetic activity declines and growth is restricted. This is one of the factors that reduces grass growth in dry conditions; it is not simply the lack of water itself.

Potassium has an important role to play in the control of stomatal opening and closing and a lack of potassium will lead to the stomata remaining open, even in dry conditions.

A. Water for photosynthesis is mainly derived from uptake through the roots. It is actually pulled up into the leaf by its diffusion into the atmosphere through the stomata.

Q. So, everything has been brought together. What happens next?

A. As mentioned above, the process of combining carbon dioxide and water together to form sugar (carbohydrate) is very complex. And remember, as a by-product, photosynthesis produces oxygen that is released out into the atmosphere. The initial sugar molecule produced is glucose. This then goes on to take part in many functions; as a provider of energy for the plant metabolism (as is also the case for animals); as a building block for more complex carbohydrates, such as cellulose and lignin, which provide the material for building the plant structure within the cell walls; and provides parts of the proteins and other molecules within the plant.

It may seem obvious, but it is worth remembering that no photosynthesis takes place in the roots. Therefore, the sugars produced in the leaves must be transported down to the roots via a series of tubes, known as phloem. Under low light conditions, the rate of photosynthesis is reduced and so sugar production is reduced. The leaves tend to hold on to any sugar that is produced and the amount transported to the roots is massively reduced. Therefore, the production of new root material is curtailed. This is the reason for the poor rooting density and depth found in many football stadia.

It should also be mentioned that regular mowing of grass causes sugars to be retained in the leaves in order to provide new growth.

Q. Is there anything that can be done to help photosynthesis in the turf?

A. In large part, the art of turf management is to minimise the factors that inhibit photosynthesis. The greatest restriction in turf photosynthesis is shade. To reduce this, dedicated lighting systems have been introduced to negate shade problems. However, it is worth noting that excessive amounts of light will actually hinder photosynthesis by inactivating the chlorophyll.

With regard to water, there is no doubt that a low water balance in the turf will decrease the rate of photosynthesis and consequent sugar production. Again, however, excessive soil water will be prohibitive to grass growth.

The one factor that could in theory have a significant effect on growth is carbon dioxide. The atmosphere normally contains 0.03% CO2. If this concentration were increased around the leaf surface, then growth would be substantially increased; as long as the other factors are present in adequate amounts.

There will also be a slight increase in photosynthesis rate when the ambient temperature of the turf system increases.

Q. How does fertiliser application interact with all this?

A. The most important nutrient for grass growth and health is nitrogen. If there is too little present then inadequate amounts of chlorophyll will be produced, thus reducing leaf formation. If too much nitrogen fertiliser is applied then, although adequate amounts of chlorophyll are formed, there is a massive increase in the rate of leaf cell division and new cell production. Therefore, a lot of cell wall material needs to be formed, and quickly. However, sugar production from photosynthesis cannot keep up in order to provide cellulose for the cell walls. So the cell walls formed are very thin. In addition, root development is poor. The turf is then prone to both wear damage and disease. Therefore, the right balance for nitrogen application is essential.

A lack of phosphorus will reduce the rate of cell division and so the actual concentration of chlorophyll within the cells builds up and causes the leaf to be intensely green in colour. This is often seen in cold spring conditions when low soil temperatures restrict phosphorus uptake. The turf may appear healthy, but growth is being curtailed due to a lack of cell division and so the turf cannot withstand wear and tear.

So, it is a complex business?

A. Yes, the details and factors affecting photosynthesis are complex. However, in essence, light energy is transformed into chemical energy in the form of sugars. And on that process all terrestrial life is dependent… you could say that we're all light.