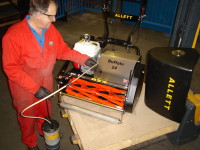 An Allett pedestrian cylinder mower has featured in the BBC's Top Gear motoring show as one of a number of uniquely-British products selected to accompany the three presenters on an unofficial trade mission to India.

In a 90-minute Top Gear Special broadcast on 28 December, Jeremy Clarkson, Richard Hammond and James May set out to "rescue" the British economy by attempting to boost the country's trade with India.

To help them in their quest, they took with them three pre-owned British-made cars (a BMC Mini, a Rolls Royce and a Jaguar) plus a selection of distinctively British goods including Marmite, digestive biscuits, Airfix models and . . . an Allett Buffalo 24 mower.

The Allett mower was chosen because, as James May explained to two elegant Indian ladies, a cylinder lawnmower is "a very pleasant thing to own, as an artefact and as an example of engineering with a fine engineering heritage . . ." He even admitted to owning one himself, despite having no lawn.

The immense pulling power of Top Gear was highlighted immediately after the broadcast when the Allett website recorded a 200 per cent jump in unique visits compared with a normal weekday evening, due in no small way to Top Gear's audience of 5 million viewers on the night.

The above figure will be dwarfed when the programme is sold and seen around the world over the coming months by a total audience estimated at 350 million in more than 100 different countries, further boosting Allett's profile and export prospects, despite the decidedly tongue-in-cheek nature of the show.

In typical Top Gear fashion, nothing went quite to plan and the Allett mower was shown careering out-of-control across a lawn before scything through a floral border and crashing

through a conservatory window. And, as the end credits rolled, the mower - less operator - was shown moving steadily across the screen heading for a 1,000ft Himalayan drop.

Having crated and transported the Buffalo 24 from Staffordshire to Heathrow airport for the flight out to India, Allett parent, Turfmech Machinery, was delighted to receive back the mower in one piece, albeit a little bit worse for wear.

Following a thorough inspection, a re-grind and service, the mower is now part of the Allett demonstration fleet with quite an interesting history already behind it.