0 Allett Mowers get into Training at Euro 2012 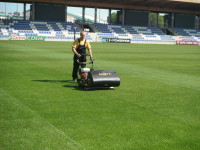 Three of the centres have been host to national teams while the fourth centre has been used for training by match officials appointed to preside over UEFA EURO 2012 games.

The Allett Buffalo 34 mowers were selected for the Polish training camps by STRI, a consultancy appointed by UEFA to provide advice on the playing surfaces at the EURO 2012 venues.

"The brief was to raise the standard of the training pitches to international level and prepare them so they played and looked exactly like the stadiums that were hosting EURO 2012 matches," explained Andy Cole, STRI's head of stadia services.

Having advised on and overseen the necessary pitch renovations at the selected training bases, they set about improving the machinery used to maintain the turf.

"We chose the Allett Buffalo with eight-bladed cylinders because we knew the mower was capable of producing a high quality finish, creating a practice playing surface equivalent to the pitches within the main stadiums," explained Mr Cole. "The groundstaff at all of the training camps were asked to produce an identical 18-band striped finish across their pitches, as in the main stadiums, resulting in competitive playing surfaces that looked and played the same." 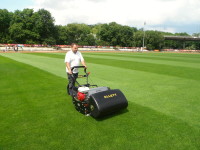 Mr Cole pointed out that Allett's input extended beyond simply providing precision-cut cylinder mowers for the Polish training camps. "We also asked the company to source and supply 15 pedestrian rotary mowers and to provide on-site training in the setting, maintenance and operation of these machines," he said.

Three weeks before the start of the tournament, Allett's sales director, Leigh Bowers, visited all five Polish training camps, including the match officials' base at the Agrykola sports centre in Warsaw, to instruct the various grounds managers and staff in the use and care of all their new mowers.

UEFA co-ordinator for the Wroclaw, Opalenica and Kolobrzeg base camps, Krzysztof Kopertyński, commented that the mower installations had gone smoothly, reflected by the experience at the Danish base camp at Kolobrzeg.

"Following a presentation by Mr Bowers, everyone involved in pitch maintenance had the opportunity to practise mowing and ask questions," he said. "I am happy to say that with the help of the Allett Buffalo mower, the pitch at Kolobrzeg is considered one of the best of all the team base camps at UEFA EURO 2012 in terms of quality and presentation."

Kolobrzeg stadium manager, Marek Rękas, added that the Buffalo is proving light and easy to operate, even over six hours of continuous mowing. "Setting is simple and the eight-bladed cylinder and its high speed of rotation produce a very high quality cut," he said. "We have had no problems whatsoever from what I consider to be very good equipment and are delighted to have been given the opportunity to use an Allett mower on our pitch."
● www.allett.co.uk