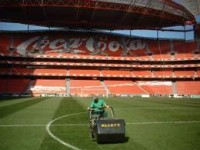 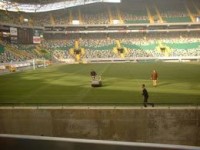 During the tournament, games will be played in eight cities at ten stadium venues before Lisbon's Luz stadium (the home of Benfica FC) stages the final on Sunday 4 July.

There are two stadiums in the capital city Lisbon being used as venues for the tournament, The Luz stadium as mentioned, and the José Alvalade stadium (the home of Sporting Lisbon). Ten of the tournament games will be hosted between these two venues, including two quarter final games, one semi final and of course the Euro 2004 final.

The preparation of the pitches for this tournament is of paramount importance, so the Groundsmen at both Lisbon stadiums use Allett mowers to not only ensure a top quality cut but also that immaculate finished presentation that will be vital for such a prestigious tournament.

Both Groundsmen are using Allett Regal mowers, the ultimate sports field mower. The Regal is a heavy duty cylinder mower with a large rear roller, perfect for producing the beautiful light and dark stripes which are seen on some of the world's most prestigious sports stadia. Power steering and hydrostatic drive come as standard features and the machine is available in two sizes, offering either 36" and 42" cuts.