According to chairman of greens, David Radbourne, it is these views and the superb condition of the greens cut by Allett Tournament mowers that make the course such an attractive venue for societies, corporate days and visiting golfers, the latter travelling from all over the world for great hospitality and a challenging round of golf.

"It is clear that the views played a major part in the decision to site the course on the top of a hill and the club continues to benefit from that decision," he commented. "However, there is a lot more to golf than great views and we face considerable competition from other courses in Herefordshire and neighbouring counties. For that reason, we strive to produce greens of the very highest standard for the benefit of our members and visitors alike. Once you've played a round at Kington, we are confident that you will want to do so again in the very near future."

Designed in 1925 by the noted golf course architect, Major C K Hutchinson, Kington Golf Club is described by head greenkeeper, Ian Gough, as a moorland-links style course with three par-5s, ten par-4s and five par-3 holes, all laid out on National Trust land. "The location and lack of any great depth of top soil make the course very free-draining, producing greens that are playable all-year-round," he pointed out. "Temporary greens are
a rarity."

Ian started at the club as an assistant greenkeeper in 1978. His assistants, Gareth Evans and Alan Crichton, joined the staff in 1989 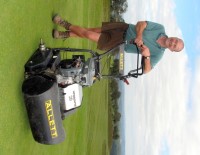 and 1995 respectively. Because of the high level of attention paid to the greens, pedestrian mowers have always been used at Kington, with the Allett Tournament being specified for the first time in 2002.

"I was becoming concerned at the ever-increasing complexity of what ought to be a simple machine to set-up and operate," explained Ian. "The Allett Tournament 20 impressed with its build quality, its ease of setting and its handling, particularly when turning at the end of the green. The price was also right so we have bought a further three 20in Tournaments since 2002 and have been very pleased with their performance, reliability
and quality of cut, enhanced by the fitting of grooming reels as standard."

From late May until early September, all 18 greens are cut seven days a week, reducing to three or four days a week in early spring and autumn depending on the level of grass growth. Height of cut ranges from a consistent 3.5mm throughout the main grass growth season to 5mm over the winter months when the greens are normally cut once or twice a week. The only time that the mowers are set to cut lower is for club or county competitions when 3mm is the minimum setting.

"We prefer not to cut too low to minimise the risk of turf stress on our free-draining soils," pointed out Ian. "To maintain optimum green speeds and turf condition, we use a combination of regular mowing and tightly controlled fertiliser inputs, applying water only when really necessary. At almost 250 cuts per metre, the Allett Tournament's cutting unit produces a very fine finish which, in combination with its grooming reel, delivers greens with excellent speeds and a true and consistent ball roll. In a nutshell, the mower does really well all that's asked of it and you can't get much better than that."