Lee Kristensen is a product manager at Ransomes Jacobsen. He manages the full range of Ransomes ride-on mowers and is responsible for the development of new products, including the recently launched MP series. In this article, Lee discusses the decline in cylinder municipal mowing, and why we shouldn't abandon the concept altogether. 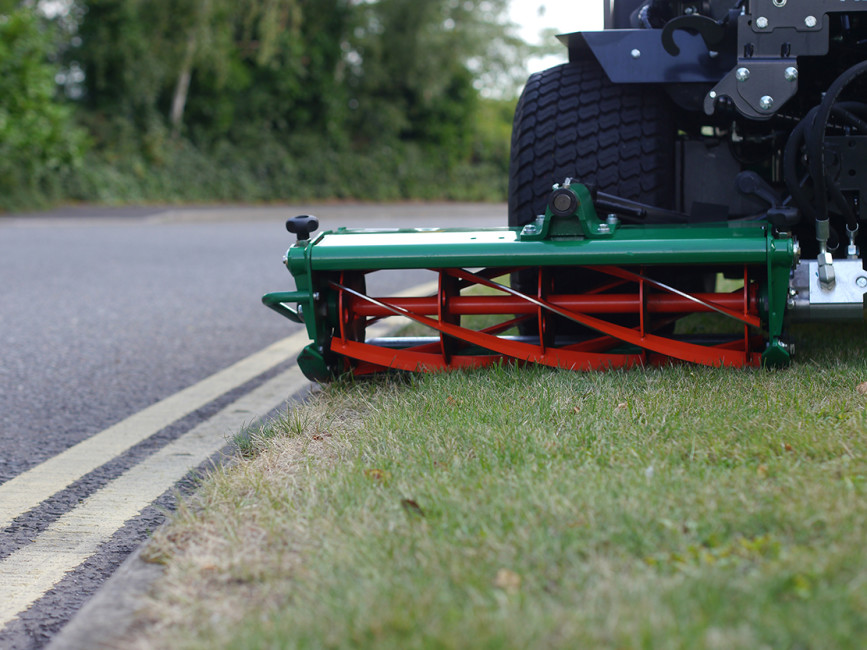 Cutting grass with cylinders has been the norm for 185 years and, in various forms, has remained a staple of grounds maintenance. Cylinder mowing has been adapted for use from millimetre precision on the top playing surfaces around the world, to mowing through dense lush growth on roadside verges.

At the top end of grounds maintenance, there is no doubt that cylinder cutting is the only choice, and manufacturers are continuously improving the craft with geometry tweaks, new materials, tighter tolerances and new attachment innovations to keep improving surfaces.

Cylinder mowing has also long been the leading practice in municipal grounds maintenance in the UK, making our green spaces enviable across the world. This reputation is already fading and, with the ever-increasing pressure on parks and grounds maintenance budgets, it is at risk of being a distant memory.

The development of rotary and flail mowers has met in the middle with the slow decline of expectations, forced by dropping resources, meaning there are strong arguments for these alternatives. These different methods of cutting appear attractive on the surface but, before the whirr of cylinders becomes alien around the streets of the UK, let's remember what we're missing.

The introduction of the triplex mini flail format pioneered by Ransomes, and continued development of technically progressive, comfortable, 1.5m out-front rotary and flail mowers has increased the range of viable methods of maintaining municipal turf. How do each compare to triplex cylinder mowing in its established form?

The focus of the discussion here will be on these smaller ride on units, but many of the arguments are still valid when comparing larger area, ride on cylinder mowers and trailed gangs, with their large rotary competitors.

Efficiency can be looked at as energy input (fuel and labour), and work output (grass cut). This category is where the old cylinder triplex really shows its strengths. Out-front rotary and flail mowers most commonly have a 1.5m width of cut, with the triplex cylinder and flail mowers at 2.1m. So, in a straight, side-by-side comparison, there is a clear winner. If you factor in the ability of a triplex to lift individual units around street furniture, further advantages become apparent. It is far more likely that operators can continue cutting in one direction without stopping, turning and coming back for the small areas missed. 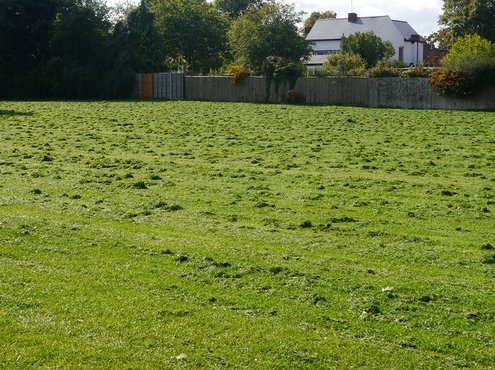 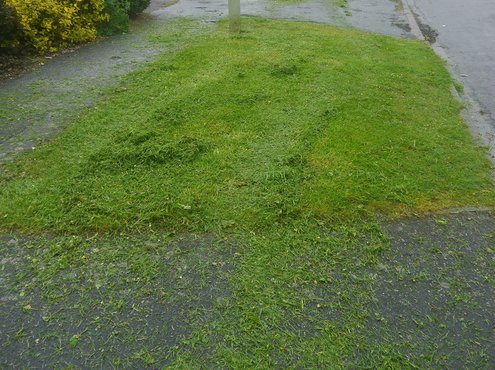 Now, going back to basic principles when considering fuel use: the scissoring action of cutting grass with cylinders takes the least force and hence less power and fuel. Impact cutting methods of rotaries, and especially flails, are very wasteful; moving lots of air, creating noise whilst tearing the leaf plants through brute force. Case-by-case, fuel usage per square metre of cut grass is going to vary on cutting cycles and machine conditions. As an example, running a 33hp machine constantly in conditions that heavily load the engine can use up to a litre an hour more fuel than in normal use. All of this considered, the efficiency arguments are strongly stacked with the triplex cylinders.

Capability: What can you cut?

Flails are generally regarded as having the widest range of cutting capability. Running a large number of high-quality blades at a high speed, can achieve a very uniform cut. The cutting motion does mean it needs some resistance in the sward to work against and attain this uniform level of finish. If conditions are too light or cutting height is too high, it can be inconsistent.

Flails also have the largest unit headspace for moving cut material, which is often the bottle neck when cutting long grass. Rotaries work very efficiently in the middle range, but often choke up in heavier conditions because they haven't got the space to get rid of the cut material. Side discharging rotaries help with this, but brings its own challenges. The manufacturers' recommendation on cylinder mowers is that they can't remove material that sits above the centre line of the cylinder spindle, as it sits in the grass. Any cylinder mower operator under pressure to complete their round will tell you they are capable of much more.

The actual capability is a function of many other characteristics. A slightly reduced mow speed, with a large diameter cylinder, and a low number of blades will still create the space to allow a large volume of grass in to be cut. Not aiming to mislead, an incorrect mow speed with the wrong cylinder will leave a very poor result in long grass conditions.

Another argument against cylinders is that they can struggle with tall spindly bent grasses and flower heads that are prevalent at certain times of the year. Some cylinder mowers have the option to adjust the cylinder speed, independently of the engine speed. This means you can slow the reels to better cope with these plants but keep your mowing speed up, staying productive. Again, it just comes down to an appreciation of the fundamentals. With this, a trained operator can get great performance from a cylinder in a wide range of conditions.

Operator training and skill: getting the most from the mower

As previously mentioned, operator education and skill can have a larger bearing on the productivity when working with cylinder mowers. Deftly lifting and lowering individual units of a triplex around objects requires some practice. Getting it wrong can lead to repair bills and downtime. Further knowledge is also required to keep the cylinders cutting effectively. 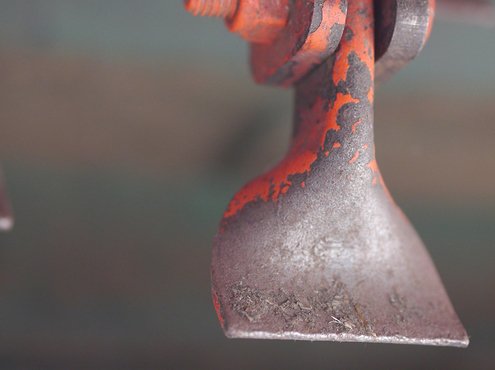 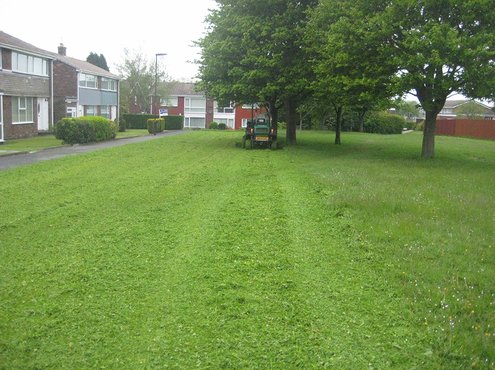 Municipal cylinders have had their adjustment mechanisms developed to be suitable for robust working environments, but an appreciation is still needed to keep it cutting effectively and wear of parts kept to a reasonable level. This additional attention inevitably takes more time. Out-front rotary and flail mowers have much less to consider, but still need to be handled with respect. Its physical size and toughness does mean that, in the wrong hands, it has the potential to increase damage to contoured ground, pavement edges and street furniture.

Despite being engineered for municipal applications; cylinder mowers have more parts that are vulnerable to damage, if misused or if they get tangled up with unseen manhole covers. A heavily damaged cutting cylinder will likely be hundreds of pounds to replace, compared to less than twenty for a rotary blade, and even less for flail blades. The complication of cylinder repair does also often require involving a workshop and the associated increased down time.

Rotary and flail blades can usually be replaced quickly by a trained operator following manufacturers' guidelines. However, if left unchecked, rotaries and flail mowers can run up large bills. Costs of replacing blade after blade because of a poorly set up mower can mount up. A triplex cylinder in considerate hands can have comparable repair costs to a rotary. Replacing a single set of bottom blades mid-season, plus a regrind at the end of season, would only come in around 15% more expensive than fitting a new set of rotary blades each month.

Whilst repair bills are bold and clear, many costs remain hidden. How much extra time is spent blowing away grass clippings spread from rotary mowers? Or running back over areas to break up clumps of grass? In addition to the potential fuel wasted by rotary and flails through inefficient cutting methods, all of the components up stream are under higher loads. Over time, all of this will increase the chances of a big repair bill and may reduce the life expectancy of the machine in the long run. As previously mentioned, cylinder mowers do take extra attention to operate. That extra attention may help to avoid accidents that would have happened if less notice was taken of the working environment.

The consistent, low impact, efficient cutting with cylinders will benefit the operator and machine components. All mower types leaving a manufacturer's production line will meet machine safety regulations for noise and vibration levels experienced by the operator.

A rotary or flail, with its impact cutting, means that it is more likely to experience wear and tear over time, which moves noise and vibration levels beyond the recommended limits. This increases with more heavy mechanically moving parts. Oftentimes, these machines can continue cutting grass adequately in this worn state, but long term damage may be caused unknowingly.

Bystander safety is always of key concern when working in public places, and thrown objects are one of the main risks. Although commercial rotary mowers are heavily tested to ensure any thrown objects are kept to a very low level, by their nature of cutting grass, risks are always higher.

As well as being the most efficient, the rotating cylinder scissoring action is the least stressful way of cutting grass, encouraging regrowth into tighter swards with less space for weeds and a greener overall appearance. How important is this though amongst all the other challenges faced by local municipalities?

The individual leaf condition of general municipal turf areas is under far less scrutiny than that of fine sports surfaces. There are also more factors affecting health that cannot be controlled in municipal spaces. There is even an argument that health doesn't matter at all and stressed turf will discourage growth between cuts. Rotary and flail mowers impact cut the grass, shredding the leaf tips, causing stress. Granted, you are not going to hear complaints on the poor microscopic appearance of leaf blades in local green spaces but then, if the pursuit of turf health is abandoned, you are very unlikely to hear that "Station Road is looking fantastic this year", and we could all do with a boosting compliment after a long dusty day on a mower.

Encouraging downward spiral of no attention

By no means are rotary and flail mowers ineffective ways of cutting grass. Some modern developments have made these machines very easy to use, especially for seasonal labour where operators may be inexperienced with using mowers. At the top of the range, the triplex Ransomes Meteor flail has almost done away with all of the disadvantages of rotaries and cylinders. However, you cannot get away from the fact that cutting with a cylinder is the most efficient way of cutting grass. Correctly selected mow and cylinder speeds, knife number and cylinder diameter can push the capabilities of the method. Correctly trained operators and respect for machines can keep operating costs low. Is that such a bad behaviour to encourage?

Blindly moving to rotary or flail mowing, and expecting lower bills, may be a dangerous downward spiral where less inspection is expected, so less occurs, and machine condition deteriorates faster than a machine that has been under a more watchful eye. The same pattern could be seen on the turf itself. Where expectations are lowered, so less care is given, dropping expectations again, continuing downward until we look back and wonder, what have we lost?