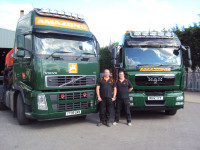 With an ever-increasing workload of new machinery deliveries plus all the field demonstrations and shows to cope with, the existing fleet of one artic lorry with crane backed up by a 4m light lorry and trailer was proving insufficient when it comes to offering the level of service demanded by both the dealer network and end customers alike. Plus with kit getting bigger, the light lorry is increasingly being able to be used for less and less pieces of machinery.

Using, of course, outside hauliers to move machinery about on our behalf is no problem; except that control is then lost of the operation and quality of service may suffer. So with this in mind, Amazone Ltd has added an additional 18 tonne lorry to their fleet. The rigid MAN TGA290 is fitted with a 7.5m long bed, plus sleeper cab so that it can then also now run on a long haul bringing the complete dealer network within range of both vehicles.

Ian Caulkett, logistics man-ager with Amazone Ltd goes on to explain the philosophy behind the decision to keep haulage in-house 'With the agricultural industry being so weather dependent, it means that although we move demo machines from farm to farm by haulier, often the end result is that they are not used as it is too wet. However, 50 miles up the road we could be drilling. With having now total control of the haulage operation, we can be more flexible on how we utilise this equipment during those peak workload months. Whereas the bigger trailed stuff can be moved on the low loader, the rigid 18 tonner can carry a couple of drill combinations so that the customer can choose between an AD-P Super or an AD-P Special once we get to farm'

The new lorry will be piloted by Steve Cargill. Steve, who has been with Amazone now for 5 years, has always provided a back-up driver service to the main artic as well as driving the light lorry. Duties also include assisting in the yard with machine preparation and spare parts dispatch. Steve goes on 'I am thoroughly looking forward to getting out and about further afield as well as getting involved with demonstration work alongside the driving. I have tried the sleeper cab now for comfort and, I have to say, I have already had some good nights sleep out there!'

Andy Barker, pictured below, remains very much at the helm of the Volvo. Andy recently cele-brated his tenth year at Amazone with a trip to the World Super Bikes 2012 as a small thank you for his loyal service.
The light lorry and trailer will continue to be used as and when necessary for delivering Amazone Groundcare equipment and spreaders. Andrew Hunt's appointment to the logistics department earlier this year was aimed at having a third driver where necessary.