0 Amber is the first winner of new TORO Educational Bursary 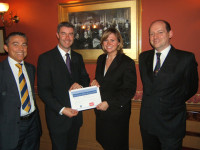 The first winner of a new competition sponsored by The Toro Company, and run by the English Region of the Club Managers Association of Europe (CMAE), has been announced.

Amber Rawson, of the Reform Club, London, won the Club Managers Diploma Bursary for 2007. Amber received a Toro educational bursary of £1000, which will fund her first year's fees to attend the CMAE's Management Development Programme to study for the Club Managers' Diploma. The programme, developed with support from Elmwood College, is the first step to becoming a Certified Club Manager. Amber, who is assistant house manager at the Reform Club, will also have a year's CMAE membership fees paid.

Richard Corbett, assistant to the golf operations manager at Woburn Golf Club, was runner-up and received a year's free membership of CMAE.

To win the award, entrants had to submit the best 400-word essay on why they believed the Club Managers' Diploma is very relevant to clubs. The competition was open to all supervisors and managers of the 500-plus clubs in the CMAE's English Region, which includes golf, country, tennis, city and athletics among others.