by Charmian Robinson
in Industry News
on 14 Sep 2012

0 American does a whistle stop tour with Campey 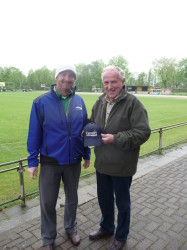 Washington-based Jerad Minnick came to visit Campey's Head Office in Macclesfield this summer - and got taken to see several countries in Europe . . . plus Real Madrid and Manchester United's stadiums.

Jerad is in charge of grounds maintenance and environmental management for the prestigious 22-field, 162-acre Maryland SoccerPlex in Germantown, Washington.

One time Director of Sports Field Operations for Sporting Kansas City, Jerad has worked with some of the best and brightest minds in sports field design, construction and renovation.

Campey Turf Care Systems played host when Jerad decided to take a closer look at how we do things in Europe and the UK.

Simon Gumbrill escorted Jerad to some of the major sporting venues in Europe and the UK to see how our combination of natural, desso and synthetic pitches compares with the American approach and the dominance of turf over seed.

At a demonstration day in Holland Jerad was introduced to Ko Rodenburg the inventor of the turf maintenance renovation equipment known as KORO. Ko was able to give him a real insight into the concept of fraise mowing.

"Travelling through five countries, I am sure there were times when Simon wanted to pull the car over or hit the eject button with all the questions I was asking," joked Jerad.

Simon says: "Not at all. It was an honour to accompany such an enthusiastic, knowledgeable man around Europe. We visited many places including Real Madrid, where Paul Burgess gave us a tour of the Real Madrid Training Ground."

Jerad says: "The observations and conversation created a wide range of new ideas for me."

Following his tour of Europe, it was back to the UK and a trip to Manchester United at historic Old Trafford. Jerad declared that the stadium exceeded his expectations. He thanked head groundsman Tony Sinclair for his professionalism.

"The challenges they face were extra motivating to me as we look at tackling the daily challenge of 22 pitches and all the events at SoccerPlex," says Jerad.

On returning home Jerad expressed his appreciation. "Thank you to Simon for the hospitality and the guidance - and to Richard Campey and the entire staff of Campey for the respect, the time, the ideas and the support.

"Absolutely a class act of an organization!"

Campey Turf Care Systems is one of Europe's largest independent grounds care machinery suppliers, and over the years Campeys have earned a reputation for offering practical advice and superb aftercare service.