by Peter Britton
in Conservation & Ecology
on 22 Aug 2016

0 American Mink - Tales of the riverbank

Non-native, invasive and capable of devastating the local fauna, the American mink has been blamed for decimating the UK water vole population. Regarded as the number one enemy on all waterways, it is believed that the only way to save 'Ratty' and many other indigenous species is to wipe out this aggressive and indiscriminate predator

If you have water on your golf course or around your facility, there is every possibility that a mink is not far away and, if it's the American variety, then devastation of the local wildlife will follow, such is the ferocity of this member of the Mustelid family.

Mustelids are regarded as some of the 'cutest' animals in the UK and include otters, pine martens, polecats, stoats, weasels ... and mink!

Whilst most go about their daily lives in a fairly harmonious manner, the non-native American mink (Neovison vison) is a non-selective predator capable of killing many of our native wildlife, ranging from fish, amphibians, rodents and birds. As well as killing our wildlife, American mink also threaten poultry and game birds and can cause carnage in stocked fishing waters. They are regarded as a non-native or invasive species.

Following escapes and releases from mink farms in the 1950s, American mink have had a devastating impact on our native fauna through predation of vulnerable species, especially water voles (Arvicola amphibius). The decline in water vole numbers can be directly attributed to predation by mink, which generally live and hunt near water, and can swim well. Female mink pose the greater threat as they are small enough to penetrate the water voles' last line of defence; their burrows. 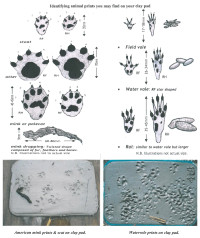 They are curious creatures and will often investigate tunnels, burrows and man-made objects, although there is evidence to show they avoid close proximity to humans.

Mink mark their territory with distinctive scats, in the same way that otters leave spraints. Scats and footprints at a site can often be a good way of establishing whether mink are present.

Female mink have a single litter of between three and six kits each year, typically between April and early May. Whilst nursing the young, the female will hunt intensively and vigorously over her home range - which can be up to two miles of waterways - and this has a devastating impact on water voles and nesting birds in the area. Therefore, it goes without saying that removal of female mink, before the end of April, will protect these species during their breeding season.

American mink are often mistaken for otters, but are much smaller with fluffier tails and pointed snouts. In size and appearance, they look much like a polecat, although the latter's distinctive white chin mark sets them apart, as does a similar and larger white chin mark on the slightly larger pine marten.

Inside this beautiful looking creature lurks an indiscriminate killer and, with no natural predators in the UK, their population has exploded, causing devastation as its range quickly spread.

Conservation bodies accept that mink control is an essential tool in water vole conservation. However, this control must be appropriately targeted, humane and form part of a wider strategy to include habitat management for the water vole. 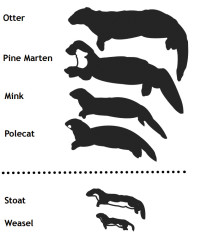 It is useful to know the biology and habits of mink so that you can take steps to control them effectively and humanely. Their lifecycle begins in winter when males start to look for females to mate with; mating has usually occurred by February/March.

By late spring, females are likely to have dependent young established in a chosen den.

During the summer, mink are found in family groups and can often be seen during the day. Once young mink have matured, they are usually forced out of the mother's den to find their own territory, usually around late September/October time.

As already highlighted, mink are very destructive to several of our native species, but none so high profile as the water vole. Although the water vole has evolved with a natural suite of predators (ranging from herons to otters), none of these have the same capabilities as American mink.

What makes mink different is the fact they can both swim and run extremely quickly, following the voles in and out of the water. Female and juvenile mink are also small enough to fit into the water vole's burrow, so the vole has no chance of escape. A female mink with young to feed is capable of killing all water voles found on a one mile stretch of riverbank in a single breeding season.

It is generally accepted that the only way to resolve the mink problem is to actively control mink using humane methods. The UK Water Vole Steering Group states that: "Without strategic mink control being carried out, in combination with habitat enhancement, we will lose the water vole from the vast majority of the British countryside in our working lifetime." It is also the law that if a non-native animal is caught in a trap, the trapper is legally obliged to dispatch the animal, as release would be a criminal offence. 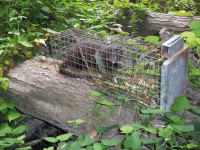 There are several methods for killing mink, but you should only ever use the most humane techniques available. Currently, the best method is to live capture the mink in a cage and then shoot it at point blank range at a specific point on the back of the head. A licensed and experienced trapper should only ever do this. The mink bodies are then either buried or burnt.

The cages are specifically designed to avoid any non-target species being caught accidentally. They have a small opening, which is only just big enough for a mink to pass through. If a non-target animal is caught, such as a juvenile otter, they must be released immediately, unharmed. It is the law that any live trap be checked at least once every twenty-four hours; but more regular checks are recommended by conservation groups.

If trapping over a wider area, mink rafts take advantage of the animal's inquisitive nature. As its name implies, the raft is floated on the water (tethered to a bank) and has a hinged tunnel on top of it. They can be used to both identify the presence of mink and to trap and kill.

In identification mode, a basket filled with florists oasis, with a layer of clay on top of it, is put under the tunnel. Mink will climb aboard the raft and walk through the tunnel out of curiosity, at the same time leaving footprints on the clay pad. By monitoring the rafts, it is possible to detect if a mink has recently passed through. Once their presence is confirmed, a cage is then placed in the tunnel to catch the mink, who will probably have revisited the raft several times in the interim period.

Other creatures will also use mink rafts, including otter, water vole and water birds such as coot and moorhen, so they can provide additional benefit by being able to monitor what other fauna is about.

In most instances, both cages and rafts are camouflaged to some degree to make them look as 'natural' as possible.

We recommend the use of purpose made mink cages as these will have the correct dimensions to allow most other species to escape. They are available at fairly low cost (around £20) from a variety of commercial outlets. Whilst a basic raft is very easy to make, the method of identification using oasis and clay can be fiddly, so commercially purchased models remain the best option, especially if monitoring other wildlife is of importance to your facility.

One thing is for sure, if you rid your watercourses of American mink, you will be doing the UK's native species a huge favour.

Complied by Peter Britton with thanks to the Gwent Wildlife Trust, the BBC and the Game and Wildlife Conservation Trust.