As part of Pitchcare's commitment to education and training we have secured a contribution from one of America's leading turfgrass agronomists, Professor Al Turgeon. Based at the Pennsylvania State University, he is responsible for many specific research interests that encompass turfgrass morphogenesis, edaphology and management systems. He has introduced and developed computer-based instructional learning resources for use in resident and distance educational programmes.

Al is well aware of the UK turfgrass industry, having been invited to talk at numerous conferences in the UK. He h as been a guest speaker at the NTF Conference in Southport for the last two years.

Al has again been invited to this year's NTF Conference in Southport in November. For further details of the conference please see link at the end of the article. 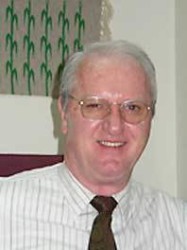 Excess organic matter usually occurs in the form of thatch: a layer of organic residues located immediately above the soil surface. The intermingling of its fibrous constituents with living roots and shoots provides some measure of stability and differentiates thatch from other loosely arranged organic residues in sports turf (14). Excessive accumulations of thatch are generally considered undesirable because of associated disease and insect problems, reduced tolerance to cold, heat, and drought stresses, and an array of other thatch-related problems, including scalping, puffiness, localized dry spots, and chlorosis from nutritional deficiencies. Modest accumulations, however, are thought to impart improved traffic tolerance and soil stability. This paper will explore the basis for both desirable and undesirable effects of thatch in sports fields, as well as methods for control.

A comparison of thatch-free and thatchy Kentucky bluegrass turfs shows the influence of thatch on the distribution of plant organs within the turf-soil profile. In the thatch-free turf (Figure 1), the crowns at the base of aerial shoots are situated at or slightly below the soil surface (15). Roots emerging from the lower portions of the crowns grow directly into the surrounding soil medium. Rhizomes developing from axillary buds along the sides of the crowns also grow directly into the soil and emerge to form daughter plants some distance from the mother shoot. Thus, the soil completely supports both root and lateral shoot growth.

In thatchy turf (Figure 2), emerging roots and rhizomes grow, at least initially, into the organic residues comprising the thatch. Where a substantial thatch accumulation exists, these organs may be almost entirely confined to the thatch layer, with very little growth across the thatch-soil interface.

Studies of Kentucky bluegrass turf comparing the soil underlying a pesticide-induced thatch with surface soil from adjacent thatch-free plots showed that the presence of thatch was associated with higher soil bulk densities (Figure 3). This was attributed to the absence of root and rhizome growth and the suppression of earthworms by the pesticides.

The more compacted soil from the thatchy turf also showed significant reductions in water infiltration, hydraulic conductivity, stored water at the 0- to 1-bar tension range, organic matter, and shrinkage on drying compared with the less-compacted soil from the thatch-free turf (10). Thus, the process of thatch formation may, in at least some instances, be associated with undesirable transformations of the physical properties of the underlying soil. This is presumably due to the lack of biogenic macropores generated by earthworms and root and rhizome growth.

Studies comparing thatch and silt-loam-soil media extracted from thatchy and thatch-free Kentucky bluegrass turfs, respectively, showed that the thatch had higher total porosity and macroporosity, and retained less water (9). This is inconsistent with common perceptions that thatch retains water for prolonged periods after rainfall or irrigation. This may be explained by differentiating between the water retained in the small pores within the fibrous materials comprising the thatch (intra-fiber pores) and the water retained in the larger pores between these materials (inter-fiber pores). Since much of the total porosity of thatch is macroporosity, many of the inter-fiber pores are large and would drain quickly, providing there was someplace for the water to go. If the underlying soil were highly compacted, however, it would only accept water very slowly, resulting in the formation of a temporary water table in the thatch layer (Figure 4).

Recall that temporary water tables occur where a coarser-textured medium (in this case thatch) is situated atop a finer-textured medium, such as a compacted soil (14). Thus, much of the water remaining in a thatch layer for prolonged periods following rainfall or irrigation reflects the formation of a temporary water table, not the moisture-retention properties of the thatch. Furthermore, when the thatch layer eventually dries due to infiltration of water into the underlying soil and evapotranspiration from the turf, turfgrasses growing in the thatch may experience moisture stress and show wilt symptoms despite the high moisture content of the underlying soil. This reflects the inability of water to move from the finer-textured soil to the coarser-textured thatch due the discontinuity of pore channels at the thatch-soil interface.

Other studies comparing thatch and silt loam soil media extracted from thatchy and thatch-free Kentucky bluegrass turfs, respectively, showed that the thatch had lost more nitrogen from leaching and volatilization (12, 13). Cation-exchange capacity (CEC) measurements have generated some confusion in attempts to characterize the nutrient-retention and other chemical properties of thatch. Ground thatch samples showed relative high CECs compared with selected silt loam soils; however, when the data were expressed on a volume basis as meq/100 cc (by multiplying the weight-based measurement expressed as meq/100 g by the bulk density in g/cc), the resulting CEC-BDs were much lower than those of the soils, reflecting the low bulk densities of the thatch (4). Thus, thatch compares unfavorably with soil as a turfgrass growth medium due, in part, to its low water- and nutrient-retention properties.

Other undesirable features of excessive thatch accumulation include increased toxicity and reduced efficacy from selected pesticides. For example, a prior application of paraquat for turf renovation dramatically reduced the stand from overseeded perennial ryegrass due to its residual toxicity within the thatch (8). When soil was incorporated into the thatch, however, the paraquat residue was quickly adsorbed onto clay particles and ryegrass germinated normally. Also, greater turfgrass injury was observed in thatchy Kentucky bluegrass turf than in thatch-free turf from selected preemergence herbicides, including benefin and oxadiazon, several months following application under heat- and drought-stress conditions (6). The degradation of DCPA and benefin was significantly faster in thatch than in soil, suggesting that these herbicides will persist for shorter periods due to the carbon-rich thatch medium, and that higher rates may be required to maintain concentrations at effective levels (7).

Close observations of thatch-free Kentucky bluegrass turf during the summer months revealed the presence of a thin thatch-like layer composed of above-ground adventitious (prop) roots, leaf-sheath residues, and other plant debris. The disappearance of this "transitory" thatch during the succeeding fall months coincided with the resumption of vigorous earthworm activity at the surface. The disappearance of thatch in this instance was associated with an increased level of earthworm activity, while its formation was associated with reduced levels. This suggests that the presence of thatch reflects an imbalance between processes associated with the production of turfgrass biomass and those associated with its decomposition. Earlier observations of the effect of selected pesticides in inducing thatch formation in otherwise thatch-free turf by inhibiting earthworm activity are consistent with this conclusion (16). In another series of investigations conducted at the same site, the authors concluded that the decomposition of organic residues may also involve microorganisms, as glucose utilization, amylase activity, and nitrogen bioconversion were all lower in soil underlying thatch than in soil from the thatch-free turfs (1).

Once formed, the composition of turfgrass thatch includes stem tissues and sclerified fibers of vascular strands, with leaf remnants largely confined to the surface layers (11). These organic residues may exhibit a higher state of decomposition in the lower layers near the soil surface. This is consistent with reports that the percent lignin increased with depth, as lignin is more resistant to decomposition than cellulose and some other structural carbohydrates (2). As thatch serves as a medium supporting turfgrass growth, living roots and lateral shoots are often observed within the thatch as well.

Methods for controlling thatch include any practice employed to either restore the balance between processes associated with the production of turfgrass biomass and those associated with its decomposition or to compensate for an imbalance between these processes. The former would certainly include avoiding the use of thatch-inducing pesticides, while the latter might involve various cultivation and topdressing operations.

Cultivation includes vertical mowing and coring (hollow-tine cultivation, or HTC). Vertical mowing involves the use of vertically oriented knives mounted on a rapidly rotating vertical shaft. Depending on the penetration depth of the knives, different objectives can be met (Figure 5).

This can substantially change the physical and chemical properties of the thatch and influence its suitability as a turfgrass growth medium. For example, soil incorporation increases the bulk density (BD) and the cation-exchange capacity (expressed on a volume basis as CEC-BD) of the thatch (5). As a consequence, the transformed thatch, or thatch-like derivative, is less susceptible to compression under traffic and its water- and nutrient-retention capacities are increased.

An alternate method for incorporating soil into thatch is topdressing. Its primary advantage is that a more suitable soil than that available beneath the turf can be selected to support turfgrass growth. As with the incorporation of indigenous soil, the purpose of topdressing has been twofold: first, to improve moisture and nutrient retention while taking advantage of the resiliency and compaction resistance imparted by the organic constituents of thatch and, second, to accelerate the biodegradation of these constituents.

For intensively cultured turfs, topdressing practices have slowly moved toward lighter, more frequent applications. This, in turn, has encouraged the selection of essentially pure sand media because of the ease with which sand can be distributed at light rates. But the efficacy of sand in promoting the biodegradation of organic residues differs from that of clay-containing soils. Measurements of sand-topdressed creeping bentgrass turf showed that dilution of organic residues is at least as important as accelerated biodegradation in controlling the problems associated with excessive thatch accumulation (3). The frequency of topdressing did not influence the amount of organic matter detected; however, it did influence the textural uniformity of the profile, with frequent topdressing resulting in greater uniformity.

In a frequent sand topdressing program, topdressing intensity can dramatically influence the composition of the resulting medium supporting turfgrass growth. For comparison, three intensities will be discussed: minimum, optimum, and excessive (Figure 7). At a minimum intensity, the amount of sand applied is just sufficient to fill in the pores between organic strands so that there is no significant increase in volume. This results in an organic-rich medium in which aeration may be somewhat limited. At an optimum intensity, the amount of sand applied is sufficient to substantially expand the volume of the medium and to provide a proper balance between aeration, resiliency, and moisture and nutrient retention. Where the sand topdressing intensity is excessive, the organic-matter content of the resulting medium is so dilute that resiliency and moisture and nutrient retention approach those of pure sand.

Thatch is composed, in part, of organic residues generated by the turfgrass community under conditions that result in an imbalance between processes associated with the production of turfgrass biomass and those associated with its decomposition. When excessive accumulations of thatch are allowed to develop, they are associated with an array of problems that can seriously threaten turf quality. The most appropriate measures for controlling thatch currently involve the incorporation of soil or sand into the thatch to improve its physical and chemical properties, promote its biodegradation, and/or dilute the organic material to a level optimum for sustaining healthy turfgrass growth and satisfactory turf quality.