I had been invited by The Toro Company, and sponsored by Lely UK, to visit the Toro Headquarters in Minneapolis. It was one of those all expenses paid trips (sigh, bit of a pain really), but these things have to be done, I think you'll all agree. 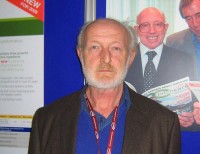 Simon Gale from Lely UK was at Heathrow to meet me and we were soon joined by the two others in the party, Roy Mephram from Wentworth Golf Club and George Hunt from Woburn Golf Club.

After a ten hour flight we arrived in Minneapolis with a bump and the roar of reverse thrust. We then trundled around Minneapolis airport looking for a parking space (you'd think they would have that sorted, wouldn't you?), parked up and went though the paperwork circus that is arriving in America.

A short taxi ride took us to our hotel where we went for a drinks and hors d'oeuvres reception in the bar put on by The Toro Company. Here we met various representatives of Toro, some of whom would be our hosts for the week. The other members of our party had all arrived and we introduced ourselves, Rick Raison from Australia, Bert Dohmen and Marcel Hendrickx from Holland, and Peter Kavanagh, Patrick Lachapelle, Erle Jackson and Malcolm Starkey who were all from Canada.

On Tuesday, our first day, we took a short ride in the hotel shuttle bus to The Toro Headquarters in Bloomington where we spent the day being shown around the various departments. 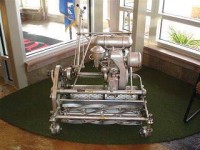 Toro Motor Company was founded in 1914. The company began as an engine supplier to the Bull Tractor Company and, in 1920, changed its name to Toro Manufacturing Company who, by now, were manufacturing farm equipment. Toro created their first golf course mower in 1921.

Now, in 2008, Toro are considered the leaders in golf course maintenance equipment, boasting some 1,400 patents, both current and expired.
Our principal organiser for the week was Ms Karine Watne and, after signing a confidentiality agreement, we started the tour.

The tightly packed day flew by as we went from one department to another along huge corridors you could land a light aircraft in.

One department dealt with aesthetics, styling and ergonomics. Using a variety of materials including clay (couldn't spell plasterscene) and papier-mache to make full-scale models of machines seemed a little excessive, but simply confirmed the attention to detail we would become accustomed to during the next few days.

We met Mike Hoffman, Toro's Chief Executive Officer, who gave us time from his busy schedule to extend a warm welcome. We also had time with some "boffins" engaged on alternative fuel projects and fuel saving ideas. 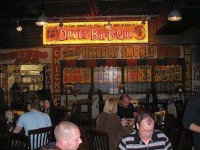 Mr. Dana Lonn, Head Engineer of The Centre for Advanced Turf Technology, and his colleagues, Jack and Jesse, made a good team; they had much to say about many ideas that were being examined. I got the impression they were a law unto themselves, but free thinking was encouraged to get the most out of the creative mind. In my opinion this is to be applauded for its investment in the future.

Dana's talk in the afternoon was inspired and inspiring. He was able to draw on his vast experience to use simple parallels to explain complex concepts that made them both easy to understand and very entertaining.

Dinner that evening was to be at Famous Dave's Bar-b-Que grill, a short bus ride from the hotel to Minneapolis city centre. Our hosts ordered us a delicious mixed grill served on inverted dustbin lids (a nice touch, and I was assured they were clean) with a selection of catfish, ribs, cajun chicken, fried onion rings, potato wedges and cornbread.

Being my first visit to the US I had to try everything, including the local beers!
We returned to the hotel and I took it upon myself (together with others who shall remain nameless) to ensure the barman didn't knock off early.

On Wednesday the day began with a short bus ride to Toro's parts manufacturing facility in Shakopee, Minnesota. Here they produce nearly all the steel component parts for the company's product range. 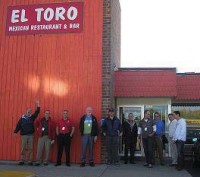 We saw reels being made from scratch with the use of robotic welders. Interestingly, the steel used for the cutting blades comes from the United Kingdom. We were shown laser-cutting equipment in action, which was very impressive, and massive stamping presses, the largest having a 600 tonne capability. It was sunk into the floor to a depth of ten feet on waterproofed foundations because it was below the local water table!

There were auditing rooms throughout the plant for assessing parts' accuracy and quality; we were given demonstrations of the laser measuring equipment, which was very quick and precise.

We left Shakopee to go for lunch at a Mexican restaurant named, but what else, El Toro. The shuttle bus driver assured me that El Toro is Spanish for lawn mower, (of course I believed him).

Following lunch we returned to the hotel for a round table discussion, moderated by Mr. Steve Keating, Toro's Selling Skills Manager, about our thoughts and experiences with Toro parts and services. The back of the room was rowed with different Toro personnel from parts marketing to hydraulic engineers. The time went quickly and I hope it was of some value to our hosts. 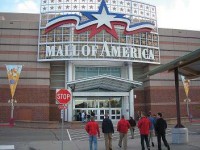 Wednesday evening was free time for us to visit the Mall of America, a shopping complex that is so large it has become a national tourist attraction. The building contains over 520 shops and has an amusement park in its centre. One of those interesting facts to emerge from the visit is, if you spent ten minutes in each shop it would take eighty-six hours to look at them all, mind boggling!

On Thursday we visited the main commercial product assembly plant in the town of Tomah, Wisconsin, a three-hour coach drive! We took the scenic route along the Mississippi river. With vivid autumn colours on one side of the road, and the wide span of the Mississippi on the other, it made for a very pleasant drive and enriched the stay in America, for me anyway. We stopped twice to stretch our legs and take photos, it was a lovely day, bright, sunny and warm, I managed to get a picture of one of the Canadians sporting a pig tail that must have been a metre long! I should think he is a complete stranger to the hairdressers and not mindful at all of health and safety in the workplace.

On the product assembly floor my initial impression was how confined the work areas were, but I later found out that this was for productivity purposes; reducing the distance a worker has to walk for a component reduces manufacturing time.

The assembly lines were busy but no one appeared rushed. Instead they looked unflustered and unhurried, but very quick nonetheless. The component parts are delivered in quantity to a central point (referred to as the supermarket) for each assembly line and taken to each assembly worker when they are needed, on a "just in time" basis to prevent cluttering up the limited work space. 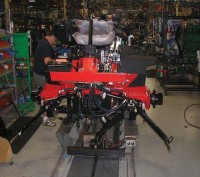 The Tomah plant employs approximately 660 people with a mix of 50/50 male and female. From what I saw all the models produced here are hand built and with a great deal of pride.

Without exception, everyone we spoke to made time for us and seemed to derive much job satisfaction. A couple of our group remarked what a great machine the GM 1600 was, and the person on the assembly line was obviously so pleased that we thought that of a machine they were instrumental in producing. Taking pride in their job appeared to be part of the work ethic in the factory and I was most impressed.

Our final dinner together was at an Italian restaurant, named I Nonni, where we enjoyed excellent food, wine and good company. After dinner we parted company with some of our Toro hosts. The remainder saw us back to the hotel for a 'few drinks' and farewells. The barman did his duty and stayed to the bitter end, but we weren't finished yet and had to pay a visit to a nearby bar to continue our critical research into local brews.

Friday was departure day for us all but we managed to breakfast together. The four Canadians left early, Bert and Marcel, our Dutch friends, left a little while after, leaving Roy Mephram, George Hunt and myself waiting to head for the UK, and Rick Raison to catch his flight for LA and then homeward bound for Australia.

The four of us decided to do a last minute bit of shopping at The Mall of America and duly caught the shuttle bus, which dropped us off outside. We browsed around looking for the perfect gifts for the folks back home, 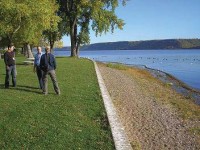 We returned to the hotel and made sure Rick left the country, or at least got on the bus before we did some more "last minute" shopping at a local cash 'n' carry.

There must have been reserved parking at Heathrow because the endless trundling around we experienced at Minneapolis was much shorter and we were soon clearing customs, well and truly on our way home now.

It was a wonderful experience all in all and I thoroughly enjoyed it from beginning to end. Those nine others were a real pleasure to meet. Australian Rick Raison was already an "email acquaintance" before we met but, after these few days, we parted as firm friends.

I wish him and all the other visitors much luck for the future. Gentlemen, it was a real pleasure to have met you.

At this point it only remains for me to thank The Toro Company for their generosity, hospitality and flawless organisation of the visit, Lely UK for their nomination and sponsorship and The Celtic Manor Resort for allowing me to attend.