Trials underway on the golf course at Ashdown Park Hotel and Country Club in East Sussex are giving very encouraging results on the benefits of a new product from PlantWorks UK Ltd, a small company involved with mycorrhizal product formulation.

Despite the success of mycorrhizal products in retail horticulture and professional landscaping, a certain amount of scepticism still exists in the turfcare industry about how well they really work, and what role they can play in turf management.

The problem is largely one of perception. Many biological products have appeared on the market over the years, and disappeared just as rapidly when they failed to deliver on their marketing claims. The situation in amenity turf is very similar to the one faced by the commercial horticulture industry some years ago, as Dr Mark Whittaker, a biopesticide expert from the commercial crop protection industry, explains:

"Biological products have been around for years, for everything from controlling pests and diseases to enhancing plant growth. Whilst some work extraordinarily well, there are also a great many that work very poorly, and these are the ones that muddy the waters for more efficacious products.

Although a similar situation exists in amenity turf, among the greenkeepers we have spoken to there does seem to be a willingness to try new products."
Clearly, the most important aspect of any product containing mycorrhizal fungi is the quality of the inoculum, not least because it is the most expensive component. At the core of rootgrow is the same blend of isolates found in the company's retail and professional products, all of which are extracted from UK soils.

"Whilst mycorrhizal fungi show fairly limited specificity in terms of their host plant, they show far more adaptation to the soils in which they grow" said PlantWorks' MD, Robert Patten. "Just as isolates from sandy soils don't generally perform well in clay soils, isolates taken from outside the UK often don't perform as well here as the indigenous strains." 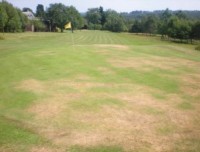 It is precisely this approach to using only UK-origin isolates that led to the company's retail product being formally endorsed as 'best horticultural practice' by the Royal Horticultural Society last year after lengthy evaluation at Wisley.

Simon Taylor is the company's Sales Manager: "Taking our RHS-endorsed isolate mix as the core, we added carefully selected components to aid water retention, soil structure and nutrient management - not only for the benefit of the grass, but also for the microbial communities that are a vital consideration when developing an holistic approach to managing amenity turf."

Among these additives is zeolite, a mineral with a honeycomb structure that slows the rate at which nutrients are leached from the soil. It also aids water retention, and increases aeroporosity by resisting soil compaction.

Kevin Sweet, the Estate Manager at Ashdown Park Hotel and Country Club was keen to see for himself how the product would perform on their golf course. Built in around 1992, it consists of 'push-up' greens in which the indigenous substrate is pushed together to create a playing surface. Beneath the turf is a layer of accumulated topdressing material approximately 25mm deep, under which is silt subsoil. For the trial, four greens were selected on the basis of their relative proximity and similarity in terms of size, south-facing aspect and previous management. Each was arbitrarily assigned to a treatment group as follows:

Shortly before the trial started, core samples were taken at random from each green to measure the natural background level of mycorrhizal activity.

On 3rd June 2009 greens 1, 2 and 7 were hollow tined to a depth of three inches using a SISIS Supaturfman. Core debris was removed and discarded. Half of the sand topdressing was applied by hand over the greens, and luted into the turf using a metal dragmat.

On greens 2 and 7, rootgrow turf was then applied using a hand-propelled cyclone fertiliser spreader calibrated to 35g/m2, with additional passes made to achieve the desired application rate as closely as possible. Finally, the remaining sand was applied to the three greens and luted into the tine holes using the metal dragmat. The greens were playable immediately after treatment.

After 26 days a further four core samples were taken from each green and assessments made of root and shoot fresh weight, and percentage mycorrhizal colonisation.

Prior to treatment, all greens were broadly similar in appearance. These images were taken 26 days after treatment.

The green treated with rootgrow turf at the 100g/m2 dose had a superior visual appearance and a significantly higher root fresh weight per gram of soil than the other treatments - a result with particular relevance to the stability and durability of playing surfaces. However, the full effect of the mycorrhizal fungi won't be seen for a few weeks yet, as Simon explains:

"It takes a little while for the fungi to fully colonise the rootzone, after which we should start to see denser top growth. From extensive trials in Eastern Europe we also anticipate benefits in terms of reduced fertiliser and irrigation requirements as the mycorrhiza takes over the sourcing of water and nutrients for the turf, essentially reducing the amount of management intervention required."

For greens and tees receiving their first treatment, or for basal dressing prior to laying new turf, an application of 100g per square metre is recommended. Subsequent applications should be made on an annual basis at half this rate, although badly damaged areas will benefit from repeat treatment at the higher dose.

Further trials are currently underway in the Midlands and North of England as PlantWorks sets out to demonstrate the benefits of UK isolates for UK conditions. Michael Weekes, Group Course Manager with Bromley Mytime Leisure, is trialling the product on the USPGA-spec greens at Bromley Golf Centre, a full report from which will be available later in the year.

With the commercial launch planned for Autumn 2009, there is a limited quantity of rootgrow™ turf available for trials work over the next two months. Any greenkeeper wanting more information, or wanting to set up a trial, should contact Simon Taylor at PlantWorks on 01795 411 530.