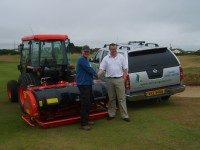 According to Course Manager, Paul Lappin at Kirkistown Castle Golf club, his new Terra Spike GXi8 HD not only has the best speed and efficiency of any aerator but saved his committee from buying two separate machines and upgrading a tractor!

Situated in County Down just 30 miles south of Belfast, Kirkistown is Ireland's most easterly 18 hole golf course. Enjoying a unique peninsula setting it receives less rainfall so remains open all year long when other clubs around are forced to close.

Kirkistown has been the proud owner of Wiedenmann's latest revolutionary aerator since August. "We've had it over our entire course several times already, says Paul Lappin. "In truth, I haven't seen anything to touch the GXi8 let alone beat it.

"It's a wee bit faster and wider at 1.8 m than others we considered. With us being on a sandy site without many rocks or stones it's just as effective on the fairways as the greens so I can choose to use it anywhere. Had we gone for something at 1.5m wide to suit our greens then I would have needed another aerator at 2.0m for the fairways and then had to upgrade our perfectly good Kubota L4200 tractor. As it is, the GXi8 HD is an ideal fit and now the tractor is really paying its way, too.

"There are just so many advantages to owning our own machine. When our committee realised it was working out at the same price as getting the contractors in regularly over a period of time we didn't look back!

"Initially we spiked all the greens with 8mm tines. Then we stepped up to 12mm tines doing all the fairways, greens, tees and aprons. It's been pretty much in use continuously. Take November, we probably didn't miss a day.

"I can deploy my team of four so much better. Everyone's been operating it. Already with the Wiedenmann regularly going over the tops of the fairways I've had a chance to get insecticide to penetrate further into the ground -something that previously wouldn't have happened. This summer I'm hoping the combination of the deep aeration and then the following up with insecticide spraying on a wet day will mean fewer daddy long legs and leather jackets on the fringes of the course. Also in the summer the areas that had a tendency to dry out faster will stay green longer.

"However what pleases me most - and our members- is how smooth it leaves the greens. In seasons gone by with a contractor doing the work the members always had a bit of a moan for two weeks after the greens had been aerated. Now they are silenced and don't bat an eyelid. They also are surprised how early in the season we've been able to start and everyone can see how rapidly the course is benefiting."

Kyle Irwin from dealer Turfcare based at Lurgan, Co Armagh said: "When you combine quality grass seed and fertilisers with a machine like the Wiedenmann Terra Spike GXi8 HD you will always get good results. Our philosophy at Turfcare is to help clients maximise the health of their turf and working with Wiedenmann is a natural progression. The course at Kirkistown Castle is a great example of how by skilfully nurturing the natural and ecological resources you can achieve an excellent year round playing surface."