0 An interview with Walter Goodyear - Part one

There are many thrills that have come my way since starting this blog and the one that keeps on giving is the contact with club legends. I've interviewed a good few of them now and each has been a pleasure. 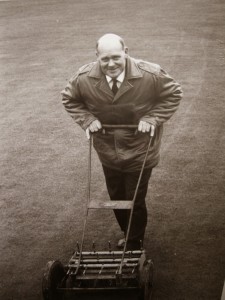 None more so than my interview with one such legend who never bowled nor hit a ball for the county, but was a major part of the cricketing landscape at first-class level for almost half a century.

Walter Goodyear was the groundsman's groundsman, a man who had forgotten more about his art than most ever know. From 1932, when he started work at Queens Park, Chesterfield, to 1982, when he retired, he prepared wickets specifically, as you will read in the coming weeks, for our rich array of seam bowlers.

They weren't so much Derbyshire wickets as "Walter wickets". He knew what the club wanted and prepared them impeccably. Anyone winning the toss would fancy a bowl, the extra grass offering early help to any seam bowler worthy of the name and willing to bend his back. For much of his time we did very well, because the conveyor belt of quick bowling talent kept producing the goods...Copson, the Popes, Gladwin, Jackson, Rhodes, Jackson again, Ward, Hendrick...the list went on. Yet you could get runs on them too, because when the 'green' went off it, the wickets were simply good for cricket.

Walter Goodyear is 97 now but still as sharp as a tack. Old age doesn't come alone, as the saying goes, but he is philosophical about his lot, despite losing both his wife and son to accidents that perhaps could and should have been prevented. He is refreshingly honest and funny - wonderful company, in short. I asked for an hour of his time, thought it might take two and ended up with him for four. I could have stayed much longer, just listening to his tales and he even offered to share his lunch with me.

In the preparation for this piece I managed to speak to Steve Birks, now groundsman at Trent Bridge and one of the most respected in the game. He got a start as a groundsman under Walter Goodyear, spending twelve months with him at the County Ground from 1981 to 1982.

"He was the biggest single influence on my career, without a doubt" he said. "He was quite a fearsome character and a lot of people were frankly terrified of him. But he took me under his wing and I remember he would tell me to fetch my flask and we'd go out on the square and have our lunch, or a tea break. If you listened to him, you couldn't help but learn, because he knew it all."

Steve joined the ground staff from a Youth Training Scheme, making such an impression as to being the one from that scheme that Walter still remembers with a great deal of fondness.