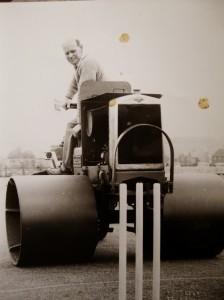 The 1930s were a golden era for Derbyshire cricket. Were you a fan at that time?

I was never a cricket fan! It was just a job and when you're out of work you do anything to get money coming in. That's what I was happy to do, until the day that I retired.

Was there much difference in pitch and ground preparation between Derby and Chesterfield?

I had a hand roller at Chesterfield and a motor roller at Derby! That one at Chesterfield was 15cwt. Two of us had to push it, though I did it alone sometimes when there was no one else about. It used to pull your guts out, but it certainly kept you fit!

At Derby there was much more than cricket. There was Derby Amateurs football club, five hockey teams, National Westminster Bank with different teams - it was a constant battle to keep the ground in a decent condition. All the teams wanted to play as late as they could to prolong their season and I was forever replacing divots and trying to keep the ground half decent for the cricketers, who needed the best surface, of course.

It wasn't an easy life, that's for sure.

How did the move to Derby in 1938, when you too over as head groundsman come about?

Harry Fletcher, the groundsman at Derby, died and Stan Worthington, our top all-rounder, lodged with him. On Stan's recommendation I was offered the job outright, no interview or anything. I only saw it as a short-term thing though. I should have gone back home after the war and I regret not doing that, as I've said.

It was a racecourse then as well. Mr Smedley was the race course manager. He gave me decent money for working on it, but he also gave me a paddock ticket for the course, as a thank you for what I had done. Now, I wasn't interested in horse racing at all, but a friend of mine was commissionaire at the Regal Cinema at Chesterfield and he moved to do the same job at the one in Derby. I told him to give the paddock ticket to the cinema manager, so he could come to the racing whenever he wanted. In return, I got complimentary tickets for the cinema whenever I wanted!

The cinema was in East Street, halfway up on the left hand side. The Derby Building Society is there now. I also got to go to the theatre, and to the Hippodrome for free too. Old Walter did all right out of that and I had to wheel and deal throughout my days...

Were there many differences between the two squares and the way they played?

Chesterfield was much easier to manage. The thatch was better - you had to rake cricket grounds to get the turf to the texture you wanted - and of course the surrounds were much nicer. The drainage at Derby was dreadful and the water went down a seven-inch pipe that stopped at the pavilion. Whenever it rained, it used to back up and flood, but there was never any money to sort it.

A few years ago they wanted to excavate the square at Derby and they dug down around ten inches to do so. Once they had it dug out, they went for lunch and came back an hour later. It was full of water! There's a very high water table there and that was always an issue until they spent some money on the drainage.

I could take you to Derby now and show you where there's a well on the ground. It dates from the time before the Grandstand Hotel, when there was a farmhouse there. The well belonged to the farm. It is covered with large slabs of concrete, so nobody's likely to fall down it in a hurry...

Peakfan note: On a visit to the ground this past summer, I asked current groundsman Neil Godrich about this. He showed me where the well is, not too far inside the boundary in front of the Gateway Centre. If we're ever a fielder short, that's the first place to look...