It's always good to hear about British glory at the Olympics, but away from the official medal tables, other Brits have been achieving top honours in their discipline. 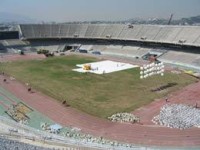 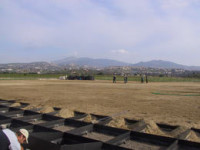 The lake was to take up the entire pitch surface with a 25m hole in the centre of the lake, there were also tunnels under the pitch for performers to gain access and no body seemed to have an idea of how to overcome the transportation of a last minute pitch. We had to appoint a Greek agent for our negotiation with the ministry of sport for Greece and the International Olympic Committee. This process took six months of deliberation before we were awarded a signed contract. We had wanted to and suggested that the field was constructed during the autumn of 2003 by seed and Bermuda sprig so that the pitch could become established. However, we did not get the contract until March 2004. We were contracted to supply the product as well as the design framework and consultancy to oversee the process.

We specified what grass we preferred to use, Bermuda 419 grass, but there were no Bermuda 419 grass fields in Greece. Greece is in a transitional zone so with the hot summers they were able to use Bermuda grass and then overseed for the winter with Rye grasses. (A perfect scenario.). However just looking at their climatic records, we could not believe that there were little or no Bermuda fields being cultivated. The turf farms mostly had tall Fescues and Rye. With temperatures around 40 degrees during the summer months, even the tall Fescue fields were struggling. Bermuda grass would be perfect to use? 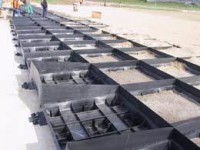 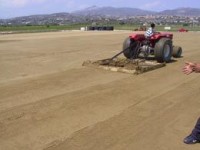 We had decided that we needed two guys out there, for the duration of the contract. We appointed Matthew Frost, who had been working in Hong Kong for the last ten years, initially at the National Stadium and more recently at the prestigious Hong Kong Football club. He was keen to move on, and was able to make himself available for this job. He was an ideal candidate having worked with modules and enjoying good experience of Bermuda grass management. We also employed a lad from Michigan State University, Matt Anderson, who joined Matthew in Greece from the 1st April this year.

When we were awarded the contract in March, we had to get 7128 ITM modules to Greece, by the end of April-No mean feat! There were penalty clauses in the contract amounting to quite a few thousand Euros if we didn't meet the deadline. The pitch build started on the 20th April at the construction site near the airport and finished (Turfed) on the 15th May.

We were manufacturing the modules and delivering them in batches, 396 modules per lorry load, 18 loads in total, we also needed to manufacture sleeves that sat around the modules to retain rootzone material, (every other module had a sleeve). Despite the short time scales we were able to meet the deadlines and the construction went smoothly. 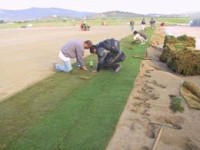 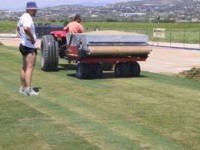 The turf company (Hellasod) did have some Bermuda turf but it was not fantastic. We tried to source some better material, but this meant importing turf from abroad, which wasn't ideal. In the end we decided to go with the local Bermuda turf, but needed to organise the washing off of the material that the grass was grown in. For the system to work in the time scale it had to be washed. We had to teach Hellasod new techniques about washing turf. There were no turf washing machines in Greece. So the head of their company decided to make their own bespoke washing machine. It proved to be a well-engineered machine.

Because the Olympic track was going to be at a certain level, built on a concrete base inside the stadium, the modules from the concrete to the top of the turf had to be 350mm deep. This meant that there was a depth of 250 mm of rootzone on top of the gravel. Once the field was built outside, we had to implement a vigorous top-dressing programme and maintenance programme to get the turf up to scratch. Although the turf had been washed it had come in like sprigs. Time was short and the main contractor wanted us to do a dry run, to see how long it would take to move the modules into the stadium. (The main move would only allow us a 60-hour period to get these modules moved into place within the track area, due to all the other works going on at the stadium.) 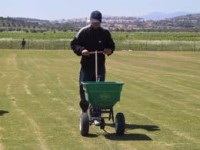 ; the Bermuda turf was only 4 weeks old on the modules. The young roots were still developing and filling the modules, we moved about a 1000 modules against the clock to test the time. Then moved them back again a couple of days later. We carried on with the regular maintenance programme and also did some nutrition testing from that time until the main move on August 15th. Our two lads were doing most of the maintenance themselves, with some labour provided by the Greek turf company. We had to organise the machinery, fertilisers and chemicals, it ended up being a very good job.

The Bermuda grass took to the modules very well. Every module had been numbered during the original construction. This meant that every module when taken from the construction site into the stadium could be placed back into the identical position.

The construction site was near the Airport, the site itself made on a crushed stone base (which was not what we had asked for. We had asked for a solid tarmac or concrete base.) So at the end of the day we had to make do with the stone base. In fact the Greeks did a great job on the site with the stone surface, it was laser levelled and compacted with rollers, there was full irrigation supplied, security fencing and some security personnel there 24 hours every day.

The two months growing in the turf were not easy, the weather was much cooler than expected, and the Bermuda grass took time to establish, but by the middle of July, temperatures picked up and the Bermuda grass started to flourish. The pallets were covered for a week at the beginning with germination sheets, however once the temperature rose, the difference in colour and vigour was unbelievable. 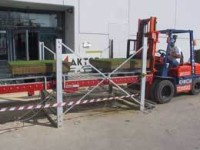 August, Jack Morton's company had to be out of the stadium by the 15th August and we started the move with the first module being laid and placed in the centre of the Olympic stadium at 2pm on the 15thAugust. Every truckload could take 22 modules, so we ended up with 265 truck movements, each movement a 20-minute drive from the construction site to the stadium. We employed 12 flat bed trucks, all the trucks (as well as the modules) numbered. Because of the amount of other people/vehicles involved at the Olympics, the trucks were not allowed into the stadium itself, so a conveyor belt was made available to move the modules from the trucks into the stadium. The conveyor belt was 110 metres long and stretched from outside, through a service tunnel, over the track into the middle.

With the first module arriving at 2pm on Sunday we continued to work around the clock, with the last module in place on Wednesday at 2am, 60 hours later. There were two forklifts lifting modules from the trucks onto the conveyer belt and two fork lifts lifting them off the conveyor inside the track. Then there were two more forklift trucks doing the final placing. At the construction site we had another four forklift trucks working, moving and loading the modules on to the numbered trucks. Two cutting crews at the construction site used templates (the size of the module) to cut around the modules (cutting down two sides with a 4 inch blade.) They started in the middle working out either side.

The irrigation at the stadium had been sunk into the concrete base. As the relevant modules were put in place we had flexible hoses that were fed up into the module and Rain Bird sprinkler heads were fitted. The move went well, although it slowed slightly towards the end as we ran out of working space. The fitting of the irrigation, cutting some modules to fit the oval shape of the stadium base, fitting timing and clock systems for judging, moving the conveyor also all took time to put in place. 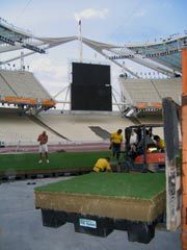 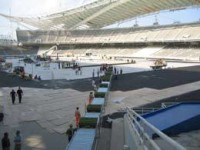 The Greeks had never come across systems like this before. So they did very well to trust our experience, but I think if we had not been there, they may not have achieved the same outcome. Elsewhere, the Greeks have done a good job, finally delivering all the core facilities and transport links on time. These facilities are first class, the tram systems, train links, roads links, they are all superb.

The whole experience has been good for us, and Matthew Frost hopes to continue maintaining the grass after the Olympics are finished. In September we hope to be involved in the movement of modules for the opening ceremony of the Para Olympics.

Pictures below show pitch before stadium move, grass level shot in the stadium and the pitch being prepared for the track and field events.

Pictures below show Olympic stadium on the opening day of the track and field events, the Greentech ITM team on the modular surface at the airport and a group of Greentech ITM and Hellasod lads in the early hours of the morning following completion of the move into the stadium.