0 An update on the work at Robin Hood Golf Club 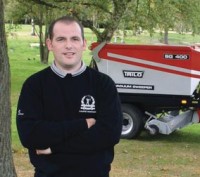 Ten months on from writing my last article, and two years on from completing the drainage work on sixteen of the greens at Robin Hood, I can report they have improved beyond recognition.

I talked about the drainage work carried out to the greens in detail in my last article in February; this is just an update on what has happened since then.

A good topdressing budget was obviously essential, and this was taken into consideration when making a decision on what route we would take to achieve good surfaces at the club when I started back in March 2009. 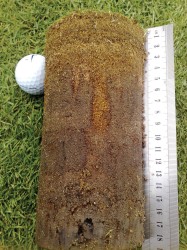 Over my first three years, taking us into March 2012, we will have put down over 1,100 tonnes of sand on the putting surfaces alone to assist us in making the greens playable throughout the year. This equates to a cost of £31,000 for the dressing alone, not to mention the labour, equipment and diesel being used to put out and drag in the material.

The drainage work was additional to this, costing between £2,000 and £4,500 depending on size, spacing and distance to nearest positive outlet.

300mm main carry drains were installed across the course the previous summer, to keep distances to positive outlets as short as possible.

The other essential element was support from the membership and continuous communication explaining how the work was, and still is, progressing. This has been through weekly/monthly reports, evening presentations and being approachable to answer questions out on the course. Without the support and patience from the membership, none of this work would have been possible.

Since the work has been completed, membership has increased dramatically, with over ninety new members, to a point that we achieved full membership during the summer; something the club hasn't had for several years. This success has very much been down to the club driving forward with its course improvements; in particularly the greens renovation programme.

Gone are the days, during my first summer, when I had to wait eleven days for three of the greens to be dry enough to mow again! However, there is still some heavy work to do over the next twelve months to improve how they perform.

I will be working on the thatch layer that has moved down the profile because of the amount of topdressings. The thatch layer has diluted hugely over the past thirty-two months, due to the twelve hollow corings, at depths of between three and nine inches, and a pass with the Graden sand injection machine.

However, on close inspection and with the help of organic matter tests carried out by the STRI, higher than recommended levels of organic matter are still present below the layer of straight sand. We have built up to depths of approximately 60-80mm, so hollow coring will continue at this depth and below throughout the next twelve months.

Now we have greens that remain dry and have a relatively healthy profile, we have begun an overseeding programme to try and establish a bent grass population in, what is, a predominantly poa putting surface. We have initially overseeded with a couple of varieties of velvet bent, however, this programme will constantly be reviewed as and when new cultivars come onto the market.

Last year, the 16th green was rebuilt to USGA Specification and two greens were extended. Three holes were also redesigned.

This winter, the work on the greens is continuing, with the extension of the 18th green and the installation of new drains over the existing green at 2 metre spacings. This was the final green to be drained on the course and wasn't done during the initial workings two years ago, as the previous team had carried out work to it prior to my arrival which, at the time, was felt to be satisfactory

. However, since the improvement of the other greens, the 18th has fallen behind in performance.

We will also be redesigning the rest of the 18th hole, along with building a new first tee and renovating various bunkers around the course. We have also installed fairway irrigation to three of the fairways and, over the past twelve months, have taken our team of staff from seven to nine by taking on two apprentices with funding assistance from Solihull Council. They will complete there NVQ level 2 with Myserscough College.

With the drainage work on the greens complete, Robin Hood Golf Club laid the foundations for the success that has followed and now, with the increase in staffing levels and the amount of improvement work to all surfaces that is continuing, it looks like they will have a very successful future and continue to move from strength to strength.