0 Anatomy of a golf course - Greens 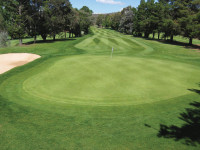 The golf green is, arguably, the most important part of the golf course. The green is where the majority of shots within a typical round is aimed at or played upon. The golf green has to cope with balls being pitched onto it from full shots played from up to 250 yards away, whilst also being smooth enough for a ball to roll predictably across its surface. In this article Andy Watson, of Andy Watson Golf Design, will look at what constitutes a green; how it is placed; its size and shape; and technical advancements that have improved the green surface over time

Greens were developed on links land in Scotland. They would have originally been clearings or flatter dunes within the dunescape, and these would have been selected for their prominent position and well grazed turf. Through further formalisation, and the application of mowers, greens have become well defined by cut height. They are now distinct, mainly circular features, with many challenges built into their surfaces.

When the game of golf expanded to England, it migrated to heath and moor land areas where the soil was sandy, similar to that of the links of Scotland. When the

game expanded to the United States, with the Scottish colonies, similar soil wasn't always readily available, and there are some examples of greens consisting of squares of oiled sand, including Pinehurst No. 2 which contained these until 1935 (see image). Donald Ross was involved in the evolution of the courses at Pinehurst, and he transformed the oiled sand into challenging turf greens by incorporating some of the more dramatic shapes of the Scottish greens where he learned his profession.

When deciding the green position within a new golf course design, a number of factors should be considered. The green itself should be a realistic and tempting target for the golfer; that is, at least part of the green should be visible from the landing area of the approach. If possible, greens should be placed in as natural a position as possible, thus plateaus and ridges become perfect for green positions. 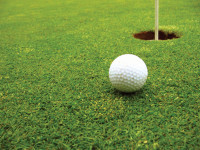 On occasions, greens may attractively sit within a valley, but this is dependent on outfall for drainage being included within the design. Promontories are also attractive and lend themselves to bunker and other hazard placements.

When a green is being positioned, the potential positioning of hazards is also taken into account. Rolls and hollows can be created to add chipping and putting interest around the majority of green surfaces with minimal movement and, with a little more earth shaping, bunkers can also be created. The competent architect will spot the positions that these features can be created and work them into the overlying strategy of the hole, as discussed in the previous article on bunkers.

Greens which were closed in on all sides were once a popular style for architects to mimic. However, it was found to increase the potential for waterlogging, and poor quality surfaces as a result. In addition, closed in greens often result in the bottom of the flag being hidden, which does not sit favourably in a modern game which relies on the level of accuracy obtained using Global Positioning Systems (GPS) and distance sights. Therefore, although closed in greens are possible to maintain, they are rarely used, and a green will be kept far better if there is satisfactory run off around at least two sides of a putting surface.

Green sizes vary from course to course. An average green should be between 300m2 and 400m2. However, green sizes can be much larger, sometimes upwards of 600m2.

Reasons for increased size include the change in levels and the amount of lobes incorporated into the design and, therefore, the available pin positions required. The size also has to incorporate the movement and turning circle of a ride on mower, if that is what is used on the course, to ensure turf is not ripped with the tyres. This also ensures that the target is not too narrow, allowing the majority of the surface to remain pinnable.

Pinnable areas on the green are portions of the surface that are relatively flat and at least three metres away from the green edge.

When considering pinnable areas, a golf course architect is looking to strike a balance between the interest created in the lobes of the putting surface, whilst maintaining as high a percentage of pinnable locations as possible.

Alister MacKenzie was a true master of pushing these boundaries, as some of his more recognisable works attest. His greens at Augusta are considered, to this day, some of the most difficult tour challenges the professional golfer has to face. MacKenzie stood out within the golden age of design for creating incredibly challenging green contours.

Sitwell Park's par 3 includes some fantastically frightening height changes and more than five distinct lobes. Unfortunately, this green is no longer in existence, but many more exist of similar style. It should be noted that this is different to the type of green commonly referred to as a MacKenzie green.

The MacKenzie green is a two tiered green with a simple straight tier drop. However, it is rare that MacKenzie actually used 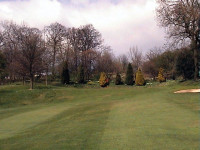 this in his designs and is, therefore, somewhat of a fallacy that his name is associated it.

Green size should reflect the difficulty of the approach shot. Longer approach shots should generally be played to a larger green surface as if played to a smaller surface, or smaller surface entrance, the difficulty of the hole is dramatically increased. An approach shot should entice rather than completely block the approach, and the golfer should then be rewarded for successfully negotiating the hazards by finding his ball on a green perhaps larger than it looked on the approach. This effect can be created by careful placement of bunkers and other similar hazards. Generally, the shorter the approach shot is, the smaller the green can be although, as discussed above, the size shouldn't ever be completely predictable.

Greens can form many shapes, but they are largely circular in form. The simple circle or oval means that, once on the green, any pin should be accessible by putting over the green surface only. More complex shapes include amoeba forms resembling kidneys and hearts, and, sometimes, squarer shapes with all sorts of kinks in the perimeter, and these can be interesting and appear attractive, especially if the shapes are following the shape of the contours.

These shapes may, however, compromise successful design if a pin placement is in one corner of the green and the player's ball is in another, with a curve of fringe in between. The player will have to play through the fringe in order to access the pin, and this should be avoided in the interests of the greenkeeper, as players may be 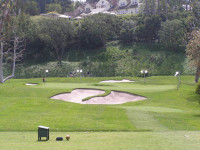 tempted to use a wedge to access the flag, potentially harming the green surface (see figure 1). A donut shaped green was created by George C. Thomas Jr. at Riviera Country Club in California. A bunker is placed in the centre of a fairly severely sloping green of a mid length par 3, highlighting the importance of accuracy for the approaching golfer.

The shape of the green can either reflect or oppose the desired approach shot to be played in order to influence the strategy of the golfer playing the hole. Approach shots over a greater distance may reflect the shape of the shot with a longer section to catch balls being fired in from a long distance.

Shorter holes can sometimes afford green shapes that are a lot wider than they are long, creating a line of defence that only accurate golfers can play successfully into. The whole surface does not, however, need to be dictated by the approach length, rather a successful shot from a length should be rewarded by at least part of the green by allowing the successful approaching golfer to putt their next shot.

The construction of a green has altered drastically since the game was formalised and brought to the world from Scotland over one hundred years ago. Before irrigation systems existed, the fashion of green construction was to create a saucer shape of clay beneath a surface of a similar shape, in order to catch water and effectively store it below the surface to feed the turf.

Since irrigation systems have been modified for use on golf courses, the shape has swapped from concave to convex, the modern theory being that water that is shed effectively gives more control to the greenkeeper who can feed the turf with a regulated amount of water, when they see fit.

This level of regulation allows for shorter cuts to be applied to green surfaces which, again, affect the way a green can be designed. Maintenance issues can occur on modern surfaces with steep slopes, as grass will struggle to grow at such a short length creating bare and scorched spots or damp and moss infestation depending on aspect and air flow. These tend to be avoided in new courses at the design stage but, if already in existence, can be altered in a number of ways.

They can be physically ironed out or the angle altered to either give more or less sun to the slope, or the factors causing the problem can be removed. For example, a north facing slope may be moss ridden or soggy, but removing surrounding trees and shrubs, improving the air and light flow through the area, can effectively reduce the opportunity for dew to sit, or water to gather.

The composition of a modern green is regulated by the United States Golf Association, which has founded a standard method of installation. This method is found to be the most effective at draining water from the surface, whilst maintaining a satisfactory sward of turf if maintained correctly on the majority of sites.

The base layer of the USGA specification is a depth of gravel with a herringbone pattern of drains laid beneath it. This has a layer of rootzone (soil and sand mixture) above it, onto which the green standard turf is laid, or seed sown. A blinding layer of sand can be placed between the two main layers if it is believed that the rootzone may contaminate the soil (eventually clogging up the drainage system).

This article has discussed all the elements that Andy Watson considers when designing or redesigning a green into a golf hole. This is part three of four in Andy Watson's series on the Anatomy of a Golf Course. Previous articles focused on the teeing ground and bunkers. The next issue, and final article in the series, will look at fairways and how they tie together all the elements mentioned in the first three articles. Contact Andy Watson Golf Design for help on your next project: www.andywatsongolfdesign.co.uk