The latest renovations at Northampton Saints ground have fine-tuned an ecological loop, centred on a natural lake thought to have been on site since the Middle Ages. 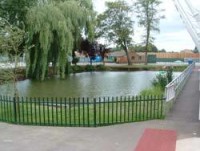 "Geographically it's the bathplug of the area," says Grounds Manager David Powell, former Saints captain and ex British Lions player. "Records show that there was once a monastery on this site, and it was probably used as a carp lake for the monks."

Situated at the back of the South stand, the 70 by 30 metre water source, collects filtered run-off from the ground's roofs, and is used as a reservoir for irrigation purposes.

"Five years ago we took advice from the Environment Agency" continues David, "and spent £3,000 on species of fish, such as roach, bream and carp, which, along with the right plants keep the water clean as a whistle. Sometimes, in summer, the players even swim in it."

Following the re-development of Northampton's stadium into a 13,500 capacity ground, work began in June to relay the pitch. Pugh-Lewis, the Chesterfield based sports field constructors won the contract, bringing in Premier Pitches for the finishing works.

"Once the existing surface had been removed and we'd laser graded, we installed a comprehensive drainage system with laterals seven metres apart, and sand slits at 750mm centres," says James Pugh Lewis. "As the water level in the lake is often higher than the drains we also installed an automatic pumped outfall, to insure that the pitch drains efficiently in all weather conditions."

Following seeding, the final parts of the ecological pattern were provided by the new irrigation system, (which includes perimeter pop-up and manual infield sprinklers) fed by a submersible pump floating one metre below the surface of the lake.

"We're always being encouraged to conserve our water," says David Powell, "and this seemed the obvious way to do it. In wet weather the pitch feeds the lake and when it's dry the lake provides water for the pitch."

For further information on the construction and drainage services of J. Pugh-Lewis, contact the company on Tel: 01773 872362