by Malcolm Gardner
in Industry News
on 15 Jan 2007

0 And it's not all plane sailing

After 24 years working in the private school sector (20 years at St Edmund's School Canterbury and 4 years at St George's College Weybridge), I decided I needed a fresh challenge working in a different environment. So this year I left my post of Head Groundsman at St. George's and moved across the City to take up the post of Grounds Manager at the British Airways Concorde Club sports grounds near Heathrow.

I also wanted to get back to a more hands-on role. This new post gives me the perfect opportunity to bring some much-needed organisation and an extra pair of hands to the fore.

I duly arrived in the midst of the summer sports season (end of June) to be confronted with a very busy sports ground that boasts a membership of 21,000 (though not all actively participating in sport) and provides a wide rage of sport facilities for its members that predominantly use the club in the evenings and weekends.

During the summer a number of additional sports pitches are marked out on the outfields; these include, softball and a couple of 5-a-side pitches.

I have inherited a staff of three, who have between them several years of experience working at the club, my assistant, Ben Able, has been at the BA Concorde club for five years, Paul Knape two years and our trainee groundsman, Matthew Parry, has been here twelve months.

For the outfield areas we elected to keep the height of the grass at the same height (25mm), we cut our football pitches during the winter, in expectation of a long hot summer ahead.

This worked well for us with our grass visibly better able to cope with the heat at the height of the heatwave without overstretching ourselves with watering. We were also fortunate that the cricket section were very understanding of our need to cut a little higher too.

At the beginning of the drought period in June I arranged for the hire of a Charterhouse seed drill to come in at beginning of August. As the summer wore on, I began to think I had made a bad choice in my timing. However, on the Friday before the seeder was due in on the Monday, the heavens opened and the spell of hot weather broke. We got the seed in and over sowed pretty much most of the field.

Helped by the inclement weather that followed, the seed was up in four days and people were starting to look at me as though I were a rain god. The fortuitous timing helped us provide an excellent presentation for our President's XI cricket match in mid August.

I spent the rest of the summer working on, and getting to know, the cricket squares, as this is an area of groundsmanship that I have always loved. Soon after starting on the preparations I found that the squares were extremely dry and nothing like those I have been used to in the past.

Taking a look at a soil profile of the squares I soon discovered what I was inheriting. Both squares were extremely dry down most of the profile, with the top 25mm only showing signs of having adequate moisture. Under the top 25mm the rest was very dry, very crumbly and lacking suitable consolidation. We spent a lot of time watering during the evenings and nights in order to get moisture back into the profile. The main part of the square was cut to 15mm with final pitch preparation seeing the height of cut reduced to 4mm or even down to 3mm.

The bowls green was cut consistently throughout the summer at a height of around 4.5 to 5.5mm. The green is tucked away in the corner of the site and regularly suffers from poor air movement which, during the right conditions, increases the incidence of disease attacks; we are currently suffering some fusarium and have recently sprayed with Heritage to control the disease,
Other than those early inputs I have spent the remainder of my time evaluating existing working practices and the culture of the club and how it ticks. The pitches seem to stand up to the wear and tear of a heavy fixture list. Records show that there has not been a lost fixture for well over six years at the club.

I am keen to introduce new regimes when the time is right; as with most grounds they all have there own way of working. It is my role to examine these existing practices and see how we can improve our efficiencies and services to our members. I have found the staff to be very accommodating and they seem to have the relevant experience and potential skills to take this ground to a new level. We can achieve this by implementing and improving the frequency of operations along with choosing the right products and machinery to be more efficient.

We have also just completed a programme of scarifying four of our football pitches, reseeding, fertilising and topdressing them for which we used Rigby Taylors R14 seed mix and RT's Organic 8/0/6 winter granular fertilizer. We applied topdressing in two parts with both 25 tonnes of 60/40 and 25 tonnes of an organic green spread to each pitch. I have to say that, at the time of writing, I am impressed with the early results.

One of the major differences between this facility and the schools I worked at previously is the different operating times. Schools are in use every day and we had clearly defined term times for set sports. At the BA Club we are influenced by the bookings and the traditional winter and summer sports calendar, with most of the sports provision mainly being held during weekends and evenings. Therefore, we tend to have a clear period during the days to get things done.

The members get to use the facilities free, however, we do operate a pay and play policy on some of our facilities such as the rugby and football pitches, charging between £75-£140 for the hire of a pitch per game.

As for the amount of fixtures played in any one season we often see well over 280 football games played along with 40 games on the rugby pitch. And cricket averaging 130 games per season.

As for improvements it is early days yet. There is plenty of potential to improve the facilities here at the BA Club in the coming years.

I would like to address the irrigation system and see if we could install a system for watering the tennis courts and, at the same time, put some significant watering outlets within the outfield to help water the cricket outfield and pitches.

Within the grounds team there is some very good experience that can be drawn on to carry out minor machinery repairs, with most of the major repairs being carried out by an outside workshop.

The main aim is to become self sufficient in all the jobs we do, gearing ourselves to do all the renovations and small construction works.

We need to be flexible and respond quickly to members needs, this summer we have had to accommodate six softball pitches amongst our cricket fixtures, no mean feat, especially when the timing of the competitions coincided with a sport change over.

The club tends to buy equipment outright and recently invested, soon after my arrival, in a JD Progator, which has improved the ability to transport staff and resources about more efficiently. As part of the same package we invested in a Gambetti 600 litre demount sprayer and Propass twin spinner topdressing machine. Both items have proved very useful in firstly instigating a programme of applying wetting applications to the outfield areas and later on with top dressing the pitches and squares.

All the staff are multitasking which helps dramatically, they have all been trained to use most of the machinery at the club. The site also includes some formal gardens and hedges to maintain, along with some spring and summer bedding displays. 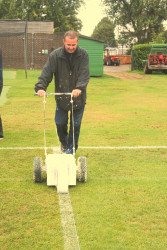 Another of my tasks was to ensure the H&S policies of the club were met within the grounds department and, being a bit of a computer buff and reasonably proficient in working with and designing Microsoft Access databases, I have developed a database that helps me to complete, and store electronically, COSHH assessments, risk assessments, product details, spraying records, PPE issues and first aid stations, and management to name but a few.

The user can call up a form to complete a new pesticide application record and will be presented with a blank form. After filling in some preliminary details the databases powerful query building takes place. When the user chooses the product that he/she will apply, the database pulls data from the product tables and the COSHH assessment table to fill in relevant data for the user, such as product volume rates, formulation etc. and also relevant handling, application and clean up instructions etc. from the relevant COSHH assessment.

This system will be a great asset for us as a grounds team but it does allow for a wider application. It is important we trial it and see how effective and important it will be for ensuring that the BA Club becomes a safe environment to work rest and play.

I am sure we will see some changes for the better in the coming months. It is good that companies like BA believe in the benefits and support a sports and social club for its employees. There is nothing better than a happy team of staff. It is hoped that other large companies rekindle their support in sports facilities for their employees that will, in the long term, benefit the wellbeing of their workforce.

So here's to a bright future for both me and my staff here at the BA Concorde Club.