by Charmian Robinson
in Industry News
on 21 Sep 2010

Harry Jurgens of AFT Trenchers is taking part in the huge vintage car rally from Peking, China to Paris in France. The route will take the teams more than 30 days to complete through more than 9 countries with plenty of stops along the way. 100 cars from around the world made their way by sea for the start on 10th September.

Over 100 years old, the race has come a long way from its first year. Today all the cars are tracked along their route with Skytag, a specialist in vehicle location and tracking system. Hourly updates will show the teams' progress so friends, supporters and family can follow them as the website is updated by the hour! www.pekingparis.com

This is how Harry and his team mate Peter Van De Zilver describe the trip. "We are taking part in the 4th Peking-to-Paris event that retraces the steps of 11 pioneering automobile adventurers in 1907. A once in a lifetime adventure that will never be forgotten. It has also presented us with an opportunity to raise awareness and hopefully funds for Parkinson's disease, which has touched the lives of both of us, through close friends and family."

Peter and Harry have been friends and vintage car aficionados for many years. They first met in high school in the Netherlands, and a mutual love of fast vehicles drew them together. Whether it was a car, a motorbike or a moped, the two boys were obsessed with making the wheels turn as fast as possible. Peter's mechanical skills and their mutual fearlessness meant that speed limits were routinely disregarded as the two bonded and shared adventures on the road.

Skill, perseverance, determination and bloody mindedness will win the day! 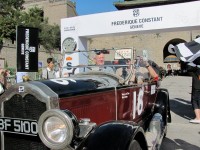 Speed is not going to be the deciding factor in this race though. Peter and Harry will take to the road in a retooled 1925 Buick which Harry saw for sale two years and snapped up. "We will be starting in Peking (China) on September 10th, 2010 and driving over 14,000 kms over rough terrain for 37 days to reach Paris (France)." Explained Harry "We are traveling in a 1925 Buick Roadster (race number 16) which has been restored specifically for the event. Fortunately, Buick is built to withstand prairie and desert conditions and we believe is the ideal choice for the Peking to Paris route."

Essential repairs to men and motor!

Since purchasing the car for the rally, Harry did some additional work, installing comfortable bucket seats in front and restoring the springs, transmission, differential and chassis. In addition both drivers have undergone a rigorous training programme over the last year. Many who know Harry well will have seen and admired the strength of character and sheer will power which has seen this 'sixty something year old' give up smoking, attend punishing fitness sessions several times a week and transform himself into a fitter, leaner man to cope with trials that this trip will be throwing at him throughout the challenging six weeks of the race.

Good luck to the intrepid adventurers and safe journey. Anyone wishing to follow their progress can do so on their own website, www.peking2paris2010.com complete with photos and daily blog.