Advanced apologies for something more akin to a weather bulletin. There is, unfortunately, no other means to encapsulate the opening day of the 116th US Open 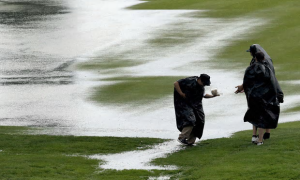 By the time play was halted yesterday at 4.30pm - moments before an epic thundercrack that prompted a collective leap from 800 inhabitants of the media centre - Oakmont's greens staff were heard to put out a call for a helper named Noah. Even he may have looked at the chaotic scene - caved bunkers, unidentifiable fairways and all - before heading in the opposite direction. One of the most famous venues in the United States had been completely submerged. This led to a logistical nightmare and horrendous spectator experience, the former at least being rectifiable.

Nine players had finished their opening rounds by the enforced end of day one. What a lucky, lucky group that is. Half of the field, 78, had not even taken to the course. Those granted a rare Thursday off include Phil Mickelson, Justin Rose, Jason Day, Adam Scott and Henrik Stenson. Presumably Mickelson at least took advantage on what was his 46th birthday. Others - Rory McIlroy, Jordan Spieth, Danny Willett and Bubba Watson among them - must return early on Friday to tie up 18 holes.

"It is a completely different course than we played in the practice round," Spieth said. "I mean, night and day. Hopefully we'll get some good conditions in the morning. And other guys have to play 36 holes in a row at a US Open, which isn't easy."

The man who will look most ruefully upon this messy scenario is Andrew Landry, a journeyman professional from Texas, who leads at three under par. Landry was on his final green, with a 15ft putt for a birdie, when the hooter blared for a third and final time.

No blame can be attributed for freakish elements. The specialism of those running the tournament, plus the likelihood of improved conditions from now on, should mean no lingering issues but it already seems completely skewed. Only an illustrious winner, and Oakmont has a history of precisely that, will return discussion towards that of more routine major matters.

"You can't really control the weather, you can't let it fluster you," Westwood said. "The US Open is a test of patience. This just adds to it. So you have to try and get your head around it and make the best of it."

Wise advice and a sensible ending to an unfulfilling day.

For the original article visit www.theguardian.com.