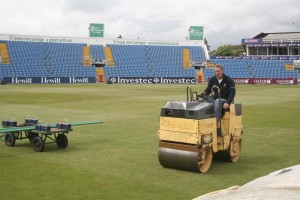 Yorkshire's domination of the County Championship continued at the ECB's Groundsman of the Year Awards as Andy Fogarty's pitches at Headingley earned him the main prize for four-day cricket.

Andy, a Lancastrian who had worked under Peter Marron at Old Trafford before crossing the Pennines in 1996, won the same award in 2011.

He was also commended in the category for one-day pitches, which was won by Somerset's Simon Lee - who was runner-up in the four-day category.

There was yet more recognition for Yorkshire in the outgrounds category as Scarborough's John Dodds was runner-up to Bill Clutterbuck of Guildford, the venue for Surrey's Championship match against Glamorgan. Stuart Kerrison (Colchester) and David Summersell (Uxbridge) were also commended.

Hampshire's Nigel Gray, the 2014 four-day winner, was runner-up to Lee for his one-day pitches, with Nottinghamshire's Steve Birks and Andy Mackay of Sussex also commended

Derbyshire's Neil Godrich and Kent's Simon Williamson were commended in the four-day category.

Every pitch is rated at the end of the match by each of the umpires with these ratings used as the basis for making the awards.

Before the awards dinner a minute's silence was held in memory of Harry Brind and Pete Marron, former winners with Surrey and Lancashire respectively, who passed away in 2015.