Andy Walker, Field Support Manager for Dennis and SISIS, recently celebrated an impressive 40 years of working for the company 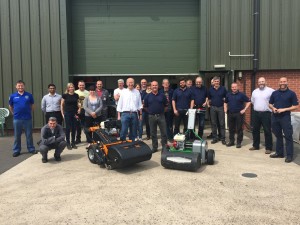 It all started back in 1976 when a fresh faced 16 year old, took a chance and strolled into the SISIS factory looking for a job - the rest as they say, is history.

Andy showed his potential during a month's trial and was offered a permanent role working on the shop floor. He remained in that position for a few months but the ever determined Andy had his heart set on development engineering, where five years later he was supervising that very same department.

2009 began another significant change of direction for Andy when he was promoted to the position of Field Support Manager. He was in this role for two years before the Howardson Group acquired SISIS and it was a move which Andy believes signalled the start of a perfect partnership.

"The two brands complemented one another perfectly - SISIS opened up markets to Dennis and Dennis opened new markets for SISIS."

"It's a nice feeling to work for a company that's getting stronger and stronger all the time. There's excellent management in place, the company is forward thinking and everyone supports each other."

Andy admits that he never dreamed of where his career would take him and 40 years later he's seen some of world's most beautiful places, become a prominent and well respected figure in the turf care industry and seen first-hand the widespread adaptation of several technological advances. It's an impressive achievement - but what's the secret to his long and rewarding career?

"Quite simply - I love what I do. Throughout the 40 years not once have I ever woken up and dreaded going into work. The main reason that I've stayed in the industry for so long is because of the people in it - those I've met at bowling greens, cricket squares, football pitches, people from other companies and especially my colleagues over the years - they've become some of my closest friends and that's something that money can never buy. It's also been great to witness and be a part of the evolution of the turf care industry."