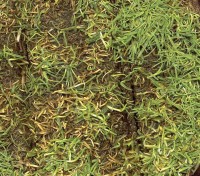 Anthracnose has increased in frequency and severity over the past ten years, Here in the UK and also in the USA and Australia. This article is intended to provide up to date information on the fungus that causes Anthracnose diseases and on the two disease types that are increasingly seen in amenity situations.


Firstly, we should look at the fungus and discuss the reason for its recent change of name. Anthracnose in amenity turf is caused by a fungus that is now called Colletotrichum cereale. In cereals and grasses there are four distinct Colletotrichum species that can cause disease and they are differentiated by their main host plant and by certain specific fungal characteristics (Crouch et al, 2006).

One of the four species, Colletotrichum graminicola, is thought to inhabit a wide range of cereals, grains and turf grasses and this species name has historically been the one used for turfgrass Anthracnose. However, it has generally now been considered that this species should only be correctly applied to Colletotrichum on corn.

Since recent research work has identified clear differences between C. graminicola and the fungus found to cause Anthracnose on turfgrasses, the name C. cereale has been proposed as the new and more correct name for the causal fungus in disease in turf. It is likely that both of these two fungal names, i.e. C. cereale and C. graminicola, will continue to be used to describe this pathogen in turf, but it is important to realise that there is no new fungus - just a new name.

C. cereale is a fungus that produces small, asexual spores (conidia) from specific structures that develop on infected plant tissues. The structures are called acervuli (singular: acervulus) and they have dark, hair-like projections that protect the central spore-producing tissues and cause the affected areas to appear dark in colour.

The spores are released on to the turf and are moved across the sward by irrigation/rainfall, wind or direct means. However, free water or humidity is essential for the successful germination of the spores and entry of the fungus in to the plant.

Once inside the plant tissues the fungus is protected from the environmental conditions but, prior to that, it is susceptible to desiccation which would kill the fungus before it could initiate infection. Assuming the availability of humid/damp conditions, the spore germinates to produces a germ (germination) tube which grows over the plant surface until it finds a suitable location for entry in to the plant. At this time, the end of the germ tube develops into a so-called appressorium, which is dark in colour and which has a characteristic 'boxing glove' shape.

However, when the turf is put under stress, the infected plants can develop symptoms of infection very quickly and it can appear as though the disease has come in overnight. 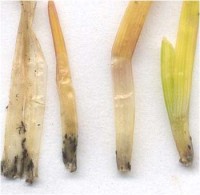 Development of the disease in the crown tissues will lead to a blackened, rotted base to the plant, and the leaf tissues change from green, through yellow to red/orange as the severity of the infection increases. Eventually, the plants can be easily pulled from the rotted crown tissue. In this situation, the disease is referred to as Anthracnose Basal Rot and this has historically been the most widely known and discussed Anthracnose disease in amenity turf.

However, infection can also develop throughout the plant and, as the fungus develops its spore - producing structures (acervuli) on the leaf, the accumulation of the dark spore-bearing masses turn the leaf darker in colour, a symptom that is more noticeable as the leaf itself becomes tan following the development of the infection. In this situation, the disease is called Anthracnose Foliar Blight. Spores are again released from these acervuli and the life cycle is repeated.

Anthracnose Basal Rot has historically been referred to as a disease that only affects Poa annua, and it remains correct to say that this grass, under close-mown conditions, is the most likely to show Basal Rot infection. However, I have definitely seen Basal Rot in Agrostis in the UK but the incidence of this appears to be relatively low. The Foliar Blight disease, however, can be found in all turfgrasses and is becoming an increasing problem on close-mown fine turf areas.

Basal Rot Anthracnose has typically been documented as a disease that develops on Poa annua from late autumn through to spring on areas of turf that may be subjected to compaction and that are maintained under low fertility. Certainly, the development of this disease occurs under cool, wet conditions but the disease can establish at any time of the year.

With regard to Anthracnose Foliar Blight, the disease tends to develop through the warmer summer months but, as with the Basal Rot, this Anthracnose disease also needs free water for infection by the fungus. Anthracnose Foliar Blight is not uncommon on the turf above rootzones that are prone to water-repellence. If the rootzone is repelling water, applied irrigation or rainfall may sit around the base of the sward rather than moving through the rootzone, and this will allow ideal conditions for disease development.

It is possible to identify the presence of C. cereale on the older leaves of many turfgrass swards, and it is important to be able to determine if the fungus is actually causing disease or if its presence is merely that of a saprophyte on the decaying leaf tissues. As with all fungal diseases, the presence of the fungus does not automatically guarantee that it is causing damage to the plant, but analysis of the plant tissues can confirm if the fungus has entered the plant tissues and is causing disease.

One interesting fact that has emerged from research completed in the USA is that there appears to be a certain amount of host specificity within fungal isolates of C. cereale that cause Anthracnose diseases. What this means is that in a mixed Poa/Agrostis sward, C. cereale may preferentially infect either the Poa or the Agrostis but not necessarily both. Although the most damaging symptoms of infection are seen on close-mown fine turfgrasses, this fungus may develop on all cool-season turfgrasses, causing a Foliar Blight infection on most. The Basal Rot infection is still most frequently seen on P. annua in the UK.

Once the symptoms of Anthracnose Basal Rot are seen on the sward, the infected plants will die because of the extensive crown and root infection. Turf affected by Anthracnose Foliar Blight may recover if the infection is detected before it becomes established, but the high rate of spore development is a major factor in affecting disease severity. It is imperative that the turf is maintained under adequate nutrition to prevent a reduction in turf strength as this would likely encourage disease.

A recent article in Golf Course Management (Murphy, et al, 2008) discusses the best practices for Anthracnose management based on the research available to date. The effects of cultural management practices are discussed with regard to disease severity, and the following is a summary of their findings.

Plant growth regulators are now frequently used in fine turf management and applications have not shown them to aggravate Anthracnose disease but, in many cases, have been shown to reduce disease severity. Anthracnose diseases are generally described as stress diseases and management practices that can damage the plant have often been implicated in disease development.

One such practice is verticutting, but research has confirmed that damage to the plant is not a pre-requisite to infection, i.e. the fungus does not need to enter through a wound. Verticutting to a shallow depth (3mm) has been shown to have no detrimental effect on disease severity, but verticutting to 5mm can increase Anthracnose on P. annua.

Mowing height is also another factor that is often implicated in Anthracnose development, and an increase of less than 0.5mm in height of cut can cause a noticeable reduction in disease severity. Raising the height of cut can have a significant effect of reducing many fungal diseases as it reduces the overall stress on the plant by increasing the plant's photosynthetic capacity.

Light and frequent sand topdressing applications have been shown to reduce Anthracnose severity, and water limitation, interestingly, has been found to increase it. The latter is likely due to the detrimental effect that low water availability can have on the physiological processes of the plant and that, if the turf is under water deficit, the plant will be weakened and more susceptible to disease development. Infection of the plant by the fungus still needs water to be available on the surface either as rainfall/dew or irrigation.

With regard to chemical control of Anthracnose diseases, the benzimidazole (e.g. thiophanate-methyl), DMI (e.g. fenarimol, myclobutanil, propiconazole) and QoI (e.g. azoxystrobin, pyraclostrobin, trifloxystrobin) classes show significant curative activity. That said, applications need to be carefully considered because development of resistance to these chemistries is a potential problem and, in the USA, research has identified isolates of C. cereale that show resistance to these classes of fungicide (Wong, et al, 2007a&b, 2008).

thracnose development, this remains an area requiring further research. If fungicide applications are made preventatively, other chemical classes can be included in the programme and, perhaps, one of the key active ingredients is chlorothalonil. With a true contact mode of action, this active ingredient can be applied alone or together with an acropetal penetrant (generally called systemic compounds).

As with many of the fungi that have the ability to cause disease in amenity turfgrasses, there is still a lot for us to learn about C. cereale and the Anthracnose diseases. We do have a number of options for improving cultural control and this can only increase as we learn more about the factors that allow disease development and symptom expression.