Wasps belong to the family Vespula. The life cycle of the four main stinging species of 'social' wasps found in the UK revolves around the queen who is the only member of the colony that lays eggs.

She overwinters in a frost free location such as a hollow tree, a loft space, garden shed or similar and, in early spring when the weather is suitable, will emerge to try and find a suitable location to begin building a nest for this years colony.

The queen chews soft or rotting wood into a pulp. This is taken back to the nest location and mixed with saliva to make the structure of the first ten to fifteen brood cells and the outer casing of the nest. When this is complete an egg is laid in each individual cell. Once the eggs have hatched the queen collects insects and sugar based food to feed to the fast growing larvae and, after approximately fourteen days, the larvae seal the entrance to the cell and begin the process of metamorphosis. 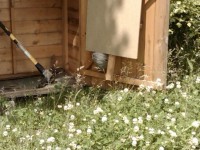 When the first brood have pupated and finally hatched into adults they assume the duties of collecting wood pulp, increasing the size of the nest and feeding the newly hatched larvae. The queen now remains in the nest with the sole task of laying more eggs.

Early on in the life of a wasp nest the majority of the food brought back by the infertile female workers will be insects of high protein content. As the summer progresses more high carbohydrate foods, such as the sugars from ripe fruit and berries, will slowly become the main stay of the diet fed to the larvae.

This is the attraction to our sandwiches, drinks, ice creams and sweets and the reason they are so persistent in their quest. This fermenting carbohydrate diet is the cause of what are often called "dozy wasps" found in houses and gardens in autumn.

In the late autumn the high carbohydrates encourage the production of larger cells to be made in the nest. These cells produce virgin queens and drones which will pupate and hatch just prior to the onset of winter. The new queens mate with more than one of the drones and move away from the nest to find a suitable frost free site to overwinter and then the whole cycle starts again. Over one hundred new queens may be produced from an average sized nest.

Any nests found at this time should be treated as opposed to being left just because "they are causing no problems at the moment". Remember, the emerging queens may start a nest next year that is in a 'problem' location. 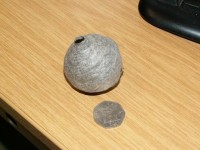 Wasps carry venom that they use to overpower their insect prey and to protect themselves and their nest.

The venom is contained in a sac that has evolved from a redundant egg laying tube in the infertile female workers. This sac ends in a sting which is similar to a hypodermic needle. It is contained in the lower sections of the abdomen of all worker wasps.

When a wasp is about to sting it curls its abdomen, exposing the stinger. A second curl squeezes the venom down the sting and into the victim via the hole made by the hollow stinger. The sting has no barb allowing it to be withdrawn and used again, unlike the stinging bee species we have in the UK which have barbed stings, so they will die after stinging because the venom sac is pulled from the abdomen when the bee flies off.

Therefore, multiple stings are possible by a wasp, each sting reducing the amount of venom delivered. However, this is not such a blessing! When a wasp has delivered its store of venom it releases an alarm pheromone which all other wasps in the area will respond to resulting in them joining the attack on the victim of the first sting. 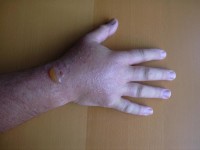 A wasp sting will sometimes cause severe swelling ending with large yellow blisters. Antibiotics and antihistamine tablets should be sought from a pharmacist or doctor.

Taking into account that there is a strong possibility that you may be stung numerous times (and just one sting can bring on the effects of Anaphylactic shock which can be life threatening if medical help is not immediately sought), I would strongly recommend that a professional pest control company is contacted to treat any nests you find. The £50-60 charge would be a small price to pay in comparison to having to carry an adrenaline pen for the rest of your life, or worse, death!

If you must undertake the control yourself then Bendiocarb powder should be your method of choice. Many of the 'off the shelf' products sold for wasp control are based on Permetherin which actually excites them. The last thing you need are wasps that are intent on stinging you because they have been excited even more by a chemical!

A professional pest control company will treat a nest at anytime of the day. If you do choose to 'do it yourself' try to treat the nest in the late evening just prior to darkness when most of the wasps will be in the nest and not flying around you as you approach. Always work down wind of the nest and be sure not to wear any aftershave or have any strong smells on your clothes. These will give away your location to the, by now, very agitated wasps.

Areas where wasps are a nuisance, but the nest cannot be found, can be made less of a problem by hanging wasp pots upwind of the location. Commercial wasp pots are available with a lure based on fermented fruit juice. This encourages the wasps inside the traps where they become exhausted and drown. If the pots are regularly emptied and refreshed the number of worker wasps that die will be greater than the number of new adults hatching, creating a situation where insufficient food is reaching the nest. This causes the whole colony to collapse. We always use at least four wasp pots in these situations. 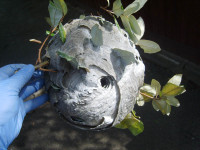 Badgers will dig out a nest during the night to get at the larvae. Any wasps that are not taken or killed by the badgers will not be particularly happy in the morning, and the area should be avoided, unless you are wearing suitable protective clothing, for at least a few days.

There are no other predators that cause any serious inroads into a wasp population.

Wasps do offer a small amount of insect control, including aphides but, all things considered, they are not that beneficial to man.

In short, you should control wasp nests at all times. But, be very careful if you treat them yourself.

The main thing that worries people about wasps is their sting.

A wasp uses its sting for killing prey, but it can also use it very effectively for defending itself. The sting has associated glands which produce a venom. In some cases people do become ill after being stung and, in very extreme cases, people suffer anaphylactic shock which can prove fatal.

A sting in the mouth or on neck can be serious, as the mucus epithelium (see below) may become very swollen, making it difficult for the victim to breathe. An ordinary, uncomplicated sting can be treated with ammonia, alcohol or cold poultices, followed by antibiotics. If the victim becomes pale and feels unwell with giddiness and nausea it is advisable to seek medical advice immediately.

Any person who feels that they are at risk, or has any suspicion of any reaction, must consult a doctor. This is a real life-threatening reaction. Any 'half measures' may prove fatal.

Anaphylactic Shock is an antibody-antigen reaction in the body which may produce a state of profound collapse. This is characterised by increasing difficulty in breathing and failure of the circulation brought about by general dilation of the small blood vessels and the escape of plasma (the clear liquid which carries the blood cells) into the tissue spaces.

Anaphylactic Shock can also be caused by the injection of vaccines, atisera or antibiotics.

Hydrocortisone is given intravenously in large doses, and is often accompanied by epinephrene or a similar drug. If respiratory distress is marked it is necessary to cut into the trachea (windpipe) to make an artificial opening (tracheostomy).

Fortunately, the condition is rare. Often undue sensitivity to injected substances can be demonstrated by the use of small test doses, but even a small test dose may trigger off anaphylactic shock in a receptive individual. Those who feel faint or start to swell in the face after an insect bite or sting should immediately seek a doctor's advice, although neither of these reactions necessarily heralds anaphylactic shock.

Antibodies - antigens: When certain foreign bodies and, therefore potentially harmful substances, enter the body, the body reacts to the threat by producing antibodies. An antibody is a chemical compound (protein) which has the ability to combine with, and render harmless, a specific foreign substance. The foreign material itself, which initiates the reaction leading to the formation of specific antibodies, is known as an antigen.

Mucus Epithelium: Mucus Epithelial tissues perform many activities in the body, ranging from protection of underlying tissues against microbial invasion, drying out and harmful environmental factors to secretion. The mucus membranes are forms of these tissues and can be affected by anaphylactic shock, thereby causing breathing difficulties.