0 Ants are abundant insects in most gardens and often cause concern, but they are a nuisance rather than a damaging pest. 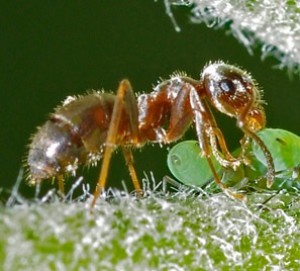 Ants are abundant insects in most gardens and often cause concern, but they are a nuisance rather than a damaging pest.

Ants can cause concern but they are a nuisance rather than destructive pests. They feed mainly on insects, including other ants

They also collect the sweet liquid known as honeydew, which is excreted by aphids and some other sap-feeding insects.

Ants can protect aphids from attack by ladybirds and other predators in order to secure their supply of honeydew. Increased numbers of aphids may result in more damage to plants.

They do little damage to plants themselves, except by disturbing soil around plant roots and depositing it on the surface during their nest building activities. This can be a nuisance on lawns and where low-growing plants are being buried by excavated soil.

Some ants (mostly Myrmica species - commonly known as red ants) can sting, but for most people this is no more than a minor irritation

Non-chemical control. Unless nests are particularly troublesome, ants are best left alone. If a colony is destroyed it is likely that its place will be taken by in-coming queen ants, which take over the territory and establish even more new nests.

Disperse ant heaps on lawns by brushing the excavated soil on a dry day before the lawn is mown, otherwise the soil will get smeared on the lawn surface by the mower. If the lawn has an uneven surface due to years of ant activity, peel back the turf in the raised areas, remove excess soil and relay the turf. This is easier to do in the winter when ants are less active.

A pathogenic nematode, Steinernema feltiae, is available from some mail order suppliers of biological controls for treating ant nests in lawns and flower beds. The microscopic, worm-like nematodes are watered into the soil in places where ants are bringing soil up onto the surface.

Many proprietary ant powders, baits, sprays and aerosols are available for controlling ants in and near buildings, but these are not suitable for general garden use or application on plants.

To make a real impression on ant numbers it would be necessary to destroy the nests rather than just the foraging ants. That is difficult to achieve as ant nests occupy a much larger volume of soil than the surface excavations might suggest. In most situations it is best to tolerate the presence of ants.

Ant nests contain one or more fertile female ants, known as queen ants, which lay eggs in brood chambers within the nest. Most of the other ants in a nest are smaller wingless sterile females, which are known as worker ants. Their role is to maintain, guard and enlarge the nest, feed the larvae and gather food for the colony.

The white maggot-like larvae are fed on a liquid diet secreted by the worker ants.

When fully fed, the larvae turn into pupae.

Some species of ants pupate inside spindle-shaped whitish-brown silk cocoons. These cocoons are often mistakenly referred to as 'ant eggs'.

The real eggs are very small and not easily seen with the naked eye.

At certain times of year, ant nests produce winged ants. These are young queens and male ants, which often emerge en masse from nests during humid weather in the summer. These fly up and mate, after which the males die and the young queens try to find suitable places where they can establish new nests.

Once mated, the queen ant no longer needs wings, so they are bitten off.

Credit: RHS/Mike Ballard. See the rest of this informative article on the RHS website