by Sarah Beauchamp
in Industry News
on 23 Sep 2009 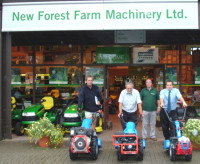 In June Tracmaster announced that they were looking to recruit a number of new dealers across the UK and Ireland which generated a great deal of interest. The first two new dealers to be appointed are Ron Smith & Co with branches in Hereford and Worcester, and New Forest Farm Machinery based in Ringwood, Hamsphire.

Ron Smith & Co Ltd is a family run business with over 40 years experience in selling and servicing garden machinery and is one of the largest garden machinery retailers in the UK with branches in Hereford and Worcester.

New Forest Farm Machinery is located in modern, purpose built premises with well equipped workshops, showrooms and trial areas. They have an extensive parts department and full service facilities, and there is easy onsite parking.

Nick Clarke, Director of New Forest Farm Machinery said "Initially we were looking for heavy-duty rotavators that would be suitable for customers who had previously used machines such as the Howard Gem. When we looked at the BCS and CAMON ranges we were very impressed by the build quality and how robust the machines are. Combined with the service provided by Tracmaster, we felt that it would be a very beneficial partnership for both of us."

The quality and reliability of Tracmaster's machinery attracts a broad cross section of customers; Local Authorities, Landscapers, Conservation Groups, Allotment Societies, Smallholders, Schools and Sports Clubs. Tracmaster's success means they can count on organisations such as The National Trust, The RSPB and Natural England, together with companies like HSS, GreenThumb and South East Water as longstanding customers.

Apart from regular stocking offers, marketing collateral and full training for all dealers Tracmaster promote their dealers via their website; www.tracmaster.co.uk and provide referrals for sales, servicing and warranty work.