by Charmian Robson
in Chemicals & Fertilisers, Golf, and Industry News
on 28 Feb 2016 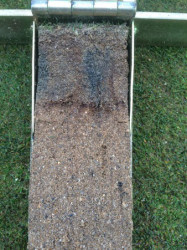 The trial was carried out by Golf Course Superintendent Gerard McEvoy, who had been looking for a product that included gypsum in the correct formation of calcium sulfate dihydrate to break down the black layer.

Gerard has been at the course since it's construction in 2005 and was aware of the black layer problem on the greens. He had been treating with hollow coring whilst looking for a gypsum based product.

The aim was to see how effective Verde-Cal G was against black layer, and he explains how the trial was conducted, why gypsum is so important and the outcome of using the product.

"I found the Verde-Cal G to be very easy to apply; the solubility is very good and it breaks down very rapidly." said Gerard.

"We put down four applications on the second green and one application on all the others, so we treated our worst green quite heavily to see if we could break down any layers that we might have in them."

"You can see by looking at the pictures, there is a massive difference in the two samples and it clearly shows the Verde-Cal G did a great job in dispersing the back layer."

Verde-Cal G is a Calcium Sulfate in a very fine granular form combined with thCaTM - an organic complexing agent - the calcium in gypsum becomes more readily applicable for soil or plant use without effecting or raising ph. 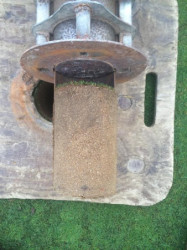 The amalgamation of these chemicals leads to a quicker response at lower rates; loosening compacted heavy clay soils, and improving aeration and water percolation being the most common benefits.

VerdeCal G will be visible in CEC readings within 1-2 weeks after initial application; Normal calcium or gypsum products take up to 4 years to become available for the plant uptake. The product releases locked-up ions from the soil profile and make these nutrients available for the plant to use. Also leaches excessive Sodium (Na) and Magnesium (Mg) from soil profile.

There are two forms of gypsum; dihydrate and anhydrite. The dihydrate form is the most freely available, and is just what Gerard was looking for when he was considering Verde-Cal G. VerdeCal G also has a very high Ca content, over 22%. (Over 4 times compared to normal Gypsum) That is one of the reasons why this product is so effective.

"We wanted to use gypsum because it is a flocculent, so it aggregates the soil partials together and opens up the soil profile without raising the pH," he began.

"This helps to increase the percolation rate of water through the soil profile."

"The main reason for using it was because the upper layers of the greens were retaining too much moisture despite a very aggressive aeration and topdressing program applying over 200 hundred tonnes of sand to the greens per year." 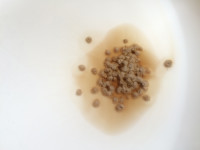 In February 2015 the greens underwent their first of two hollow corings using courser sand than normal. Verde-Cal G was incorporated after the second hollow coring, with the first application going on in August followed by repeat applications at four weekly intervals.

"We normally see the black layer forming in the wetter months of the year, so we began our Verde-Cal program in august to try and prevent it from re-occurring. This coupled with the use of a coarser sand when hollow coring seems to have worked."

One application of Verde-Cal G was put on at 50 grams per metre square to the second green on the second week of august. This was repeated again in September, October and November until the soil profile was analysed again at the beginning of December.

The sample showed a vast reduction of black layer in the second green with a healthy and open soil profile that is able to cope with heavy amounts of rain fall going into the winter months.

For more information on the range of products please visit the www.aquaaideu.co.uk