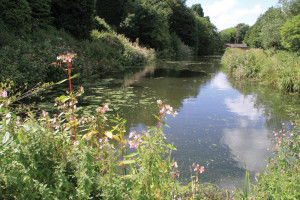 Aquatic situations are complex because of the variety of habitats and the implications of using pesticides around water. There are explicit guidelines, although these are under constant review mainly because of the Water Framework Directive.

The Water Framework Directive is legislation that has been created at the European level and has been approved by all Member States and is currently being implemented by the UK Government. It means that the Environment Agency reviews the impact of all materials on water systems on a catchment basis. A number of herbicides are currently under review to ascertain if they are being found within the water systems.

How does this impact how we control problems in aquatic systems?
Over the last decade, a significant proportion of the pesticides that we used and took for granted have lost their approval for use. Within an aquatic system, chiefly, we relied upon Dichlobenil granules (Embargo G and Casaron G), these would sink to the bottom of the pond and control the plants in situ. However, it was deemed that there was the potential for these herbicides to be found within water and, therefore, they were removed from the list of approved products. However, this does leave us with a problem: there are no chemicals that are approved for use within the UK that can be used to control plants that are submerged within water. There is an important distinction to make here: plants that emerge from the water or are floating on the water can be controlled with the use of Glyphosate with the specific written approval of the Environment Agency.

These three species can all re-colonise via water borne seeds or vegetative fragments. Consequently, to be truly effective, any control programme needs to be coordinated on a catchment wide basis. Further advice specific to these three species is offered on the Pitchcare iGuide section, along with details on controlling other difficult problems.

Cultural control
An overview of the situation enables us to identify a number of common factors which it is useful to consider in relation to weed control within an aquatic situation;

Water bodies are characterised by their concentration of nutrients, the main indicators being inorganic nitrogen (N) and total phosphorus (P). Although the use of nutrient levels, as a defining parameter, simplifies the complex interactions that occur between plant nutrients and the hydrological and physical characteristics of individual water bodies. However, it is useful to start considering nutrient flow through aquatic situations and managing them appropriately. 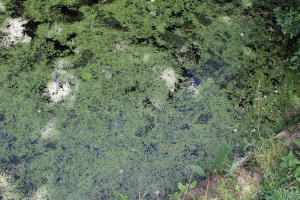 Riparian vegetation management is a complex subject. Emergent plants are easier to manage than submerged vegetation and, with a reduction of herbicides that can be used, it seems wise to look at the options for cultural management. Before any weed cutting is carried out (especially in rivers), contact the local Environment Agency Fisheries Ofﬁce to check that the proposed work is appropriate.

Reeds can be cut by hand or by machine, using weed cutting buckets or boats. The choice of technique depends on the area involved, a risk assessment and on factors such as water depth, ease of access and availability of suitable equipment. Cutting only removes the emergent shoots and does not affect the buried rhizomes from which new shoots will emerge. If cutting is carried out early in the season in May or June, a second cut may be necessary before the end of the season. Also, May to early July is the period when birds are nesting and cutting should not take place before mid July unless absolutely necessary. Delaying the cut until later in July and August reduces the time for shoots to regrow before the end of the growing season.

Dredging often removes the rhizomes as well as the emergent shoots and so produces longer control, but is generally too expensive to be used purely as a method of weed control. When it is anticipated that a water body infested with rushes, reeds and sedges will require dredging, it may be beneficial to spray the emergent weeds with glyphosate at least three weeks before dredging to kill the rhizomes and prevent their spread from dumped spoil into adjacent land.

Removal of cut weed from the water body reduces opportunities for associated invertebrates to drop off and remain in the watercourse; temporarily depositing it close to the water's edge allows mobile invertebrates to migrate back into the river. Leaving it here for longer periods can result in water pollution due to its breakdown. Risks associated with deoxygenation of the watercourse, and the provisions of the Water Resources Act, 1991, also mean that cut weed should never be allowed to remain in the water body. Some emergent weeds, particularly Phragmites australis (the Common Reed), do not decompose in the autumn and, in some situations, it may be necessary to cut and remove the dead shoots in autumn to clean the channel and prevent impedence of winter flows.

There has been little research comparing the effects of manual and mechanical methods of weed cutting on stream ecology. However, mechanical cutting, using either weed cutting boats or a Bradshaw bucket mounted on a hydraulic excavator, has the potential to remove greater amounts of weed in a less selective manner than manual methods. As a consequence, the use of such devices should be avoided, unless absolutely essential. Dense bankside scrub provides a valuable habitat to many birds and mammals, especially otters. 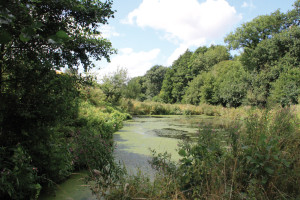 Where they exist, belts of continuous low scrub should be preserved on at least one side of the river. Dense, woody scrub can be usefully coppiced in blocks to promote strong regrowth. Any work should be carried out as late in the year as possible to avoid disturbance to otters.

Different management regimes can be applied to favour a variety of plant and animal species. Coppicing, pollarding, grass and marginal vegetation cutting should all be carried out on a rotational basis and during periods that minimise impacts to species associated with that habitat type. Single bank management should be practised where possible.

As with all chemicals, herbicides should be used with care. Professional advice should be sought from a BASIS registered advisor and written consent is required from the Environment Agency for the use of glyphosate.