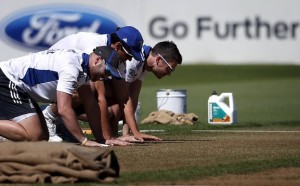 he groundstaff of venues the cricketing world over are being unfairly accused of spoiling Test cricket by producing consistently placid and docile wickets that favour only the batsmen and the chief executives. But it is not entirely their fault.

For every groundsman who wants to turn out a competitive, challenging deck for both batsmen and bowlers, there is a 'suit' behind them extolling the value of having five full days' worth of 'bums on seats'.

It is presenting a major problem for the game, of that there is no mistaking. Wickets across the world are becoming increasingly equilibrated and worryingly prosaic. Bowlers are being judged on their economy rates and averages are skewed.

The road at Dunedin used for the first Test match was widely criticised for ensuring that no result was really possible, despite England's best efforts to force a result by batting with their eyes closed and their heads up in the air on a dismal first day.

Both captains duly arrived at the Basin Reserve for the second match of the series eagerly anticipating what they had heard would be a 'green-tinged carpet' which would provide long-overdue encouragement and support for the seamers.

Brendon McCullum and Alastair Cook were both ready to win the toss and elect to bowl first, and it was the Black Caps skipper who was left to bear the brunt of abuse from the Kiwi press after his decision was quickly undermined by what turned out to be yet another flat track.

It has long been the case that many pitches on the sub-continent have ensured that records could be all-too-easily broken and huge scores plundered with averages bolstered across the board, but this is no longer a situation confined to Colombo or even the Antigua Recreation Ground in the West Indies.

Grounds such as Headingley, the WACA and previously Galle have proved to be rich contributors to the Test match landscape with the established variety and identity of their wickets, but the unique characteristics of different venues are increasingly rare.

Pitches are increasingly uniformed and characterless, with bowlers left to slog it out on feather beds, dead puddings or cemented belters. Are spectators willing to pay to watch one-sided encounters between ball and bat? The stats suggest not.

McCullum, who has spent much of the early part of this series bemoaning his side's lack of quality and depth with the bat, has seen those perceived weaknesses comfortably accounted for with desperately dull wickets in a part of the world not renowned for providing easy runs.

Make no mistake about it, England's batsmen contrived to make the pitch at Dunedin appear to offer a competitive battle between ball and bat; it was, in reality, far from conducive to enabling a result. This is the case for pitches the world over, with only epic collective failures with the bat allowing bowlers a sniff.

This is far from a sweeping condemnation of New Zealand wickets, however, despite bowler Ian Butler admitting that his country's tracks had "become very, very flat". The fact is, a worryingly large proportion of grounds on the international circuit are producing roads for purposes in stark opposition to simply helping to create a good game of cricket.

See the rest of the article on the following link :- http://uk.eurosport.yahoo.com/blogs/cow-corner/characterless-pitches-ruining-test-cricket-015039291.html