Increasing the speed of greens has been an objective that has been pursued for the last 30 years or so. Originally it was recognised that fine textured grasses produced faster greens than the broader leaved weed grasses such as annual meadow grass, but speed was 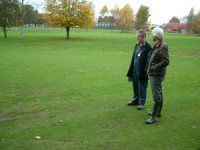 not really a priority.

Since the 1970s a great many, often disastrous methods have been tried to improve the speed of greens. However, many of these only gave temporary effects. The most commonly used method was to shave greens really close, but this lead to the greens being known as "the quick and the dead".

In the search for faster greens, some objective rather than subjective measure was needed, and the Stimpmeter was adopted. This simple tool was invented in 1935 by the US golfer E.G. Stimpson, to achieve "accurate, objective, statistically valid measurements", but it was not introduced into the UK until the 1980s.
The following standard measurements have now been adopted for regular and tournament play.

Without taking these measurements as "set in stone", it is possible to use them to assess the speed of each green on the course, and work towards a consistent standard. The key to achieving good green speed is consistency from green to green, rather than individual measurements. By paying attention to the factors that affect green speed and taking changing weather patterns into account it is quite possible to improve the consistency of play around the course.

The most important factors affecting green speed are:

The main aim is to produce greens with a firm, dry, even surface. To achieve this, drainage, the weather, and openness to light and air movement are important factors. Greens are always faster in dry years, and are generally faster from July to September i.e. in the summer months. It is very difficult to have fast greens in the spring when growth is inconsistent.

Lowering mowing height is the technique most often used to increase green speed. Indeed, reducing the height of cut from 7 mm to 5 mm will generally improve green speed, but reducing the height of cut further to say 3 mm creates excessive stress and kills the greens. The turf grasses just cannot survive, as they do not have enough leaf area to provide the energy to keep the turf alive. Tests at Pennsylvania State University which is famed for its turf research have showed that cutting at 3 mm gave no worthwhile improvement in green speed over mowing at 5 mm.

Frequency, not severity of cut is most important in establishing really good playing surfaces. This does not mean that more clippings are removed, but that the more often the greens are cut, the more polished the surface becomes. This polished surface offers less rolling resistance to the ball and so speed increased.

Verticutting and grooming take out coarse and uneven growth and reduce the thickness of clumps. They also eliminate the nap on greens and so help to improve green speed. Verticutting can be carried out weekly in periods of good growth, and the greens can be groomed 2 or 3 times a week.

If greens have a layer of soft spongy thatch just beneath the surface then they will be slow. The thatch layer holds on to moisture and is a result of poorly drained acidic greens. Regular scarifying will reduce the amount of thatch and improve the firmness of greens.

Over use of fertiliser especially nitrogen promotes lush soft growth, and undesirable coarse grasses. Adopting a more restricted fertiliser programme discourages the weed grasses and tilts the balance in favour of the desirable fine leaved fescues.

Some irrigation is obviously important, but the overuse of water like the inappropriate use of fertiliser will promote the development of lush soft slow greens.

Regular topdressing of the greens is valuable in producing a more consistent and smooth putting surface, but choice of the wrong type of dressing can be deleterious. Too much soil or worse still peat in the dressing will promote the development of a soft damp surface and will create a slow putting speed.

Light rolling of greens has been shown to improve pace, but it does also cause compaction, which then has to be dealt with by aeration techniques. However, it is less damaging than shaving greens too short and causing death of the turf. The simplest and least damaging method of rolling the greens is to place a weight in the grass box of a hand mower with the blades set up.

The answer to producing fast greens is to produce conditions that favour the fine grasses. Annual meadow grass greens no matter how well managed will never be as slick as fescue greens. The solution then is in sound, long term, "old fashioned" greenkeeping, with the addition of a few short-term remedies such as grooming and rolling. The worst thing that can be done is to shave the greens in search of short-term improvement, as this will lead to death of the fine grasses and a more uneven surface.

At any good golf club a long-term programme can be adopted that will result in more consistent and faster greens. This programme should include daily mowing, the use of regular light topdressing, regular verticutting and grooming, some scarifying, and the careful use of irrigation and fertilisers. The introduction of short-term measures should be resisted as this can cause long-term damage to greens.


Other information on stimpmeters c/o off USGA web site