by External source
in Conservation & Ecology
on 30 Aug 2014

It's become something of a rite of spring. Every March, newspaper stories sprout about local beekeepers opening their hives to find an ongoing environmental mystery.

Instead of hungry bees ready for the first flights of spring, honeycombs that should be empty after a long winter are full, and instead the hives are empty. For some reason, during winter's coldest months, these bees chose to leave the hive to perish outside. 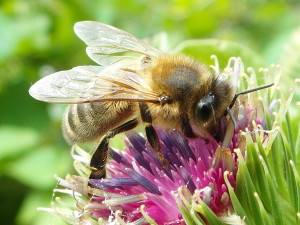 Colony collapse disorder, as the condition is known, remains a mystery with troubling implications for the fate of the human food supply, which depends, in part, on pollinators like the honeybee. Explanations that have been offered include pathogens, modern beekeeping practices, malnutrition, climate change, and pesticides.

It is that last possible cause that stands out to Harvard School of Public Health's (HSPH) Chengsheng (Alex) Lu, an associate professor of environmental exposure biology, who believes that the potential human health implications of colony collapse disorder extend beyond the drop in pollination - though that is worrisome enough - to the impact on humans of long exposure to low-level poisons like neonicotinoid pesticides, which have been suspected in the bee disorder. To Lu, it is an open question whether there are links between the pesticide and the recent increase in neurological conditions in children such as autism and ADHD.

To get to the bottom of the mystery, Lu has conducted pioneering research on the impact of neonicotinoid pesticides on honeybees. In a study published in 2012, he replicated colony collapse disorder experimentally, feeding bees sugar water with different levels of neonicotinoids over 13 weeks in the summer and watching what happened.