0 Are Tall Fescues Suitable as a Sports Turf Grass? 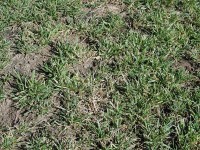 Slow to establish, coarse in leaf texture, less attractive, and not tolerant of typical lawn or sports turf mowing heights; just some of the reasons to ask whether tall fescues are suitable for sports turf grass

Tall fescue (Festuca arundinacea) is a cool-season grass adapted to a wide range of climatic conditions, including temperate and sub-tropical regions. It does particularly well in the transition zone of the US, where summers are too hot for ryegrass and smooth-stalked meadow grass and winters are too cold for bermudagrass. Tall fescue is also adapted to the English climate, but has not been used as a sports turf grass.

The main reasons for this have been listed as: slow to establish, coarse in leaf texture, less attractive, and not tolerant of typical lawn or sports turf mowing heights. While this was the case twenty years ago, I think it does not accurately reflect the tall fescues that are on the market today.

History of Turf Use:

The first tall fescue cultivar used in turf was called Kentucky-31 and was released in 1943. Millions of pounds of Kentucky-31 seed are still produced in the US each year and it is used as a low-maintenance ground cover just about everywhere - lawns, athletic fields, golf courses, parks, and general turf areas. The main problem with Kentucky-31, as a turfgrass, is its aesthetic appearance. It has a very coarse leaf texture, is light green, forms clumps and does not mix well with other grasses.

'Turf-type', or improved varieties of tall fescue, came onto the market in the early 1980s. The newer cultivars have leaves that are 30-40% finer and tiller densities much greater than Kentucky-31. They also have a darker colour and can withstand closer mowing (see Figure 1). Turf-type tall fescue cultivars are listed on the National Turfgrass Evaluation Program website (ntep.org). The STRI also evaluates several cultivars each year and the results are posted in their annual Turfgrass Seed Booklet (stri.co.uk)

Tall fescue is a tufted bunch grass that may, or may not, have short rhizomes. On sandy soils, where plants are spaced out, rhizome development is something that has been observed and reported by many turf breeders. However, research at Ohio State would indicate that rhizome development of turfgrasses in general is heavily influenced by turf density and soil compaction.

In our study, tall fescue rhizomes were present (Table 1) but, under heavy traffic, they did not generally produce daughter plants as readily as smooth-stalked meadow grass. With that said, under consistent heavy traffic, none of the grasses had the ability to fill in bare spots and all grasses needed over-seeding.

A key advantage to tall fescue is its extensive root system, which is generally several centimetres longer than the other cool-season grasses (see Figure 2). This means that, during heat and drought periods, tall fescue can access water deep in the profile and, therefore, can survive most hot and dry summers. For that reason, it has been marketed as a drought-resistant grass, where it should probably be more accurately termed a drought "avoiding" grass.

In instances where tall fescue is used as a lawn grass, it stays green and tolerates most hot summers when the perennial ryegrass and smooth-stalked meadow grass would go dormant without supplemental irrigation.

The substantial root system also makes tall fescue very wear tolerant, especially once it has matured which, typically, takes two growing seasons. For tall fescue to be used on a sports pitch, it must have time to establish before the pitch is used. Unlike perennial ryegrass, tall fescue cannot be seeded in the spring and played on in the autumn. It really needs at least two growing seasons to reach a mature age where it can withstand intense sports traffic. Once it is established however, it is extremely wear tolerant (Figure 3).

Additional advantages of tall fescue include its ability to survive in shaded environments and its 'endophyte' content. Endophytes are intercellular, symbiotic fungi that confer drought and pest resistance to tall fescues through production of toxic alkaloids. Research at Ohio State has shown that foliar feeding insect problems can be eliminated if 40% or less of the turf contains endophytes.

One way to ensure a uniform, fine textured turf is to mow it regularly, no higher than 50mm. In our trials, tall fescue performed well and mixed with smooth-stalked meadow grass at mowing heights as low as 38mm, but started to lose density and textural quality at mowing heights above 75mm.

There are several issues for turf managers maintaining tall fescue. Firstly, worn areas need to be overseeded regularly or small clumps will form (Figure 4). Ideally, tall fescue should be overseeded during the playing season, but tall fescue would probably not establish quickly enough and perennial ryegrass would need to be used. This could lead to an unfavourable mix of grasses on the pitch, with the perennial ryegrass eventually taking over.

Next, while there have been major strides in developing cultivars resistant to leaf spot, there has been little improvement in the resistance to brown patch disease and little is known of the tolerance to fusarium. Brown patch is a serious warm weather disease that can develop rapidly in hot, humid environments (24-35°C). It would appear that the development of much denser cultivars of tall fescue has actually caused an increase in brown patch disease occurrence, possibly because the turf canopy holds more moisture. 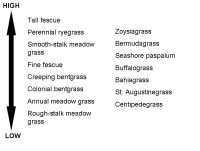 Studies conducted by plant breeders found that disease severity was highly correlated with leaf blade density, suggesting that future cultivars may need to have a lower density, in order to have increased brown patch resistance.

Good management practices, in conjunction with the selection of more resistant turf cultivars, are typical pro-active approaches to any turf disease. With brown patch there are key factors that affect disease severity. Most notably, it is important to be cautious about nitrogen fertility and water during hot and humid weather.

In conclusion, the quality of turf-type tall fescue has improved significantly over the last ten years and it may be a viable option for turf in the UK, especially on low maintenance areas and home lawns where mowing heights greater than 38mm are acceptable. In those situations where shade, drought, and heavy traffic are deciding factors, it may be worth some investigation. Whether it can compete with perennial ryegrass as the sports turf grass of choice is another matter. The establishment speed, tolerance of low mowing heights and uniform fine texture of perennial ryegrass makes it extremely useful for sports in the UK.