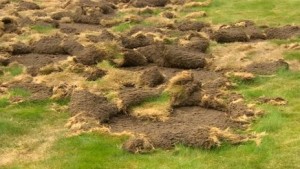 Badgers have invaded a garden in a Birmingham suburb and done a fair bit of damage to what should be a nice piece of lawn. Owner Peter Wall got in touch with BBC Midlands Today, and he is certainly unhappy. Although he does not wish any harm on the animals, he just wants them to leave his lawn alone.

So, are "urban badgers" becoming more of a problem overall - and if there are badgers living in our towns and cities, are they actually a different sort of animal when compared to their country counterparts?

Different beast There is not as much data about urban badgers as you might expect, but fortunately one researcher looking into this very area has recently moved to Warwickshire.

Ben Devine now works at the Warwickshire Wildlife Trust but, he has only recently finished an extensive study of urban badgers in Sheffield and the implications for expanding urban badger populations all over the UK.

First of all, it does appear that the urban badger is a different beast to those found in the countryside.

According to Ben's research and that of others: "Urban badgers differ in their behaviour and ecology to rural populations in terms of diet, population dynamics, social organisation and ranging/dispersal behaviour".

It is likely that diet might be a problem here.