0 Are we Being Grassed Up?

Artificial grass was accepted by FIFA as an official surface in 2005, but the continuing developments by the artificial grass industry have contributed to such high quality surfaces, FIFA claims, that they believe it is fair to refer to them as 'football turf' since late 2009. But, the debate about whether the surface contributes, or prevents injuries from happening is still ongoing.

"The problem is that, in many competitions, players only play a match on artificial grass a few times per season. Most of the matches they play take place on natural grass. But, regardless, the quality of the surfaces, it takes up to six weeks for a human body to adjust to a new surface, meaning that, in the days or even weeks after a match, players can sometimes still complain about stiff muscles and irritated ligaments," says Jules van de Veen, a physiotherapist who has studied the correlation between injuries and artificial grass surfaces.

"Other complaints are caused because few players really take care of their feet and fail to realise the importance of selecting the right footwear. Manufacturers of shoes have not come up with a shoe specifically for use on a football turf surface like they have done for hockey. And, contrary to hockey and athletics, shoes used for football don't contribute to shock absorption or energy restitution."

"These shoes are 'stiff', so it is the human body that has to compensate for the hardness or softness of a surface. But most of all; players do not realise that artificial grass surfaces tend to be warmer. These surfaces are made of plastic fibres and often have a black rubber infill between the grass blades. Both reflect the heat of the sun. Because of that heat reflection, feet tend to swell up and the shoes don't compensate for that."

"No wonder that many players complain about shoes being too small after a match." Van de Veen believes that the current range of shoes can be improved by another 30%. "And shoes specifically designed for use on an artificial grass surface could add another 20% improvement. So, all in all, there is still much to achieve."

Despite FIFA claiming that the quality of artificial grass is similar to that of a natural grass field in a pristine condition at the best time of the year, the surface is less forgiving than natural grass. "Artificial grass doesn't tear when you plant your studs in the surface and want to run off," Van de Veen points out. "The tension and pressure this places on the ligaments is another cause for complaints and injuries." According to Dr Jan Ekstrand, the inability of artificial grass to handle tension at an angle is something FIFA has to investigate.

Ekstrand has been involved in researching the surface on behalf of UEFA since early 2000. "The FIFA quality standards do have a benchmark for shock absorption, but this is measured vertically, whereby the testing equipment stands on a field at a 90 degree angle. Yet, no player interacts with a field completely vertically. There is always an angle."

According to Ekstrand, the trend to install a shockpad underneath a field that has recently entered the market is something that could contribute to the reduction of possible injuries on muscles and ligaments. "These shockpads tend to divert the energy that is exercised on the field in a horizontal direction. Because the energy now moves horizontally, a field will have less vibration, which is actually the cause of many injuries, as these vibrations go into the soft tissue of a body and make muscles and ligaments react. And, as the leg is in an angle, possible vibration will not make it all the way to the muscles and ligaments in the first place."

But, where the FIFA quality criteria do have a benchmark for shock absorption, testing criteria for this vibration, better known as 'energy restitution', is no longer part of the testing criteria. "Some countries did have quality criteria for energy restitution several years ago, but this has fallen away since their national standards were harmonised with those of FIFA. There are, however, talks to have criteria for shock absorption re-introduced."

Use of shockpads seems to have become more common these days. "Field installing companies have realised that the thick layer of rubber that they used to use, tends to compact within a few years and, given the fact that this rubber is a recycled material, it is also difficult to predict its performance and durability. By using a s 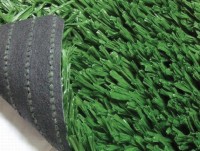 hockpad, the shock absorption and energy restitution of a field is guaranteed, but it also allows for a thinner layer of alternative infill material that is produced specifically for its purpose," Frenk Stoop of Sekisui Alveo points out.

The Swiss company does a lot of research in comfort and safety of artificial grass fields. According to Stoop, there are various solutions to improve the elasticity of a field. "Some fields make use of a thick layer of lava and rubber, whilst others use a combination of asphalt and rubber. And then you have the foam layers that are specifically produced for this purpose, and which keep in mind the environmental and practical disadvantages of the two existing solutions."

With the introduction of infill material that is specifically produced for its purpose, the artificial grass industry claims that a new era is about to start. "Installing companies call fields that use the combination of a shockpad and alternative infill material an 'engineered' system, as all the specs have been calculated and measured. They know exactly how the field will perform and for how long, thus ensuring that the customer will receive a field according to his or her requirements."

Use of a shockpad for football could stimulate the acceptance of artificial grass in rugby. The International Rugby Board's (IRB) quality standards are close to those of FIFA, except the IRB, being more demanding on the shock absorption of a field, a demand that was hard to be met by FIFA. "It would not be appropriate to prioritise injury types. It is always the case of FIFA consulting with players and medical staff to find out what their main concerns are when playing on a certain type of surface," a FIFA spokesperson says.

Where the IRB is concerned about possible head injuries for players being tackled, FIFA does not want to make a field too soft from fear it will contribute to fatigue of the players. Based on such consultation, in 2010, FIFA commissioned research into fatigue and ankle dynamics during a one-month research programme in three countries in Europe. Whilst this research is yet to be peer-reviewed and published, the indications are that there are no significant differences between high quality natural turf and FIFA certified Football Turf pitches in relation to these two areas.

A layer that would improve the shock absorption and energy restitution of a field, without contributing to fatigue, could see the same field being used for both football and rugby, making the investment in an artificial grass surface worthwhile for many municipalities and schools around the world. Football is, by far, still the most played sport. "FIFA are currently surveying professional players to gather more detailed information on the problems that they feel they have on each type of surface. To date, all the areas mentioned have been suggested as problems for players, but all research suggests that FIFA certified fields do not have any greater impact on these issues than high quality natural turf. It is important to note here that all of our tests use FIFA certified fields and we have no research data on these problems relating to fields that are uncertified."

Greg Fredericks, a former rugby player and currently involved in the installation of fifty-two artificial grass pitches in South Africa as part of the FIFA 2010 World Cup 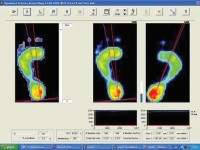 legacy, believes that a multipurpose field, that would allow use for both rugby and football, would be greatly beneficial, particularly in a country that is still divided along racial and sports lines. "Rugby is still a sport that is being played by predominantly white people, whilst football is the sport of choice for the black community. We will install fifty-two pitches which will be the legacy of the 2010 FIFA World Cup. When these pitches can be used by children of all ages and race, they would be the ultimate legacy achievement."

Fredericks is not concerned about the safety. A joint study in the US by Colin Fuller, Randall Dick, Jill Corlette and Rosemary Schmalz had already concluded, several years ago, that "there are no major differences in the incidence, severity, nature or cause of match and training injuries sustained on new generation artificial turf and grass."

The researchers analysed the National Collegiate Athletic Association's (NCAA) Injury Surveillance System for a two-season study of American college and university men and women's soccer teams, and recorded some 80,000 player hours. "I have played both rugby and football matches on surfaces that were much harder than those artificial grass football pitches, so this type of surface would certainly be a step forward. And I believe they will also be much safer," concludes Fredericks.