0 Are you breaking the law? 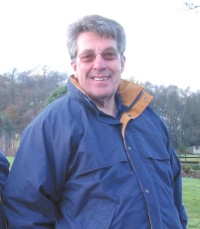 Most operators in the turf maintenance sector are concerned about compliance with legislation applicable to them, and do not wish to run foul of the law. Many believe they are aware of their duties and responsibilities and have taken appropriate action. It is evident, however, that some confusion still exists.

Here, David Mears looks at three main areas which, borne out by recent message board postings and enquiries, are probably the most topical

Oil and Fuel - Storage and Dispensing

Many groundsmen and greenkeepers will have a diesel tank to refuel machines, and will probably all store oils. To help comply with legal requirements; the Control of Pollution (Oil Storage) (England) Regulations 2001 and the Water Environment (Oil Storage) (Scotland) Regulations 2006, the Environmental Agency (EA) has produced PPG2 (Planning Policy Guidance). The following interpretation of the legal document and PPG2 will, hopefully, prove of help and simplify matters.

The Regulations require anyone who stores more than 200 litres of oil in England (or any quantity in Scotland) to provide more secure containment facilities for tanks, drums, intermediate bulk containers (IBCs) and mobile bowsers, to prevent oil escaping into the environment.

All oils are covered; petrol, diesel, mineral oil, heating oil, vegetable and plant oil (waste oil is covered under the Scottish regulations and by a separate act in England and Wales). 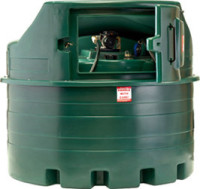 All oil containers (drums, tanks, barrels, etc.) should be situated within a secondary containment system (bund) which is strong enough and will not leak or burst under normal use. This secondary containment must be capable of holding a minimum of 110% of the capacity of the stored container or 25% of their aggregate storage capacity, whichever is greater. The base and walls must be impermeable to oil and water and must not be penetrated by any valve, pipe or other opening which is used for draining the system.

In simple terms, the best solutions for compliance are; install an OFTEC approved bunded (plastic or steel) diesel tank with integral pump and hose and place all of your oils on sump pallets. Petrol can be stored in a SiteSafe (or similar) or a Transit Box that holds 4 x 20 litre jerry cans. The transit box is also legal for placing on the back of an open trailer or pick up to collect petrol. Collecting in your own car, in a closed boot, is not permitted. You can only carry 2 x 5 litre petrol cans in a car.
In answer to a number of enquiries, yes, a properly bunded diesel tank can be placed inside the 'sheds', unless your insurers have any special requirements. It is as well to site this away from the rest area where food is consumed.

Best practice is to ensure that, whatever tank is used, it is top fill - top offtake. This prevents any chance of pollution, as would be possible if a bottom offtake tank were used. The practice of a tank raised up on blocks and using a gravity hose is definitely frowned upon. Consider the pollution possibility; knock the gate valve off and the whole contents flow out!

The use of single skin tanks is gradually being phased out, with many manufacturers reducing or stopping production. A number of companies selling these tanks previously have now delisted them and, so, their days are numbered. We know of a growing number of instances too, where tanker drivers have refused (and rightly so) to deliver fuel to non-compliant or dangerous tanks.

A document from DEFRA, which gives guidance, may be worth looking at; http://www.defra.gov.uk/environment/quality/water/waterquality/oilstore/documents/oil_store.pdf.

It may also be worth noting that, as the Scottish regulations are more encompassing, it is anticipated that the England and Wales regulations will be updated to a similar level. 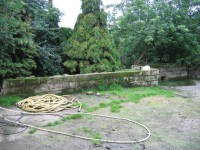 So much has been written on this topic over recent years and, yet still, there are a good number of establishments that are ignoring the demands of legislation, regarding cleaning machinery and equipment, with wash-off water going to ground. This is illegal. You need to comply with the new Groundwater (England and Wales) Regulations 2009, which came into force on 30th October 2009. Conformance with the EU Water Framework Directive is also applicable.

The Regulations, which are law, are very clear and state that you cannot discharge hazardous substances into the ground. Among those listed as hazardous in the regulations are: persistent hydrocarbons (that's oil, grease, petrol, diesel etc.) and persistent and bioaccumulable organic toxic substances. So, washing down machines into the groundwater, with these substances on them, means that you are breaking the law. To claim ignorance of this is no defence. 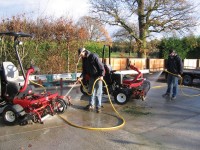 The EA is paying particular attention now to water resources offences (see Civil Sanctions notes later), and the installation of a fully compliant wash-off facility, with a dedicated washpad surrounded by a low kerb, should be a priority. The ideal solution, of course, is to include a water recycling system that, unlike discharge systems, will save many thousands of litres of water. A recycling system is "future-proof" too. If you choose an officially approved system, on the Water Technology List (WTL), you will have the added advantage of being able to make tax savings under the Enhanced Capital Allowance scheme (ECA). Ask your accountant to check this out.

A word of caution when considering a wash-pad solution; do thoroughly research what is being offered and make an informed decision. Not all so called "systems" are proper biological recycling systems, but glorified separators which discharge. Discharge from separators or discharge systems must go to the foul sewer and cannot go to ground. If you have access to foul, then you can install a separator (subject to your sewage company's approval), but do consider the regular pump-out costs, water wasted and that it may not be "future-proof". Reed Beds have been mentioned as a possible washpad solution too. These are fine for sewage waste, but have severe limitations when handling hydrocarbons (oil, grease, fuel etc.).

As a producer of hazardous waste - and you almost certainly will be; waste oils and fuels, solvents (e.g. aerosols), fluorescent tubes, gas bottles, TVs and monitors, batteries, etc. - you should be registered as such with the Environment Agency (EA) to ensure compliance with The Hazardous Waste (England and Wales) Regulations 2005 and The Waste Electrical and Electronic Equipment (WEEE) Regulations. 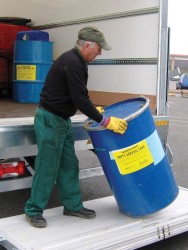 If what you produce is less than 500kg, you do not need to be registered. However, two barrels of waste oil alone will bring you up to this level! Registration must be made each year and you are provided with a Premises Code. You can do this directly with the EA, or your waste management company can do this for you as part of their service. Consignment Notes must be produced to move hazardous waste, and anyone carrying hazardous waste must be registered as a waste carrier. This effectively means that you cannot transport such waste yourself. Audit trails have to be established too so that, if you are inspected, you can produce the necessary documents to prove use, storage and disposal of product.

The best option is to entrust your waste management to a reputable company, licensed to carry waste and that will produce consignment notes and suitable containers for your waste.

Remember that you cannot mix waste now, and that is why it is important to have separate containers to maintain separate waste streams. If you care for the environment, you are probably interested in recycling and may wish to know what your waste management company actually does with the waste collected from you; why not ask them?

My own company, for example, operates a licensed waste transfer station, and has invested in plant and equipment to enable recycling of around 90% of the waste we collect via our own transport.

Typical, are the many thousands of plastic containers which are processed in a huge machine that produces small plastic chips. These then go to be moulded into useful rot-proof items, such as fence posts, seating, sleepers, etc., very often seen back at golf courses and leisure and amenity sites; Recycling at its best!

Remember that, along with compliance with legislation, you also have a 'Duty of Care' to ensure that your waste is properly disposed of.

The civil sanctions include:

Compliance notice: A requirement to take specified steps, within a stated period, to secure that an offence does not continue or happen again.

Restoration notice: A requirement to take specified steps, within a stated period, to secure that the position is, so far as possible, restored to what it would have been if no offence had been committed.

Enforcement undertaking: These enable a person, which a regulator reasonably suspects of having committed an offence, to give an undertaking to a regulator to take one or more corrective actions set out in the undertaking. 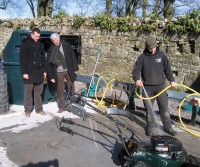 Third party undertaking: These enable a person, who has received a regulator's notice of intent to impose a variable monetary penalty for example, to give a commitment to take action to benefit a third party affected by the non-compliance.

Stop notice: A requirement for a person to stop carrying on an activity described in the notice until it has taken steps to come back into compliance
For a very detailed 64 page explanation, follow this link to DEFRA: http://www.defra.gov.uk/environment/policy/enforcement/pdf/defra-wag-guidance.pdf or visit; http://www.environment-agency.gov.uk/business/regulation/116844.aspx

You will see that various Civil Sanctions can be applied for offences relating to oil and fuel storage, dispensing, washpads and waste management.

Don't think it won't happen to you, actions are already being taken by the EA and they are on record as stating; "... initially, we expect to use Civil sanctions, mainly in the water resources and packaging waste sectors, for offences committed in England after 6 April 2010 and in Wales after 15 July 2010." VMPs (Variable Monetary Penalties) can be as much as £250,000; enough said?

The EA issues PPGs (Pollution Prevention Guidelines) and these are a most useful resource. It is advisable, if you haven't already done so, to go online, print off the ones that are relevant to you and retain them on file. I'd suggest the following in relation to the topics covered in this article: PPG 2 (Above Ground Oil Storage Tank), PPG 8 (Safe Storage and Disposal of Used Oil) and PPG 26 (Storage and Handling of Drums and Intermediate Bulk Containers).