0 Are you ready for the world’s biggest killer? 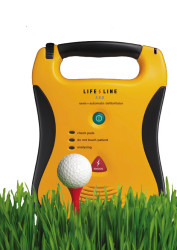 At sporting events, on your golf course, in the club house, in the office and at social events, the risk of cardiac arrest is very real. As a Duty of Care most sporting venues should now have AED's (Automatic External Defibrillators) on site in order to provide the best care for any incidence of sudden cardiac arrest that may occur on site. It is vital

Did you know that 140,000 people die from Sudden Cardiac Arrest (SCA) each year in the UK; it is the world's biggest killer and can happen to anyone, anywhere and at anytime. In the past a victim has had to rely on an ambulance crew to attend, but this severely reduces the chances of survival for the victim. Only 5% of SCA victims survive outside of a hospital, often whilst waiting for an ambulance to arrive.

SCA causes the heart's normal rhythm to suddenly become chaotic, where the heart is no longer able to pump blood effectively. The victim then collapses, stops breathing, becomes unresponsive, and has no detectable pulse. SCA can strike anyone and at anytime. Although the risk of SCA increases with age and in people with heart problems, a large percentage of the victims are people with no known risk factor.

The only proven way to treat SCA is by delivering an electric shock to the heart to restore a normal heart rhythm. This is called defibrillation and can make the difference between saving a life and having a victim die.

With an AED (Automatic External Defibrillators) on site, defibrillation can take place within three minutes and, on average, the chances of survival are drastically increased to 70%.

Ambulances have a target to arrive within eight minutes, reducing the victim's chances to very low levels but, with workloads and modern traffic problems, this response time is often much greater. Ambulance Authorities actually recommend and promote the deployment of AED's in public areas and the workplace in order to drastically increase survival rates.

With AED's located in workplaces, life saving care can be delivered almost immediately. Studies in the USA have shown survival rates in places such as shopping malls and airports increased from less than 5% to over 70%.

According to Martek, a leading manufacturer of AEDs, businesses often invest in the equipment after they have had an SCA incident occur, as they then realise how very real the threat is.

Sports clubs not only provide services to their countless customers, they also have a duty of care to their employees. Given the number of people present and the considerable amount of time and activity spent at the venue, the chances of someone suffering cardiac arrest are very real.

An AED is a portable device that analyses the heart's rhythm and prompts the user to deliver defibrillation shock if required. As a sports club, an AED may not be something that has ever been considered before, let alone investigated. It is therefore, recommended, by Martek, that when purchasing an AED that the customer looks for the following in an AED:

During an SCA incident the atmosphere will be chaotic and people in a state of panic. A good AED unit provides clear prompts for the user. This can include voice instructions and clear visual prompts.

If a victim is suffering SCA, CPR is often also required. An AED should therefore advise the rescuer on effective CPR compression techniques.

Some electrode pads on AEDs have extremely adhesive pads that can easily stick to the user's bare skin or clothing accidentally. These should not be over sticky, as precious seconds can be lost while removing and placing such pads correctly.

Check the electrode connections to the main AED unit and make sure the connectors cannot be pulled out easily. Given the commotion when using an AED, you do not want a unit where the electrode cable(s) can be easily unplugged.

Check to see that the unit has water-resistant seals. An AED will undoubtedly be used in the rain and placed on a wet fairway for example. Make sure there is a water-rated seal especially around the battery compartment. Also, another benefit is to have a non-slip handle for use with wet hands, and gloves if necessary.

Higher quality AED units can have their internal operating system easily updated via download, while some models require that you send the unit back to the manufacturer for upgrades.

• It strikes without warning killing 140,000 people per year in the UK

• 13% of workplace fatalities are from SCA

• It kills more people than lung or breast cancer combined

• It can happen to anyone. even young athletes

• Defibrillation is the only treatment

Anyone can suffer SCA; it is unpredictable and can strike at anytime. You are at higher risk from SCA if you:

• Have had a previous heart attack or heart disease

• Have a family history of heart problems

• Suffer from an electrocution

• Have an impact or trauma to the chest

At sporting events, on your golf course, in the club house, in the office and at social events, the risk of cardiac arrest is very real.