0 Are Your Bunkers up to Scratch? 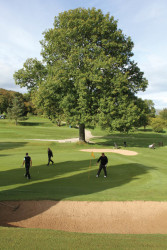 Bunkers and bunker sands have, yet again, been a topic of much conversation in 2010. Golfers seek the perfect bunker, one that is consistent, regardless of the weather. Where sand depth never varies and the ball never disappears from view, and every bunker on the course has to be identical in every respect. Whatever happened to a sand bunker being a hazard?

What is it that makes a bunker acceptable or unacceptable? Opinions seem to differ just as much as golfers' handicaps but, surely, bunkers must have some features in common that makes them more or less acceptable to the average golfer.

Bunker designs vary according to the whims or desires of the architect or designer and, of course, they vary along with the character of the golf course. But, surely, the sand is more or less the same in them all, so what is the problem with making bunkers work everywhere?

Well, sand may well be sand, but opinions vary about what does or does not constitute a good sand once it is placed in a bunker and, even when tests suggest it should be good, the golfer may not like it, perhaps because the way it plays or, maybe, simply because the appearance isn't quite right.

There are some factors that we can't do anything about. One such factor is the handicap of the individual golfer and how he or she likes the sand to play. We often find that low handicap golfers prefer firm sand which is quite shallow, whilst a higher handicap golfer may well prefer softer and deeper sand.
Unfortunately, they play the same course, end up in the same bunker, and come out with a totally different assessment of the bunker's quality.

Selecting bunker sand that will please every golfer and greenkeeper is, perhaps, as close to impossible as we are ever likely to get. But, in the testing laboratory, we can, at least, go part of way to selecting sands that might be acceptable to golfers.

Putting a technical spin on sand selection is only the start. Having found sands that technically appear suitable, we must then subject them to field testing, on the golf course, to establish whether they are, indeed, suitable for use, bearing in mind the design and location of the bunkers and the expectations or preferences of the golfers themselves. We have to start somewhere, and subjecting sands to technical assessment will, at least, shorten the list by rejecting some that will never be suitable.

Historically, some golf clubs have always purchased local sand, because it was cheaper than others from further away. It might or might not be good for the purpose but, in these days of budget constraints, it might be used out of necessity. A few tests can help the selection process for sands, and may help to avoid buying in problems in the form of sand that will never be suitable.

Unfortunately, sands are not all the same, they vary in several ways - in composition, size, shape and colour. And, because they vary in these ways, we also find that they vary in drainage rate as well as how they pack down, and, in particular, how they play and adhere to the bunker faces, remembering that some faces are 30cm high and others are close to 3m high.

It is the role of the specialist testing laboratory to look at the various characteristics of the sands being considered, and then to identify those that might be suitable, and which, if any, might be preferred.

The first step after identifying sand suppliers is to get samples to the testing laboratory. Send about 5kg, and ask them to run the samples through a series of tests for potential bunker sands.

An obvious and easy test to undertake is by matching the sands with colour charts. Some clubs prefer white sand, because they value the contrast of white and 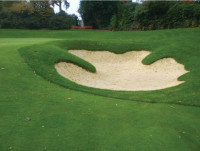 green. It may well look very attractive at the outset, but it can soon become dirty and require replacing so often that it becomes a budgetary nightmare.

Some players love the appearance; others hate the glare that white sand creates on a sunny day, even though sunny days happen only rarely. Occasionally, an owner or a committee ask for a sand that fits the local geology and soil, they want one that blends in and plays well. How enlightened they are.

Having received the samples, the first test is to determine the grading or makeup of the sand, by running the samples through a nest of sieves. The procedure for this test will give very accurate results, but it doesn't test the entire supply, and sand grading might change slightly with time. If you can, get hold of some older test results and check for any obvious changes.

Coarser sands may result in surface abrasion, whilst finer sands may well cause perching or increased surface wetness on greens built with a USGA rootzone. Even though this sand grading is the one we'd all opt for, it is no guarantee of consistent playing characteristics. However, sands of this grade are more lik

ely to be good bunker sands than others which lie outside the range. How the sand plays will still depend on maintenance and, of course, moisture content. The sand that drains well and plays well throughout the winter may be deemed too soft and unacceptable in a dry summer.

The laboratory will include a measure of uniformity for the sand (CU) and this will give a good indication of the spread of different particle sizes.

A good bunker sand is clean. If it contains silt or clay, it will tend to crust and will be at risk of draining slowly. The test for particle size will include silt and clay levels as a norm.

When we select materials for drainage, a round particle is often preferred, because the material flows more easily into the trench. In a bunker, a round sand particle will do much the same - it will move easily and, so, each time it rains, the sand will wash away from steep slopes. Angular sand is, therefore preferred. You will also find that an angular material will pack down more firmly and will resist balls burying into it. There are degrees of packing down of course, so be careful. Going for something which is too angular may leave you with a bunker that bears more resemblance to the M4 than a sand trap.

Most sands contain quartz or silica. A hard, quartz sand is preferred in bunkers because it retains its shape and resists weathering. Sands that weather, or break down too easily, may well become compact and seal, requiring more attention from the maintenance team. Some sands come with a large amount of limestone attached to the sand grains, and the laboratory will pick this up when they test the pH.

If the pH appears high, the laboratory will usually undertake a simple "fizz test" to determine how much limestone is present. If there is too much, the sand grains will weather and become smaller in time, so the drainage rate and playing characteristics will also change.

If you use a high pH sand, bear in mind that splashing this onto your greens may well affect soil pH and perhaps increase disease incidence.

I love this test, because it involves mathematics, and it informs us about the maximum angle of bunker face that we can construct and still keep the sand in place. Generally, we'd look for sand with an angle of repose of say 35Oor more.

Some designers build near vertical faces in their bunkers and, when we are faced with using sand that can stay in place on a face no steeper than 40-45O, it's no wonder that bunkers become sources of discontent within the golf club.

This test isn't done on all sands and some laboratories don't offer it, but ETL finds that the angles vary with particle shape and distribution, and it is a piece of the jigsaw that that may help predict sand behaviour on flashed bunker faces, the probability of fried egg lies.

Not everyone asks for this test because, once they have seen the particle make up of the sand, they can often tell whether or not the sand will drain well. It is a piece of the jigsaw, and adds information about how the sand will perform initially, though, of course, with time and contamination, drainage rate will decline.
Having a sand that drains freely often has to be balanced against the sand being too soft in dry weather and, although the laboratory can put numbers on the performance of the sand, the final decision rests with the club to decide whether or not the balance between drainage rate and firmness of the sand is the right one.

A simple penetrometer test is the best measure of sand firmness that we have at the moment; it's not perfect but, added to the other information, it helps to predict performance.

Having tested the sands and found some that might be suitable, test them insitu and let the golfers report back on how well or badly they play. Before you put the new sand into a bunker, make sure the old sand has been removed, otherwise you don't get the playing characteristics of either sand, just an unpredictable mish-mash of what might be two very different materials.

If you leave old sand in place, and cover it with a new material, the old sand will eventually come through, unless you ban golfers from using rakes.

Given a bit of help from nature and the powers that be, you may get good feedback from the golfers and can then proceed with a sand replacement programme.
Hopefully, the new sand fits the bill, until it becomes contaminated or the sand supply runs out, and then you may have to start again.

Using a laboratory can take away some of the guesswork from sand selection, but always bear in mind that bunker design, climate and golfers vary enormously. You may never reach the Holy Grail of golf, i.e. the perfect bunker sand for all seasons and all courses but, if you do find this, you're well on your way to making your fortune.