0 Are your green surrounds a neglected area of your course?

Are your green surrounds a neglected area of your course?

By Emma Beggs-STRI Turfgrass Agronomist for the North West

As golfers demand ever better putting surfaces, we spend increasing amounts of time, resources and improved techniques developing these close mown areas of the course. However, how much time do you spend on improving the surrounds and approaches to these areas? A great many shots are played from surrounds and approaches by golfers who narrowly miss the putting surface, often with a good shot. Giving them options to play a variety of recovery shots is an important part of the game. To provide options, it is essential to have a good cover of firm, dense turf. Many clubs are beginning to realise that this important area of the course is falling behind the standards now set by the adjacent greens. How can we realistically make improvements?

First of all we need to determine what likely problems may be encountered on surrounds and approaches. They may comprise the following:-

On some new courses a great deal of time and effort is expended on green construction but far less on ensuring sufficient depth of good quality growing medium is used to build the surrounds. This can result in poor growth and a dominance of annual meadow-grass. Furthermore, a deficit of material or a poor quality material can often result in poor drainage.


· Often localised areas of the surround or approach have to take a significant amount of foot traffic as golfers exit through a confined area towards the next tee. This may be due to a design problem, the placing of greenside bunkers or surround mounding channelling the passage of golfers.

· Overly severe contouring can make mowing difficult and even result in scalping of higher areas and the missing of low spots causing uneven grass growth and a less than satisfactory surface from which to play.

· Perennial ryegrass contamination can be a problem, resulting in clumpy and uneven growth habits providing inconsistency of the playing surface.

· Increased levels of winter play put additional pressures on the turf at a time of year when there is little growth or recovery and areas of weakness develop.

· High levels of earthworm activity and resultant weed contamination can also be a problem on surrounds and approaches where soils are not as sandy as beneath greens.

· Insufficient attention to routine maintenance, perhaps consisting of mowing, the odd application of fertiliser and little else. 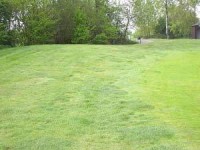 When asked how to improve these areas we often recommend extending as many green treatments as possible out onto these areas, but what can we realistically expect to carry out in a season? Hopefully the following points will help you to plan a more effective work programme to improve the presentation of these areas, improve the quality of the turf and in turn frame the greens more attractively.

· Areas that show a lack of depth of topsoil need to be top dressed to build up a reasonable depth of growing medium. In such circumstances, an organic-based dressing is often recommended, applied at least twice but preferably more often during the growing season.

· Mowing should be carried out at least twice per week but up to three times per week if faster growing ryegrasses are present. Mowing heights for these areas vary greatly but will normally be between 8 mm and 15 mm. Clippings should be boxed in most cases except where there is a lack of topsoil. Here, clipping deposition can be of benefit.

· Aim for a monthly verti-cutting pass during the growing season. If you have a set of the tungsten-tipped thatchaway verti-cut units, these can be used effectively with less wear and tear to the blades. This is particularly important where perennial ryegrass contamination is affecting uniformity. Perhaps verti-cutting treatments on the greens can be extended onto immediate surrounds/approaches.

· Include these areas in the greens fertiliser programme.

· Try to top dress these areas every time you top dress the green, hopefully aiming for at least four applications during the growing season.

· On specific weak areas carry out a late summer renovation programme to include scarifying, hollow coring, top dressing and over seeding before roping off and redirecting traffic where necessary.

· Where a lack of irrigation facilities is a major problem/constraint then such matters should be addressed.


By implementing as many of these techniques as possible on a frequent basis, it should not be too long before good improvements to the texture and density of the turf and general presentation are noticed by the members and visitors to your course.