by Renata Mundim Ribeiro
in Football
on 04 May 2014 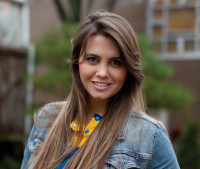 On the east side of São Paulo, in the Itaquera neighbourhood, The Arena Corinthians is being built to host the opening of the 2014 World Cup in Brazil. The stadium has a capacity for 48,000 but, during the World Cup, the seating will be increased to 68,000 with the addition of 20,000 removable seats. Renata Mundim Ribeiro, GlobalTurf Network Biologist, reports how the new stadium project, initiated in May 2011, is progressing.

According to a consultant study, the 2014 World Cup event in São Paulo will have an economic impact of R$ 30 billion over 10 years (around US$14 billion). The Arena Corinthians is built in the most populous part of the city, and its location was chosen to encourage investments in the region, generating improvements in quality of life of local people.

Over 2350 workers have been employed. Unfortunately, during the building of the arena, a crane collapsed damaging the structure and killed two employees. The arena was due to be finished in December 2013 but, due to the delay, it is now expected to be completed in April 2014.

One of those responsible for Arena Corinthians' turf is the engineer agronomist, Artur de Melo. With over two decades of experience in turf care, he has been assisting the development of the grass and has implemented techniques never before used in Brazil. Let's learn a little bit more about the work in Arena Corinthians...

At what stage is the pitch?
It's important to know that the pitch in the Corinthians Arena is considered to be extremely unique. We are using a year round turf, a 'winter' or C3 grass in Brazil, which is a tropical country. In the southern part of Brazil, cool season turfgrasses are used with success, but to try this far north in São Paulo is a real challenge.

The Odebrecht Company, along with the World Sports and PM Consulting, developed the project and produced a schedule of work. We decided then to sow one year before the World Cup and, since September 2013, the turf has been in perfect playing condition.

To make this possible, we have installed vacuum drainage, which can carry both negative pressure system to accelerate the removal of water from the ground, and also the capacity to pump air into the soil profile. This system is not new to some of the stadiums in Northern Europe and USA. The system allows for cool air to be pushed into the soil. We have about 35km of pipework that circulates chilled water in the soil (sandy substrate). Using the powerful chillers, we are keeping the soil temperature within the ideal range for the perennial ryegrass to grow and develop, even during summer, which this year was the hottest in decades, with ambient temperatures around 38C.

The deadline for Arena Corinthians is April. Are you optimistic about the date?
Odebrecht company is not only one of the largest construction companies in Brazil, but it is also one of the largest in the world. The company has fantastic staff and expertise, which not only keeps me optimistic, but also believing that the arena will be ready on the expected date and will be one of the best in the world. I have no doubt about that.

What is the origin of the turf used in Arena Corinthians?
The seed we used is imported from USA.

What were the challenges you faced with the pitch?
We have faced problems but, given there is no pitch quite like this, I think we are OK. We have faced problems like delays in getting supplies and the installation of the artificial support systems previously mentioned. At one point, we used ice bars in the irrigation water to lower the temperature of the soil, when the cooling systems were not completely installed.

What is needed to improve the surfaces of soccer stadiums in Brazil?
It has been improved greatly in the past twenty years. Whoever says otherwise has a short memory and does not remember that Zico, Socrates, Falcão and other great players used to play on sub-standard pitches. Not long ago, superstar players like Romario and Bebeto played on poor pitches.

Of course there are still bad pitches even in Series 'A' stadiums, but this is due today, exclusively, to the lack of investment in the fields and the continual use of the pitches. The lack of investment and vision of the 'owners' of the fields are the reasons for the impoverishment of Brazilian stadiums. Nowadays, it is not difficult to find in Brazil manpower, machinery and supplies for the development of excellent turf. I make this statement with conviction.

What is needed to improve the management of sports fields in Brazil?
Investment and a better schedule of games, not only for athletes but also for the fields.

Recently a TV programme was presenting a debate about misuse of soccer fields in Brazil. Some stadiums host five games a week, which might cause irreversible damage to the turf. How do you see this behaviour?
Until recently, it was a common that Rio de Janeiro's most popular stadium, Maracanã, for example, would have two-hundred events in 365 days. Events include games, concerts, films, etc. Even in the Engenhão stadium, it was common to have games on Wednesdays, Thursdays, Saturdays and Sundays, with double rounds (preliminary) every week. A group of players, established in the last year (the 'Good Sense Soccer Club'), has been demanding a more rational schedule, so that there is enough recovery time for athletes. We need the same kind of recovery time for the field. A rational calendar is essential to good pitch.

We have enormous challenges. Often the layman does not realise, but we need to remember that over the last fifteen years fields have been reduced in size from 110x75m to 105x68m, having less than 1.110m2 playing area. During the same period, players who ran three to four kilometres per game, started running six to eight kilometres. Soccer boots evolved with more studs and blades, which give greater traction for the player but also greater physical damage to the field. Modern stadiums, designed for beauty, comfort and safety of visitors, often have inhospitable environments for maintaining turf (shaded, damp and unventilated).

What are the expectations for the Arena Corinthians during the World Cup in July?
Despite the fact that the stadium is completely new, and that we have the opening ceremony (which is always a problem for the turf) and six games during the Cup (various stadiums only have four), we are very confident that we will present a good pitch to players and to the eyes of visitors.