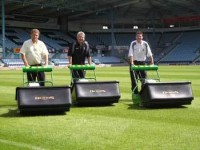 Coventry City FC's new Ricoh Arena stadium is something special. Paul Fletcher, Chief Executive of Arena Coventry Ltd, which has co-ordinated the development, has said that if soccer grounds were cars, the £113-million facility would be a top-of-the-range BMW.

You can see his point. Sponsored by Ricoh, the eighth largest IT company in the world, the 32,000-seater stadium is part of a complex that also includes a 10,000-capacity exhibition hall, as well as the largest Tesco in Europe.

But the Club's focal point is the state-of-the-art pitch, which is overseen by Head Groundsman Michael Finch. Incorporating undersoil heating and an SIS XtraGrass sward combining plastic fibres and natural grass, it is in perfect condition. He intends to keep it that way until long after Coventry's first fixture in August.

Choosing the right maintenance machinery is crucial, especially the mowers that provide the immaculate surface finish. Michael, whose Highfield Road pitch has been rated in the top five for the past two years, only specifies the use Dennis G860 pedestrian mowers. The Club has six in all, two each at the Arena, the training ground and the Club's Academy for young talent. With the sole use of Dennis pedestrian mowers, Michael maintains his first class, uniform playing surface throughout the club.

"Dennis mowers give us the precise, sharp cut we need for the best possible presentation. The company has a reputation for high standards, as does the Arena." states Michael.

The 34in (86cm) G860 has a 6.5hp Honda engine and weighs only 166kg. It incorporates a steel-geared differential in an oil bath for easy turning without scuffing turf, and a cast, 3-section aluminium ribbed roller ensures positive traction.

The G860 can also accept interchangeable cassettes for other essential tasks. Given the mower's excellent cutting performance, this versatility is an added bonus. The Club has scarifier and brush cassettes and, as Michael explains, "less kit has to be bought, boosting our cost-effectiveness."

"The G860's simplicity is also something I appreciate. It's straightforward to use and service points for routine maintenance are easily accessible. Mowing height can be adjusted quickly and the Honda engine is excellent."

In his quest for the highest standards, Michael has been able to work with Dennis technicians to customise his G860s. Alterations include a modified front open-groove roller and comb assembly that flicks up the grass, enabling the rear mowing cylinder to cut with even greater accuracy. A clearing brush has also been fitted to the rear roller, in place of the scraper.

"Dennis is a British company with a long tradition of engineering expertise," says Michael. "Being able to work with them in a spirit of co-operation has been invaluable. I've also benefited from input from engineers at my local Dennis dealer, Parks and Grounds. Everyone is prepared to listen and come up with solutions."

Michael and his staff will cut the Arena pitch 4-5 times a week in summer, twice weekly in autumn and every 10-12 days in winter. Two members of staff also mow it on the morning of every match, to ensure a true finish.

Michael appreciates the G860's light weight. "Heavier mowers would compress the turf. It may take a bit longer to cut with pedestrian units, but the end result is worth all the effort."