0 Arising from the flood 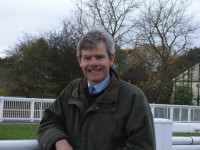 In recent years, Worcester has become best known as the course that switched its jump racing to summer to avoid being flooded when the adjoining River Severn burst its banks - only to disappear under water in July 2007 with the summer deluge that affected much of the country.

Ongoing investment by operator Arena Leisure has enabled Clerk of the Course, Fergus Cameron, and Estates Manager, Tim Radford, to get water off the course and help the turf recover quickly, should the worst happen now. The British summer being what it is, the river can also be used to the course's advantage, providing valuable irrigation water in a relatively dry season such as 2010.

Trainers are understandably sensitive to the risks of firm going for horses jumping fences at around 35mph - as well as being too wet, it can easily be too dry for racing.

This summer, 1,142 horses ran at the course's seventeen racedays, averaging sixty-seven per day, or nine per race. An impressive total for jump racing's 'low season', proving that the team's efforts have worked. 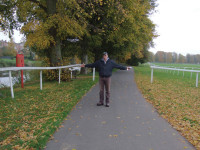 As winter draws in, Worcester looks very different to the image presented on its summer heydays. At the end of the season, the nine steeplechase fences and six French-style brush hurdles are taken into storage - before they float away, Tim jokes - and their condition assessed. Half of the steeplechase fences are replaced each year.

Staff are also deployed elsewhere, as Tim explains: "We have a small full time staff, as we only race for half the year, so two groundsmen go to (sister Arena Leisure course) Wolverhampton, and I will spend some time at Wolverhampton, Southwell or another course within the group. We rely heavily on seasonal staff, starting off the new season with eight temporary groundsmen. I'm fortunate to have some experienced machinery operators who come back year after year."

With the course clear, attention is turned to drainage, with improvements made in 2010 by contractor, D W Clark Ltd., to the top end near the river and the viaduct bend, where the course meets the town centre.

"There's a gradient between the hurdles and chase course, and irrigation water runs across, so we're building a new catch drain to alleviate this, which will flow into the existing ring main," explains Tim. "Laterals are also being added from the furlong marker to the half furlong point." 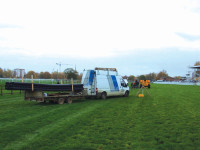 Drainage is an issue - even on the higher ground. In the back straight the drains run into the river but, when the flood level drops, water can still sit in hollows on the raised ground.

"There is a valve to stop the drainage water backing up into the drains when the river rises, but it does come through the land drains, so it is a constant battle in wet periods," he says.

The viaduct bend needs particular attention as the course narrows here and, although the racing line is stepped out after every meeting to provide fresh ground, in June and July, when racing takes place every week, it is just three or four weeks before a particular area is back in use.

So, as Fergus Cameron explains, every effort goes into helping the turf recover from the impact of galloping hooves and from any standing water. 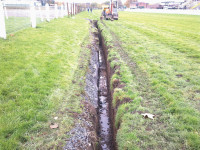 "We aim to vertidrain three times a year - in the autumn once the main drainage works are completed, in April and mid-season - to encourage deeper root growth and relieve the compaction that the weight of flood water causes. We also slit before irrigating to make maximum use of the water and encourage it to move through the soil profile, giving the most consistent going that is possible."

Irrigation water is pumped directly from the river, and Tim comments that the course has a generous abstraction limit. Application is via a pipe and sprinkler system, and it takes six pipe moves to cover the whole course, a labour intensive process, particularly at the end of the season when there are generally fewer temporary workers available.

"We can apply up to 30mm of water per meeting and, although it is needed to provide the right conditions for summer jumping, it also creates optimum conditions for the action of the horses' hooves to cause compaction, so it is a constant juggling act," says Fergus.

Each spring, the team has the challenge of dealing with whatever the winter has thrown at the course.

"We try not to do too much in the autumn, as all the work can be undone by a wet winter, which can be disheartening," comments Tim.

If there is not too much damage, reseeding begins in February, along with grading take offs and landing for steeplechase fences.

"As we remove the fences each winter we can easily resite them if it is perceived that their position has caused a problem, and this course of action will be considered in the spring, too," explains Tim.

In conjunction with turf agronomist, Mike Harbridge, Fergus and Tim have developed a seeding regime based on varieties which offer fast recovery from wear to meet the demands of the busy summer programme. 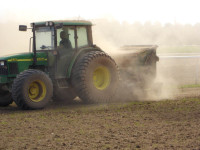 "We use Esquire Platinum and Verdi from Johnsons, treated with Growmax to get fast germination," Tim explains. "The seed is stronger and comes through much more quickly."

But, the post race reinstatement has also become highly influential in the course's readiness for the next meeting, with a new divot mix from White Moss Eco Supplies - a blend of medium grade washed silica sand and PAS 100 certified green compost - 'working wonders', he reckons.

"We aim to reinstate the track after each meeting within 24 hours, and every day makes a difference in the amount of recovery seen," says Fergus.

The seeder, like the vertidrain, is shared with other courses in the Arena Leisure group, but Worcester has its own equipment for routine maintenance, including three John Deere tractors and a 4.23m Votex front mounted mower. A new addition for 2010 was a Trilo blower, mounted on the tractor's rear linkage and used in conjunction with the mower. 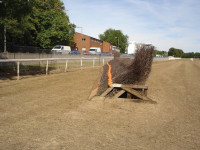 "The blower has been extremely useful," comments Tim. "It stands the sward up after mowing and clears the clippings, giving a cleaner cut and eliminating the clumps of grass that can accumulate on the turf. Mowing takes place three times a week in the season, and takes eight and a half hours each time, thus tying up significant labour at a busy time, so combining two jobs is useful."

Fergus adds: "There's a balance between watering, feeding the turf three times in the season and the amount of growth that is produced, and the blower prevents the clippings from becoming a problem."

Worcester Racecourse is sited on council owned land at the heart of the city, which is leased to Arena Leisure, so public access is another part of the challenge.

"The stables and buildings are monitored by CCTV," comments Tim. "But, we have issues with jumps being set on fire and rough sleepers trying to get into the grandstand. Officially, we could close the course for seven days before each meeting, but it is important to maintain a good relationship with the public, so we restrict that to two hours ahead of racing."

Keeping the neighbours happy is also important, with housing situated close to the course, so tasks such as using blowers and mowing are avoided in the early mornings.

Taking care of health and safety is an important part of Tim's role, not just in supervising casual staff who are using large machinery in a public area, but also in ensuring that the many events which take place at the racecourse go smoothly. 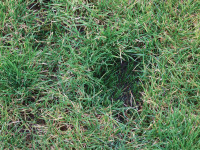 "The course buildings are in use nearly every day of the year for conferences and functions, generating important income for Worcester Racecourse," he says. "We don't, however, use any of the outside area in the summer as it would be too difficult to manage with so many race meetings."

Fergus comments that Arena Leisure has shown faith in Worcester Racecourse's ability to contribute to its portfolio by investing in the drainage work, upgrading the stables and grandstand and other aspects, such as purchasing the French hurdles required by the regulator. The company's investment is now clearly paying off.

"The programme of summer jumping was extremely successful in 2010 and will be repeated this year," says Fergus. "Our aim was to build fixtures that would ensure the sustainability of Worcester Racecourse, and I am very proud of the way that the team has worked to provide the sort of consistent going that continues to attract entries from leading trainers."