0 Around the Prem in Twenty Pitches 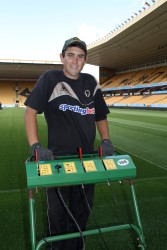 I am currently a Groundsman at the Premier League club Wolverhampton Wanderers, I have been working for Wolves for two and half years now in which that time I have obtained a sports turf qualification, which I studied at South Staffordshire college.

During my time at Wolves I became runner up in Lantra's apprentice awards, in which I was presented with a "Highly Commended Apprentice Award".

So for Comic Relief I want to go one step further!!

I want to be one of the only people I believe to mow every single one of the 20 English Premier League Football Clubs this season.

I don't necessarily mean every square inch of every pitch but at least one width of the mower or even the turf that is on the outskirts of the pitch would be great to achieve.

So far to date I have completed seven out of the twenty pitches, these are as follows Wolverhampton Wanderers, Stoke City, Birmingham City, Aston Villa, West Bromwich Albion, Newcastle United & Sunderland.

My aim is to have all the pitches completed by Red Nose Day, Friday 18th. March, but it may run over slightly due to different circumstances of some of the Clubs.

My Comic Relief Event as already been publicised twice in the Express & Star and I have also been interviewed on BBC Radio Shropshire. Any Media attention that this Event receives could possible mean more money raised for such a good cause.

By fundraising or donating this Red Nose Day, you're helping to change lives forever. That's because Comic Relief spends all the money raised by the public to give extremely vulnerable, poor and disadvantaged people in the UK and Africa a helping hand to turn their lives around.

For more information please contact myself Chris Lane on 07805 039435 or via email on chris-laney@hotmail.co.uk or visit my sponsorship page my.rednoseday.com/chrislane