Bootboy, committee member, groundsman - you name it and Stephen Connelly has done it for the love of his club 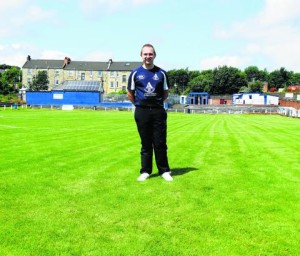 While the Arthurlie players and management have been sunning themselves on holiday, Connelly and a hardy bunch of Lie fans have been down at Dunterlie day on day, night on night, giving up their free time, money and labour to ensure the pitch and stadium is ready for the new season.

The 22-year-old may be a young face among the junior masses, but as the youngest groundsman in the league, his hard-work is a credit to his club. Three years in the 'job', Connelly balances the daily grind as a lifeguard at Eastwood Pool with a committed approach to the playing surface in Barrhead, finding the time to joke, "Some may argue there is more water on the pitch than their is in the pool in Eastwood," - but not on his watch.

By his own admittance the park took 'a bit of a battering' last campaign. However, Connelly takes great pride in the fact none of the side's call-offs were as a result of rain water, but instead of the snow which reaped havoc across the juniors in February. Even then he and his team were out early doors trying to rid the Barrhead pitch of snow and ice, and their hard-work almost paid off before a controversial call from match officials led to the postponement of their much-maligned Scottish Cup tie with Kirkintilloch Rob Roy.

Now, with the new campaign looming, Connelly is in his final preparations and admits it is great to see all his hard-work pay off.

He told Barrhead Sport: "At the end of each season I set out the Dunterlie Park maintenance plan, focusing on the pitch and the surroundings. I ask around for volunteers to help with the work as it would be impossible to do it all on my own - and to be fair this year we have done very well.

"There was a lot of work to be done, with the pitch the main focus, as well as painting, clearing the drains and fixing the terrace which we are still in the process of doing. The slabbing work is still ongoing, we have around 40 slabs to cement in and level but after that we should be good to go - any help with this would be great.

"The supporters help with their time, effort, materials, tools, and even chip in with money. Financially this can be a big job and without people digging deep we wouldn't be able to get all the work done.

"I want it to be the best it can be, and I think it is. The work never stops but it will be nice to see it once the season gets under way."

Connelly's voluntary work goes a long way to ensure that the Dunterlie surface is flat and ready for action ahead of the new season.

His efforts take a huge chunk out of his own time - not that he is complaining, as it is something he happily offered to do following years of being in the background of part of the team he now leads.

He said: "I've followed Arthurlie for a number of years. I used to be one of the volunteers who would come down, do the grass cutting, weeding, anything I could to help really.

"Then I was bootboy, then I joined the committee. But I took a bit of an interest in the grass cutting and would help Ian Mochrie who was doing the job at the time.

"I would help Ian before gradually over time I took on the role. Ian was groundsman for a number of years and put in a lot of hard work during that time. He is still on hand to help out and has been invaluable if I'm honest.

"I need to balance it with my job but if I can I'll be down at the ground three or four days a week, basically if I'm not working I'm down at Dunterlie.

"Some people think I'm off my head."

With work nearing its completion Connelly isn't prepared to rest on his laurels.

Dunterlie may be primed and ready for action, but the groundsman is already targeting better next year.

Playing surfaces in the juniors seem to improve each season, and Connelly admits there are a few that he looks up to.

He added: "The top three surfaces in the juniors are Auchinleck Talbot, Troon and Irvine Meadow, that is what you aspire to be like. But with that you need money.

"I'm always looking for ways to improve the place, and I will if I can, I think the efforts that everyone have put in have been brilliant.

"The club genuinely appreciates the support and without their help none of it would have been possible."

For the original article, visit www.barrheadnews.com.